Michael Shantz has been a name in the art world for over ten years, and his originality and unbelievable work ethic continue to win him fans the world over. His bizarre characters and unique style have made him a must-have for any art lover or collector.

First of all, tell me some things about yourself. Where you were born, where you live and what exactly it is that you do for living.
I was born in British Columbia, on the west coast of Canada, in a small town called Salmon Arm. As for work, I mainly do illustration, branding/ art direction, and painting.  I also have my hands in a LOT of other projects that include, fashion design, toys, music and co owning a couple rad lil lifestyle brands.

Where do you draw your inspiration from?
Honestly, I think the majority of my inspiration comes from the era I was raised in, the 80/90s, and all the insane shit that was just normal, apparently, back then.  I remember every toy I had would either have ooze in them or would squeeze out! Everything was neon and had thrash metal vibes. Everything was gross, and I loved it!  I’m also heavily inspired by Japan – fashion, music, history, legends and myths, and well as manga and anime.  Every Studio Ghibli movie was like the bible for me, as well as Akira and Evangelion (I still watch them all regularly). Tim Burton is also a major influence in my style and character design aesthetics. I like to call it pop goth, haha.

What’s your favourite genre of music?
I listen to a lot of hip hop, Flatfish Zombies, The Underachievers, Danny Brown, Action Bronson, Dylan Ross, Bones, and Grimburton. I also support and love My Juggalo Family, Abstrakt Sonance and Pixy !!! I used to listen to a lot of black and goth metal as well, and to this day LOVE the theatrics of black metal. I feel like it’s a grim version of Japanese kabuki, and I really love how over the top it is. It’s definitely a huge inspiration for my work as well. 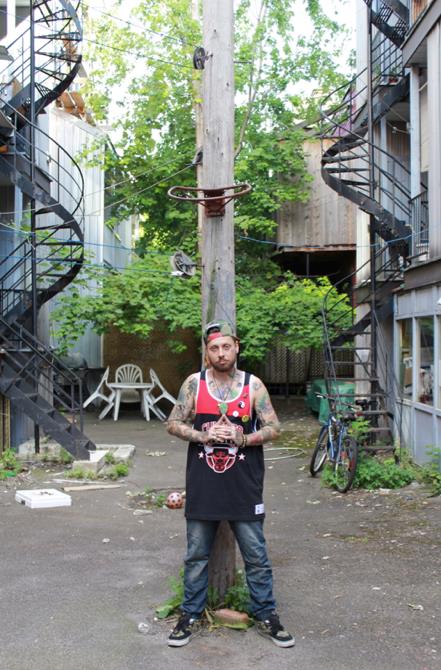 What do you hate most about your job, and what do you love? What have been career highlights so far?
Part of mainly working freelance is never fully knowing if you have work coming up. I can contact brands all day long looking but it takes over my entire life sometimes, and there have been times where it has stressed me out like I’ve never experienced before. I hate that side of this work.
But when I stop and think about it, even with that side of it, I’m doing what I love, and I’d rather be stressed about art than stressed flipping burgers and miserable at a 9-5 job. Highlights… oh man, there’s been a few over the years… the first was definitely being offered a job in the UK with Drop Dead, as it was a big step for me going from drawing in my bedroom on my computer to organizing a full season of new gear for such a big brand. I learned a lot there.Another was getting to do album art for The Left Rights. I have loved MSI (Mindless Self Indulgence) forever and I met Steve Righ at the Kerrang awards after party in London. We started talking about art and weird shit, and a year later, after I figured he had forgotten about me, he contacted me. And the rest is history. And, of course, working for Mishka has been amazing. They have been one of my favourite brands and being able to do anything for them would have been rad, but I’ve gotten to design the ‘shanty’ watch and exclusive SF designs alongside superstars like Lamour Supreme and Kozik.

How do you imagine yourself ten years from now?
Still doing art, still in love with art, still hating art and still learning from art.