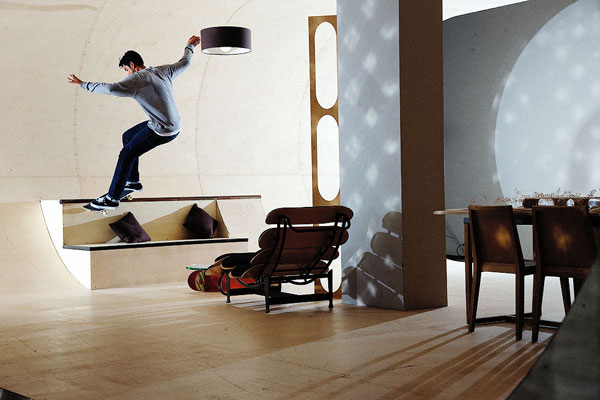 The PAS House is the project of a private residence located in Malibu,California.What is different about it is that, due to its construction, you will be able to skateboard any areas and surfaces, either indoor or outdoor. The creator is Pierre Andre Senizergues, a former World champion and Pro Skater, Founder and Owner of Sole Technology, a Socal based Skateboard footwear and apparel Company leader in the Action sport industry with brands like Etnies, Emerica, Es and Altamont in collaboration with designer Gil Lebon Delapointe and the LA based architect, Francois Perrin. The house is divided into three separate spaces. The first one includes the living room, dining area and kitchen, the second one includes a bedroom and bathroom and the third one a skateboard practice area. The owner will be able to go from one space to another easily just by using his skate. The furniture is also skateable whereas the closets and drawers are made up by curves as to help the performer. It is the ultimate dream for generations of skateboarders who wanted to bring their practice into their actual everyday life .In the practice of Architecture, it also represents a groundbreaking in the construction of a non Euclidian geometrical space with a continuous surface that creates a new experience of the domestic space, more fluid and dynamic and reflecting of our 21st century lifestyle. A model of the project and a full scale prototype of the Living area was recently presented in Paris for the exhibition Public Domaine/Skateboard Culture at La Gaite Lyrique, a New museum directed by the City of Paris.