Georgio de Chirico was one of the most prominent painters of surrealism but his Greek origins are little discussed in relation to the movement. Surrealism developed out of the absurdist Dada style in addition to the work of Sigmund Freud to produce a creative process inspired by dreams, psychoanalysis, solitude, existentialism, and chance.

De Chirico was born in Volos, a port town which features in the classical myth of Jason and the Argonauts, in 1888 to Italian parents. He is often characterise as an Italian painter due to his parents’ origin and the fact he lived in Italy for some years but he also lived in Germany and France at different points in his life. He went on to study at the Athens School of Fine art and in his memories de Chirico is quoted to have said “…all of those spectacles of exceptional beauty that I saw in Greece as a boy, and that are the most beautiful I have ever seen to this day, affected me so deeply, they are so powerfully impressed in my soul and thoughts.” In 2007 the Onaissis Cultural Center hosted an exhibition of his work exploring this relationship and his Greek roots.

References to mythology and classical sculpture feature regularly in his work which we take a look at below: 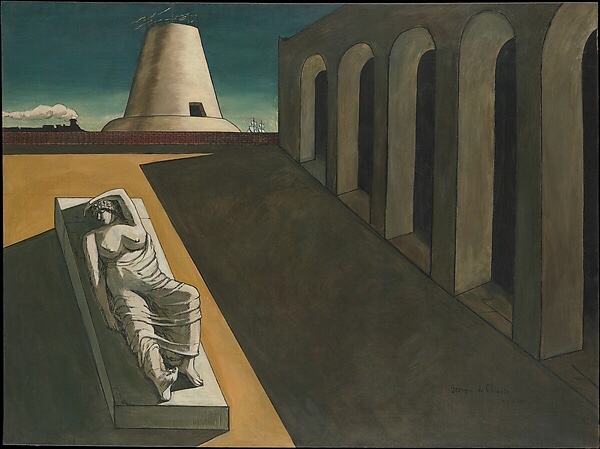 After moving to Paris in 1911, de Chirico became lonely in the big city. Some have interpreted the classical figure of Ariadne as symbol for a kind of home sickness for his childhood spent in Greece. In the myth, Ariadne is left alone by her lover Theseus on an island while she was sleeping. Perhaps de Chirico relates to her moment of isolation but transports the subject into an imagined urban environment, drawing in the influence of the Renaissance squares such as the Piazza Santa Croce in Florence which he saw when he lived in Italy, another symbol of home. The train in the background reflect’s his deceased father’s profession and the train which passed behind the brick wall of his home in Northern Greece, adding to the sombre atmosphere of the painting. De Chirico develops similar motifs to Ariadne in The Soothsayer. Influences of the cubist movement can be seen in the rendering of the face of the statue, again of Ariadne, this time waiting for Dionysus. In the 1910s Paris was a fertile place for progressive creatives such as Picasso and Braque. Their flat abstractions left an impression on de Chirico but he chose to follow his own path and continued painting settings with depth and dimension. The perspective of the painting could be said to borrow some elements from cubism with its numerous perspective points. The twisting marble torso may be a reference to Aphrodite, goddess of love. When place next to the hefty bunch of bananas, the scene becomes charged with latent eroticism which contrasts with the references to de Chirico’s childhood such as the train or the ship which is an allusion to the Argonaughts and his home town. This piece seems to communicate the distance of age, and the immediacy of adulthood and the new confusions of sex and the body. One of his most recognisable works currently displayed at MOMA uses a drawing of the god Apollo from a book by archeologist Salomon Reinach. The head and hand both play with the idea of a body which is not inhabited which may come from de Chirico’s reading of Nietzsche and the philosophers ideas on tragedy. In classical times Apollo was god of the sun, beauty, music and poetry however Nietzsche saw him as ruling the world of dreams which makes him an apt figure for the psychological surrealist composition. The front two figures are the ‘Muses’ of tragedy and comedy, Melpomene and Thalia. In the background is placed Apollo (there he is again), the leader of the Muses. For a painting about inspiration, de Chirico actually copied this painting over 20 times to sell to collectors perhaps as revenge against criticised he’d received for his later paintings. Although this painting did inspire poet Sylvia Plath to write a poem of the same name.