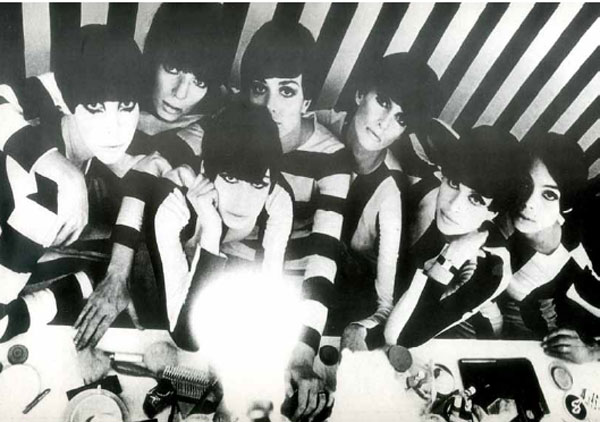 The recent revised edition of William Klein’s photo book ‘Rome’ by Aperture Foundation has brought the work of the multi talented artist into the front-line once more. Shot in Rome in 1956 when Federico Fellini, Pier Paolo Pasolini and Alberto Moravia served as Klein’s guides, ‘Rome’ is a radical visual diary of the Italian capital still marked by Fellini’s acclaim: ‘Rome is a movie and Klein did it’. The new edition is enriched with never-published fashion photos shot in Rome as well as new, original, updated text by the photographer himself.

William Klein, renowned as the artist who re-invented the photographic document, has managed to excel at several more art media like painting, sculpture, film direction as well as graphic design throughout the years. Born in New York in a poor Jewish family he expressed an interest in the Arts from an early age. Klein spent his free time as an adolescent in MoMA which he considered a second home. 1948 finds him in Paris, where he studied under Andre Lhote and Fernard Leger. Leger advised his students to reject conformity and work away from ateliers, in the streets, something that Klein applied in his work ever since. After his marriage to Jeanne Florin, William Klein decided to stay in Paris, which still remains his basis. He originally was interested in painting and sculpture and his work was exhibited in France as well as in Italy at that time. He collaborated with architect Angelo Mangiarotti but it was his meeting with Alexander Liberman, art director of American Vogue, that would introduce him to a field he had no prior knowledge or experience of, that of fashion photography.

William Klein’s photography is characterised of black humour, graphic invention and sociological interest. He has established himself a reputation of antiphotographer due to his excessive use of blur motion, high contrast film and wide angles. As he himself revealed in an interview his intention was to photograph: ‘a marriage like a riot and inversely a demonstration like a family portrait’. His primary project for Vogue was a photographic logbook about New York – entitled ‘Life Is Good & Good for You in New York’ – that earned him the Prix Nadar in 1956. Three more books followed: ‘Rome’ in 1959 and ‘Moscow’ and ‘Tokyo’ five years later. As far as fashion photography is concerned Klein preferred shooting in the streets or on location. He appeared disinterested in clothes and more focused in experimenting with new techniques such as long focus lenses and multiple exposures revealing his ironic yet innovative approach of the fashion world.

His ironic attitude towards fashion is also epitomised in one of his first films ‘Qui êtes vous, Polly Maggoo?’ which satirises the media, celebrities and fashion industry and its excesses. Influenced by Nouvelle Vague and the theatre of the Absurd Klein has created a film that at some points seems to lack structure yet is adorned with spectacular photography and rare surreal film sequences. His interest in film making continues with ‘Mr Freedom’, one of the most anti-American films ever made. ‘Mr. Freedom’ is an anti-imperialistic satire with Delphine Seyrig, Philippe Noiret and Serge Gainsbourg. Its political connotations, in total accordance with general atmosphere in Paris at that time, reflect William Klein’s political awareness. Klein has remained a prolific creator of films and documentaries like ‘Muhammad Ali the Greatest’ (1969), ‘Le couple Temoin’ (1977), ‘The Little Richard Story’ (1980), ‘In and Out of Fashion’ (1998) to name but a few.

Over the last few years retrospectives of Klein’s films have taken place in various metropolitan areas around the world and his work has been exhibited in MoMA, the Pushkin Museum and the Museum of Modern Art de la Ville. Furthermore, he has received the Hasselblad Award, the Agfa – Bayer/ Hugo Erfurt Prize as well as the Medal of the Century by the Royal Photographic Society in London. Today, at the age of 82, William Klein still keeps his studio in Paris and remains an innovative, unconventional, eclectic artist who has introduced new techniques in photography and was never afraid to break rules and experiment with his camera at hand.