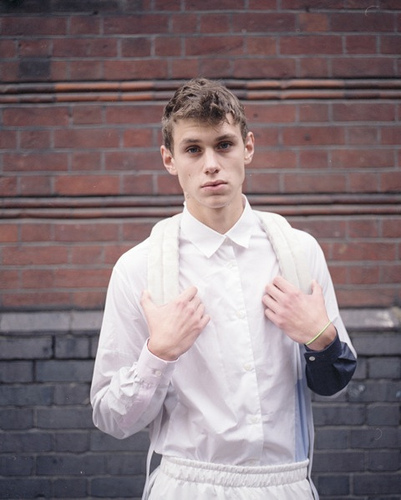 Christopher Shannon is the designer extraordinaire who is talk of London fashion town since he graduated from Central Saint Martins with a collection showing collaborations with Eastpak and Calvin Klein. The menswear designer is influenced a lot by his hometown Liverpool, up north in rough North England where sportswear is part of everyday wardrobe. And with the idea of trackies and hooded jackets in his mind he creates each season attires he calls himself luxe sportswear or refined scallyism. However, his pieces of course have nothing to do with plain track pants or sports pieces. The fabrics are high end, the colour combination and prints each season are breathtaking and so was his spring summer 2011 collection shown at London Fashion Week. Inspired by the holiday he has never taken Shannon takes us on a trip to the Caribbean and Africa. Ozon sat down with the Liverpudlan designer to talk about fashion, London and much more.

-How was the transition from Liverpool to London?

I did it twice, once for my ΒΑ and once for the MΑ. The first time Ι was running away the second time I had to be forced to. After living in London for a while, coming back to the North was really refreshing and reminded me of all the good things, rather than the things I wanted to get away from in the first place. Liverpool is a very specific place and it was good to start accepting and enjoying all the aspects that had shaped me growing up. Liverpool has this heritage for music and sport and also it went from being the second richest city of the empire to one of the poorest. All those things are still there. The mixed communities and faded grandeur, its an amazing place. It’s very well known for style but not so much for fashion design, apart from Ossie Clarke.

-In which ways does London inspire you to evolve your designs?

London is pretty grim in most ways but all my friends are here, they are my sounding boards. We all talk things through with other designers like Mary Katrantzou and Michael van der Ham sharing our mistakes and helping each other. I do get inspired by the street culture but I think wherever you are you look at stuff. The idea of sitting researching in a library all day isn’t for me. My work has to be relevant to the world in someway and not just self indulgence.

-What is in your opinion the unique selling point of London Fashion Week?

I think people look to London in search for something different but that’s double edged. I think too much experimenting makes people distracted. Fashion is about clothes not just about drama. I love extreme design and new ideas but I think there has to be something desirable about the product. That’s what separates fashion from art and theatre.

-Do you feel any affinity to other up and coming London based designers?
Not really from a design perspective but definitely in a goal direction. We are all striving for similar things in different ways and vice versa. London used to be just a place for ideas, which has produced some amazing shows and work, now the pressure is on the city to turn those ideas into businesses which is the tricky part. There are designers I love here but they do mostly womenswear, Christopher Kane and Richard Nicoll I think are both consistently incredible and its great to see them working with companies like Versace and Cerruti. I think similar things will happen for Michael van der Ham and Mary Katrantzou because they have very clear visions.

-You call your clothes re-worked luxe sportswear. Where does this idea of luxurious sportswear come from?
When I was studying for my MA I kept being drawn to this really crude old sportswear pieces, I wanted to do them again but pay more attention to them so they didn’t feel so mass produced. Just by adding a few things and re-working different elements of the design you end up with something that feels really new but also fits within a certain look.

-Do you have a certain man/type of man in mind who should wear Christopher Shannon?
Not really, but when I’m designing, I do question whether anyone would wear it and so I ask friends to try things on, usually together with their own clothes, tο have an idea of how it will work in someone’s wardrobe. Τhere’s nothing worse than designer clothes that scream, I always think they make the wearer look so unsure of themselves. I get asked a lot about celebrities but I have no view on it. I would never sit down and think ‘lets do something that David Beckham would like’, it would never occur to me and if it started to creep in I’d probably quit designing. I think the person who buys my clothes knows what they are about and that’s more important than a brand.

-How important is creative collaboration for you?

It is the most important factor, everything in the studio is done through team work. That’s either with my assistants or my pattern cutter or whoever. Also working with companies like Eastpak really adds to the whole process and informs what we are doing. I’d hate to be tucked away being all pretentious and secretive.

-What were the main influences to your s/s 11 collection?

I think just longing to be away from the studio! When you are working so much you crave seeing things that make you feel like you are on the move. We brought in a variety of things this season and after a while it just starts to fit together. You have to trust that it will happen but waiting can be scary. There is an abundance of new references, completely new colours unfamiliar to us and we also decided not to listen to the same music. I got really into burning Black Coconut incense which I like to think got us in some kind of mood! It was my rebellion against the endless scented candles people have started filling their voids with.

-Prints seem to be very crucial in every Shannon collection. Can you tell us how the prints for s/s 11 came about?

My background is as much print based as it is menswear, it gets really tiring looking for fabrics you love so to me it seems more logical to create your own. The print usually is something we want to rub up against the cleaner pieces in the collection and create some sort of graphic dynamic. I like to work with classic elements and I’d never attempted a camouflage before, we worked into it making it more graphic with text but also adding really classic floral bits, you really have to see it close up to see what going on. 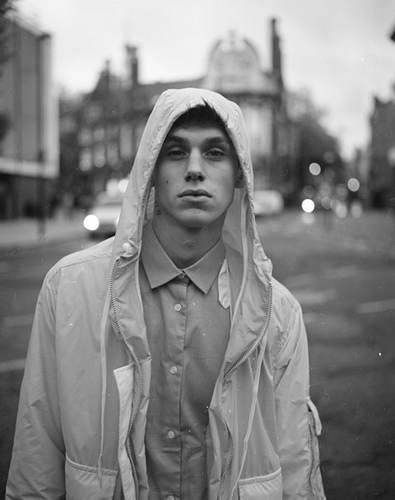