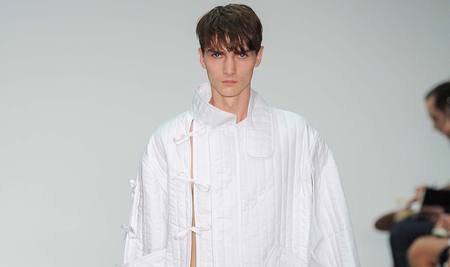 “I feel like every season is a reaction to the one before, so this season we wanted it to be freer and we wanted it to feel beautiful, in a way”. And Craig Green fulfilled both of his ambitions thanks to his Spring/Summer 2015 collection. On the one hand, one-coloured garments in white, black and multiple blue tones, object to the prints and heavier forms of the previous collection -besides, it was a Fall/Winter collection-, and on the other hand, the barefoot models conveying an ambience of tranquility and self-sufficiency to the audience, which welcomed the London-based designer’s work with dithyramvic comments. Undoubtedly, all these had nothing to do with the impact the counterpart collection one year ago, on “trashy” newspapers and the term used, “Vivienne Waste-wood”.

He did not move far from his past cosmically dramatic atmosphere, he introduced though a ZEN element to his clothes this time. The silhouettes followed two norms: loose shirts and jersey wraps with obvious cut-outs. The shapes subconsciously bring to mind samurais, warriors, heroes who have jumped out from some story.

He is trying to change the given perception of garments, and he is doing so by working on them poetically, resembling Rei Kawakubo -only in terms of intentions. The drama is transferred to the garment’s movement, since it attains some melancholy and vulnerability, it becomes mysterious. Moreover the soundtrack music (Wim Mertens’ “Struggle for Pleasure” and Enya’s “Caribbean Blue”) accents this atmosphere of “silent protest”. The banners worn by models did not want to send you some sort of message, but to let yourself in what he is preparing, that is not aiming to someone more specifically, but plans to create a different audience, that wants to travel to his own world.

Green has graduated from the Central Saint Martins, under the guidance of Louise Wilson, who passed away a month ago. For those to have watched the show, it was intensely moving, bearing in mind her attribution to this collection. The ambience would have been certainly different, if the result was different. Because Green wasn’t afraid neither to explore beauty by his own terms, nor to act more spiritually, when it came to his expression. He created intense emotions, paving the ground for what will follow.