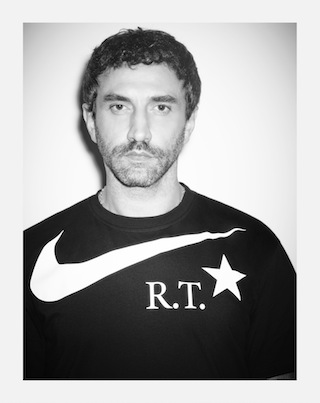 2013 was an extremely successful year for Riccardo Tisci–winning a CFDA International Award, the Met Gala, and designing costumes for the Opera Garnier. Tisci has collaborated with Nike and the upcoming collection will be named NIKE RT, coming out this Spring. “For me, Nike represents a lot: my childhood, America,” Tisci said. “In Europe, America is the flag, McDonald’s, Marlboro, and Nike, for a kid it’s very important.”  Ian Ginoza, Nike’s Global Footwear Director, said: “We were impressed by his vision, I personally wear some of the t-shirts; that’s something that Riccardo does well, blurring the lines with street fashion.”

The only thing we can for-tell is that we will see some major footwear that according to Tisci will be strong without being loud.