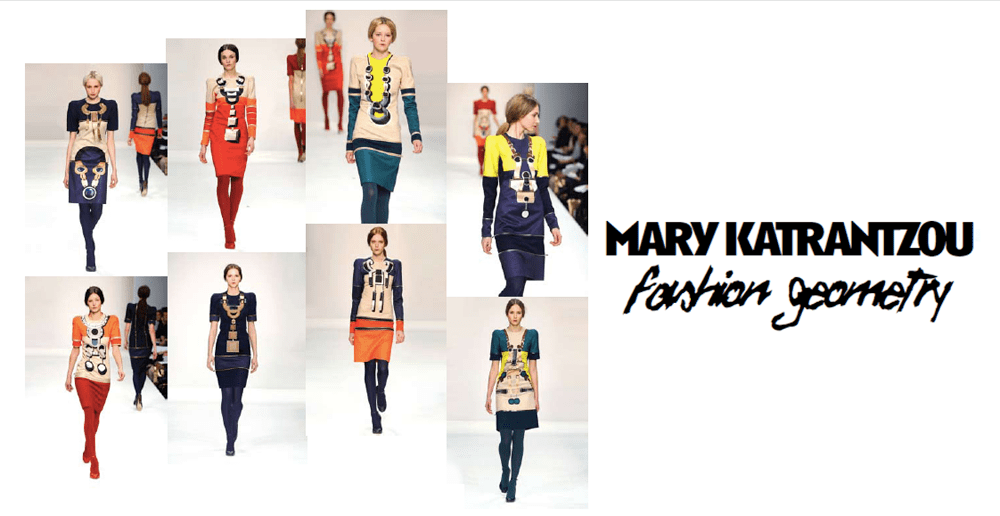 THE GEOMETRICAL SHAPES, VIVID COLOURS AND THE BULKY JEWELRY THAT ACCOMPANY HER DESIGNS WERE ENOUGH TO IMPRESS THE TOUGHEST OF ENGLISH JUDGES. MARY KATRATZOU IS A  GRADUATE FROM CENTRAL SAINT MARTIN’S COLLEGE AND SHE IS A DEFINITE CONTENDER FOR THE TITLE OF FASHION’S NEWST RISING STAR.

How have your expectations changed after your promising introduction into the fashion world? I am lucky to have been approached by important people in the field who were willing to help me out; after the release of my AW 08 collection my label was only a natural progression. It is very different when you get people that believe in you and who are willing to put time aside to help you out, than to just fight on your own. I want to sustain the initial interest in my work, thus my next collection will be similar in style, but more complete.

What are your influences? What’s the importance of symmetry in your designs? I’m rarely influenced by particular things; it’s usually a combination of things. This collection is inspired by the 70s and the plasticity of Michael English’s posters. I wanted to create trompe l’oeil prints of jewelry that couldn’t possibly be worn as real because of their weight. This gave me the idea to design real jewelry made out of bronze and wood that would replicate the prints. My designs could be called symmetrical because the photographic aesthetics of my prints refer to the female body and its proportions.

London, New York, Paris or Milan? Which city defines the course of fashion, in your opinion? Each city has its own dynamic, which comes across through their fashion production. In Milan designers focus mainly on quality and detail, in New York it’s more about minimal lines, whereas in Paris the catwalk tends to be rather theatrical. In London new ideas seem to be pushed constantly, that’s the reason I think it qualifies as the ideal city for a new designer. I would generally say that fashion isn’t so much about cities as it is about designers who have the power to create new trends and know what women want today.

What would you say currently describes best “haute couture” and “street fashion”? Is there common ground between the two? Many designers find inspiration in street style, because it relates to choices made by social groups that have their finger on the pulse of the times. However, I believe that haute couture is influenced more by thestreet styles of previous decades because they can be easier to absorb. Street style dominates the ready to wear catwalks, where the “Balkanization” of fashion is a strong common element, in a positive sense. There is more freedom on the catwalks and trends aren’t as restrictive as they used to be. Peopleseem to be more experimental regarding style and as a result street styles have become more personal.

What’s the importance of the city in which a new designer resides? Depending on where you live you feel that, as a new designer, you are part of all that’s happening. I’ve mainly lived in London and feel that through my work I filter the city’s energy. I think my clothes combine the energy of designers living in London with some classic Greek references.

Who do you consider to be the best representatives of Greek fashion? Sofia Kokosalaki, Giannis Tseklenis, Giannis Eleftheriadis and Mi-ro.

Would you go as far as stating that fashion icons are dead? Jackie Kennedy, Jane Birkin and Twiggy were all icons because of their lives and the myths that surrounded them. Fashion icons still exist but the term does not have the same significance, as it tends to describe fashion conscious women of a strong presence.

What’s been the most important moment in your career so far? Would it be working with Sofia Kokosalaki or selling your designs to Bill Blass’ legendary fashion house? I learned a lot from both; maybe working with Sofia was more important though, as I got to witness first hand the way that she creates a collection, from its inception through to its final presentation at the Paris fashion week.

What are your future plans? A full course; I want to be able to present my work on schedule at the London fashion week and to establish my personal design style. I also hope that there will continue to be people that want to wear my clothes