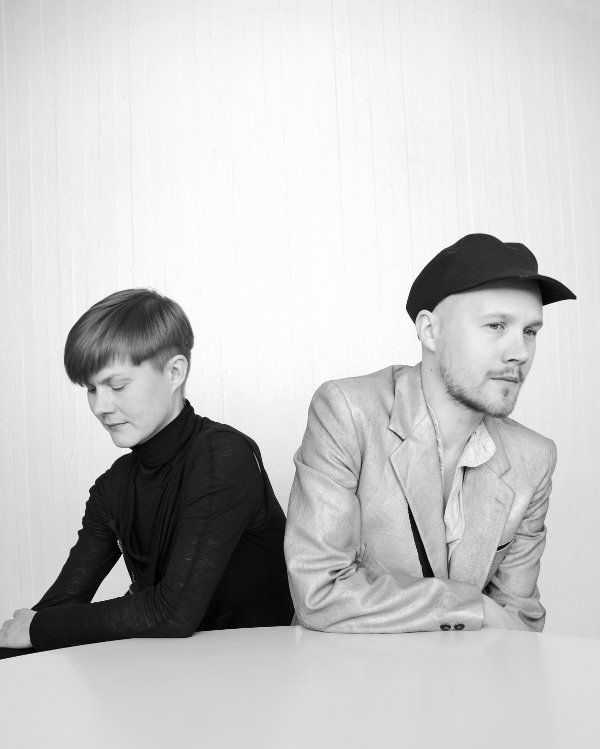 Tuomas and Anna Laitinen let their work speak for them.They come from Finland – they are actually based in Helsinky, they rose to fame after receiving special mention at the 2006 Festival d’HyÈres, and they have since shown both in Milan (2009) and Paris (2010) followed by critical acclaim.When it comes to sibling designer duo Laitinen, that’s about as much background information as you will get. Slightly thrown off by the information overflow that’s shaped today’s world, its components, Tuomas and Anna Laitinen, have made sure that they let the clothes they make, speak for themselves (look at their website – it’s practically mute!)Which they do, considering that the Laitinen name keeps popping up in the fashion editorials of prominent magazines all over the world. Still we wanted a little more… So, we got them to speak.

-What inspired your latest collection?

We wanted to bring some ethnic touches to our usual youth culture references. We watched old Hanif Kureishi films like My Beautiful Laundrette, London Kills Me and Buddha of Suburbia. All of them are set in suburban London of the late 80s and early 90s and their characters wear a rather eclectic look of traditional Indian, Peruvian and Pakistani clothes mixed with punk, new wave and even skinhead styles.

-You used to also do womenswear. Why did you switch solely to menswear?

A small company has to choose one or another to grow the product range and collection in general. We had some big menswear clients asking more and more things to buy, so it made more sense to concentrate on menswear. I’ve also been trained as a menswear designer, so it comes more naturally from me. Also our menswear is quite androgynous and there are still a lot of girls wearing it.

-Is an androgynous look more convenient to the times we live in? What do you think it expresses in relation to today’s social and financial standards?

The androgynous look basically comes from our personal styles. When it comes to our own wardrobes we don’t really like anything extremely feminine or masculine. For us androgyny means freedom and modernity, that you’re free from the typical views of what’s suitable for a man or a woman. We simply don’t like when things are labeled or put into boxes. At the same time we love all the super feminine designers like Alaïa on other people and there should always be a freedom to choose, no matter what the financial or political situation is.

-What got you into fashion, in the first place?

We grew up in an environment where we were exposed to many creative things like art, music, cinema and fashion and our parents never tried to force us to choose a conventional career. We were and are obsessed by images, so fashion magazines were very appealing with all their striking visuals. For us getting the latest issue of The Face or i-D was like the second coming of Christ! It was the early 90s with the Japanese and Belgian designers, Jean-Paul Gaultier, Helmut Lang and the grunge movement with photographers like Corinne Day and David Sims. We found that world so fascinating and wanted to be a part of that.

-Your clothes have strong references to Japanese designers like Rei Kawakubo, however, in terms of mood, they bring out an intensely European/Nordic feel. How much do our surroundings affect the creative process?

I think fashion really hasn’t have nationality anymore, our generation has had pretty much the same information and references in any part of the western world. Of course the Japanese were and still are our heroes, but the dark mood definitely comes from the kind of music we were listening to when we were growing up, which was pretty melancholic. But those same bands and the photographers and designers I mentioned previously, are referenced by many young English, Belgian and German designers as well. Of course there are still cultural differences, so we would probably approach the same topic in a more minimalistic and austere manner than let’s say someone from Italy.

-What was your relationship like growing up and how did you decide to work together?

We’ve had the typical sister-brother fights of course. We grew closer in our teens, because we were both outcasts and liked the same kind of music, art and fashion. Let’s say we made our best effort in being overtly pretentious artsy kids. We’re very similar in many ways and our tastes are alike, so working together comes very naturally. Our 1st project together was the collection for Festival Hyeres in 2006. I asked Anna to do some hand-knitted sweaters and that’s how it all started.

-A static website, an extremely laconic blog and very few interviews. Many would argue that to succeed in fashion you have to build on your image and your connections. What is your take on that?

We think that in today’s world there’s too much information coming from every direction and hardly any of it is even worth browsing. We may sound snobbish, but we miss the exclusive club-like feeling of fashion magazines and the thrill of finding something new. In the 90s you really had to work hard to find any information on fashion or music. It was kind of a rite of passage to finally find the cool magazines, clothes and clubs. Nowadays it’s made a bit too easy and things are less genuine too. So we like to keep a bit of mystery alive with our communication and brand image.

-What would be your favourite city to show your collection?

Paris. We love it and hate it at the same time, but that’s where the buyers and press are. There’s not really an option when you’re a small menswear label. London is a fun place to show, but there’s no commercial viability and the cruel fact is that you have to sell something to keep on going.

-One collaboration you look back at with delight?

We always enjoy designing our prints with photographer Chris Vidal and he also shoots our lookbooks, which are a big part of our image. Also of course we’re very grateful for all the great fabric companies, who have agreed to work with us. We’re not the easiest and definitely not the richest customers.

-One thing you really wish for?

An investor with a passion for niche-market menswear labels.