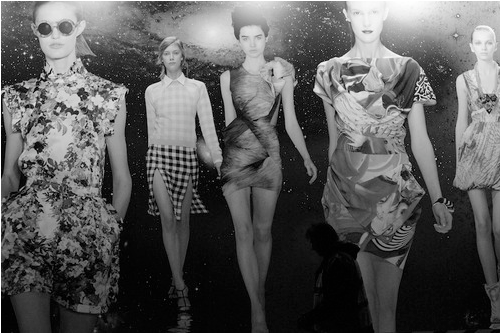 Fashion week here we go! At Charlie le Mindu. Space make-up and costume-like creations made from real human hair. Something that Lady Gaga would wear. First show at “My Beautiful Fashion” space. We are going to be spending lots of time here we think.The Aminaka Wilmont collection is called ‘Strife’. The Feathers were a nice touch. David Koma at Vauxhall fashion Scout. Huge queue to see one of the most promising young designers. Black leather jackets, geometrical patterns(angles, angles, angles!) and women in power! Spider Queens and Spider Princesses. Bora Aksu A/W 10 collection proved that beauty can be dark. Web patterns and ripped leggings. The invitation was a beautiful sketchbook that we are going to keep on us for the rest of the week. Everything was oversized for Jena.Theo collection. These kids love extra fabric!High-waisted trousers, wool jackets and floating drapes. Clothes that you can experiment with. They may miss a trouser leg or add an extra ending to a sleeve and the result is weird and lovely. Check our interview with the duo at OZON’s London Panic Issue. Meow. Cat Woman and Grace Jones hooked up at the Hannah Marshall’s AW’10 ‘Army of Me’ Collection but why can’t we help but feel like we already attended this party? Velvet and leather, glitz shoulders, full-length jumpsuits and Saturn rings orbiting around a re-scaled silhouette, a midnight vixen we can all recognize. Great extended weapon-like rings though.

Medieval, Gothic, Punk , Elegant. Total black in a boudoir setting Romina’s Karamanea designs were a total antithesis to her SS10 collection. The bold garments captivated the imagination of a packed crowd. If only there was more space, because sometimes a big crowd – which is good for the designer – can be quite bad for the crowd itself. Mark Fast. Overweight models, underweight models, tall models, short models. That was Mark’s way of differentiating his designs. Otherwise I am not sure I can remember which ones are SS and which ones are AW. So this one we really liked! Mary Katrantzou’s encounter with the 18th century was pure serendipity. The models were transformed to a walking canvas where Mary explored her colourful prints. Trompe l’oeil details, oversized necklaces and Louboutin shoes. That’s what we call real elegance. J.Maskrey was not your typical fashion show. ‘In the mood for love’ as a soundtrack, models walking in a lethargic way, posing and staring you at the eyes. Hedonism and black tattoos made of crystals. She could have avoided the snakes, spider-webs and black roses… Well forget Tavi and her Dior bow if you were sitting behind the inflatable Queen herself Pandemonia you wouldn’t be able to see jack at the Iris Van Herpen’s AW10 show. Appropriately titled ‘Synesthesia’, Van Herpen sent out a collection of sirens enhanced in fragile metallic looped-leather that tricked the eye in thinking that the sound waves from the music were vibrating off the models shoulders and hips. Stunning! ‘You can do it put your back into it!’; cool East Londonite Henry Holland and his posse of friends (the Geldof’s and Chung’s) got us bipping and bopping in our seats at his AW10 show. No surprise as to what the motif/gimmick would be this season after we received our paisley bandana scarf invites. Bandaged and elasticated silhouettes, sheep-skin strip patching and swinging side ponytails in House of Holland characteristic bubble-gum pink, lilac and aquas. Ann-Sofie Back is ‘back’ with a vengeance after her absence last season with a fall collection ‘inspired by online game phenomenon in which people take on electronic alter egos, avatars’. I don’t know about digital personification but the slick-haired Gothic Lolitas in flowing tulle with six-pack detailing and some compelling webbed pieces of suede threaded into dress and body-suit complete with wings left us disturbed and intrigued. Maybe it was just the end of a long day or maybe it was just that PPQ’s collection ‘Fantasia’ for AW10 was just that predictable and forgettable. Dark velvets, gold lame, opulent brocade fringing; nothing really ‘fantasia’ about it.

Off to the shows. Coat, scarf, umbrella check. After two days of sunshine London is rainy and cold again. Invitations in the bag for the big shows today: Vivienne Westwood, Louise Goldin and CSM MA Show. The hunter meets the huntee at the Todd Lynn fall 2010 show with immaculate tailoring in dove grey’s and browns and lush fox furs complete with tail accentuating the dynamic mix of braided leather and mohair outerwear. We nod in approval. Haunting violent music. Futuristic soldiers in short dresses. Prominent shoulders, fur and leather details. My guns, my backup and my spaceship! Louise Goldin(*) did it again. (*)winner of this year’s Fashion Forward award. PS. The new choice for the TopShop space is not getting any more convenient and we have ended up longing for the old venue… Mixed patterns, layers over layers and a palette that adored red, pink and leopard. All that wasn’t enough for the duo who decided to add a touch of folklore by in the form of crowns made of paper (created by Nasir Mazar) and veils covering the models’ faces. It was like seeing Balkan style brides on LSD. If you ever had the dream of becoming a princess, Meadham Kirchhoff just killed it. Vivienne Westwood AW10 Red Label presented a successful mix and match of styles, cuts and colours.  The Royal Courts of Justice was the ideal scenery for Westwood show with its high ceilings, its majestic chandeliers and a clock with no pointers on. Women with messed up hair and hard faces ‘grown up in the country’, city girls with sparkling disco dresses and of course the tough type who was brandishing a pair of knives while storming down the catwalk. The dame of British Fashion filled the show with hints and hidden messages about the climate change. After her show in Paris her intention is to work on a television series in order to raise environmental awareness. The future looks beige and a little bit shapeless according to the CSM clan. The graduates of the prestigious art college seemed to have a quite similar approach on next season’s look. Soft colours, geometric cuts and long hemlines from the 22 ‘chosen ones’ who decided to cover the body and stay away from any extravaganza. Jackie JS Lee and Lilly Heine shared the Harrods design award, with ‘all black’ and ‘all architecture’ collections respectively while Rok Hwang won the L’Oreal Professionnel creative award with his full of stars creations

Does leather and lace go with floral? The answer at Christopher Kane AW10 show was a big yes. All black on the back, full of flowers on the front, Kane managed to create a collection for the contemporary woman. When you can’t decide whether you are tough and strong or you are the folklore type Christopher Kane’s clothes allow you to free yourself and be both and that for us is a man with a vision. At the first show for Marios Schwab’s brand named line after his appointment as Halston’s creative director we watched a classic well tailored collection. Inspired by his days as ‘the only boy at fashion school’ Schwab delivered a collection that nodded back to his roots. Nostalgia pumped up by a bit with austrian folklore. Ioannis Dimitrousis presentation did away with the limelights. Elaborate knitwear, revealing and sexually provoking as always, his new collection is truly revealed in the dark when the threads of the dresses start to glow. At the end of the night we were at Machine-A’s party where the collections of up and coming designers Asger Juel Larsen, Gabriella Marina Gonzalez and Gemma Slack were presented.

In their usual style Basso and Brooke AW10 collection focused on their signature digital prints. A bit toned down this time, exploring darker autumn tones . We liked the camel coats but on the whole we preferred the last collection and its colour explosion. The most important show that the London Fashion Week held and the one Anna Wintour watched was probably the Burberry one. With a collection that stood out on every level, Burberry threateningly flirted with the aviator style, with the most divine leather jackets we have ever seen. Ada Zanditon’s and her ‘Echolocation’ collection  presented strongly wearable from day to evening, feminine and glamorous pieces. Ada borrowed the colour palette of a nocturnal winter sky. Using sustainable fabrics and yarns and her own environmental-friendly digital prints, her show made an ethical fashion statement. Extra props for the organic pomegranate cupcakes and juice give away.

London Fashion Week Number 26 is over. From Alexandra, Viviana, Oliver, Nikolas and Danai a fond farewell! We’ll meet again on the pages of the magazine!