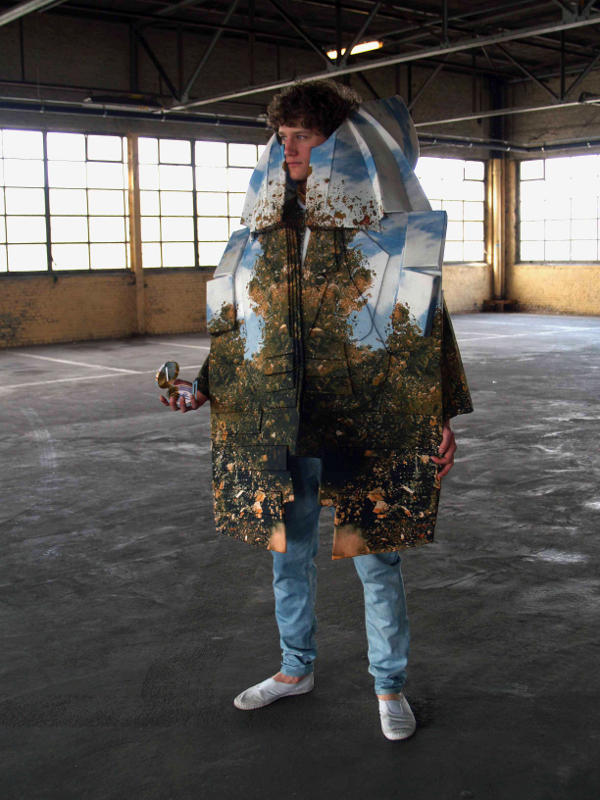 Michael Kampe is an aspiring menswear designer who apart from coming up with impressive fabric treatment techniques, knows well how to deal with 3D explosions. Following his graduation from the prestigious Antwerp Royal Academy of Fine Arts fashion school, his ‘Exploded View’ collection won the Trieste ITS#9 Diesel Award together with attracting the attention of Diesel’s Ronzo Rosso and Viktor&Rolf.

The idea behind Michael Kampe’s creations is a constant deconstruction and reconstruction; by deconstructing existing pieces in their compositional elements (textile, shape, color) he creates new ones. The fact that Michael Kampe is into menswear, is not coincidental. ‘My goal is to create a different point of view on clothes and the way they are composed. Especially in menswear there are so many rules that I respect but at the same time I want to innovate, to open people’s eyes to new alternatives in fashion, hopefully make them question their persistence with standards’. Michael, unlike most young designers whose dream has always been the fashion world, had nothing planned. His path so far, has followed an organic step-by-step process without strategies, a bit like his designs. He started sketching ideas without previous fashion knowledge and translated them into clothes. In the beginning, architects and artists likes Lebbeus Woods, Florian Baudrexel, E.V. Day and Lucy McRae provided him with inspiration, following gallery-trips in Berlin. ‘When I felt that my 2D ideas could become alive in 3D I knew that that was what I wanted to do. After that point I just couldn’t stop’. So, Berlin was followed by Antwerp. ‘Before Antwerp I was not really interested in fashion nor had I any previous design lessons and was totally unaware of what to expect. Only after I realised how professional the other students were, working with assistants and super expensive materials, I decided to push myself even harder, teach myself sewing and pattern-making without books or teachers, just by reading clothes and experimenting with fabric-treatments’. Michael’s experimentation, though, never ends up in an impossible to wear costume. One thing he does well, is mixing artistic-experimental pieces with everyday wear references. These references have to be visible, but not too easily identified. This is what Kampe is best at and what got him the ITS#3 Award together with an internship at Diesel. While most of his colleagues at the Royal Academy of Fine Arts would run away screaming renouncing denim as something too normal and boring, Michael found the best possible material to do exactly what he does best: turn something casual into avant-garde. Now, from his position at Diesel he maintains that creative freedom ready to insert at his later own KAMPE collection.