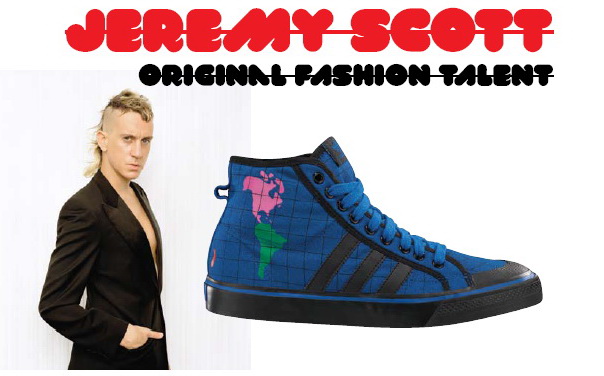 Adidas Originals by Originals stands for a very special cooperation with truly “original” partners who share the same values of the brand and present them in their very own way to an international lifestyle audience. One of those partners is fashion designer Jeremy Scott known for his leopard track suits, winged shoes, sporty tuxedos; we met him in Paris during the unveiling of adidas. Originals by Originals forthcoming collection. Ozon have secured exclusive pictures of what everyone will be wearing next winter!

Let’s begin with Paris, what do you enjoy most when being in the French capital? I have a history here, there is a lot of familiarity for me just being in the city the way it moves, and the way it sounds. It makes me happy to speak French, to work with French people and organize my shows here.

So there must be a contrast between Paris and LA where you are originally based.T

here is even a bigger contrast between L.A and New York and there is a big contrast between Paris and L.A. It is not just the sun, people in LA are more laid back. Paris is more like New York, a super speedway of acting.

Let’s come to the adidas collaboration. What was the initial brief they gave you? The initial brief was “sky is the limit”, “do whatever you imagine” there was complete freedom. As we have been working together with adidas creating special projects for several years, we know each other well. I already knew the brand well, respected it and knew how I could find ways to add new elements to it. People from adidas felt this security with me. Creating new ideas was the main goal.

Were there any difficult points in this collaboration?

Just the timelines. I had to work a year in advance for adidas. So it is a much different process for me. I had to create a collection that would sustain for a year. That was a challenge. For my collection I am more of a last minute person, I can change things even at the last minute.

No nagging from adidas for a certain design maybe?

I never feared that, not really. There is lots of love from all the people I met throughout this five-year relationship with adidas. From Longchamp to adidas, you have been collaborating with several brands.

Have you ever taken any risks or compromised?

No, because I never compromise.

How difficult was it for you, as a designer with your own style, to present something new and original for adidas? adidas claims that originality is the main goal.

That is not very hard for me, actually (laughs). From the winged shoes to these track pants that I am wearing now, it is all about originality, part of me as an artist. African safari is the main theme in the collection we see today. I always loved Africa, National Geographic and hip-hop music. This mix has inspired me a lot, African themes were never involved before in my own creations.

Do you consider yourself and your collection bold or shy?

As a designer I am bold, but as a person I am shy. I find this contradiction very interesting. The world is built upon contradictions, magnetic poles, backs and forths.

What are the most original and inspiring elements of post-modern life for you? That’s a difficult one! I have not known any other world than the post modern one. I still find amazing people like Andy Warhol, Madonna and others that presented us groundbreaking ideas. I am still like a farm boy, amazed by the fact that I jump in an airplane and in a few hours I am in New York or that wherever in the world I can communicate through my Blackberry. I have no idea how it all works but it is all very inspirational to me, it is our contemporary life style itself that gives me new ideas.

How about Mickey? He was the star of your catwalk in Paris during the fashion week.

I love Mickey. With the hard times that we are in right now I thought that during the big depression in America in the 30s Mickey came out and represented an optimistic version of life. Moreover, I thought about him next to Minnie, a never-ending love story. And I thought that people today need optimism and love. So I based the collection on them, lots of vivid colors and cartoon shapes. A very optimistic way of seeing life today.