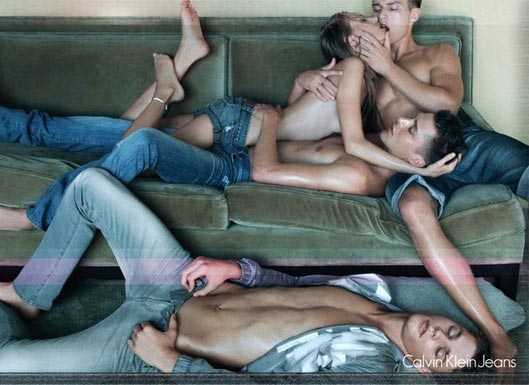 An overview of the most provocative denim campaigns of the past, takes us face to face with teenage girls discovering their immature sexuality, a Last Supper in full female quorum and of course the end of the world. There is no reason to worry. Let us blame the jeans.

From the most characteristic example of the the full-length jeans, the timeless workers’ uniform, denim is transformed into a symbol of independence. Turned-back revers, leather jackets and young boys with powerful motorcycles and delinquency trends. Jeans are associated with youth culture, torn, overworn, with stains reminding us of the last time we did something stupid without a care. Jeans are like a fetish of freedom and they will always be the fabric that was banned in American schools in 1950 under the fear of converting the unsuspecting average American teenager to a ‘rebel without a cause’.

And jean is the fabric responsible for inspiring a number of the most provocative advertising campaigns. In 1981, a fifteen year-old Brooke Shields poses for Calvin Klein and declares her innocence. ‘Nothing gets between me and my Calvins.’, is what Shields is saying and shocks the American public opinion, a very sensitive opinion to anything that has to do with the sexuality of young people. Such ‘rudeness’ was presented by Lee in 2006 to introduce ‘Lolita’ in Australia. Terry Richardson photographs a young girl in obscene poses. The lollipop which she holds, causes offence to Australian organizations, among which the Australian Childhood Foundation, and the images are characterised pornographic. In spite of all reactions the ad is deemed legitimate, since the protagonist is over eighteen and so the image goes to featuring in enormous billboards. During the same year a Diesel advertisement appears, depicting a naked man being tightly wrapped by three pairs of female legs. The image is removed on the grounds of too
direct sexual suggestions. It is also accused of racism since the man’s back is of very dark colour compared to the female legs composing the ‘wrap’.

Τhe 2005 campaign ‘The Last Supper’ by Marithe & Francois Girbaud, was considered inappropriate because it introduced an alternative version to the work by Leonardo DaVinci. In Girbaud’s version, the apostles are replaced by women, and the one man who appears to the right of the central female figure is only wearing a pair of jeans. The ‘blasphemous’ ad is banned in France and Italy. In the following year, Miss Sixty and Mario Testino offend with an image of a woman in white jeans and a colorful butterfly covering her bottom while she is sexually attacking a half-naked man.

In 2007 environmental awareness is high and everyone is concerned about the future of the planet while Diesel ‘Climate Change’ campaign with Terry Richardson, gives a new perspective on global warming; ice melts, more
beaches are coming! In a world where environmental destruction has hit hard and the presidential busts of Mount Rushmore are almost covered in water, in a newly created ‘beach’ a couple covers each other in sunscreen. Even at the end of the world one can have style, an athletic body and a perfect hairstyle. However Lee in 2008 aspires to ‘make history’ and not to dismantle the world. Avoiding the massively expensive productions and famous photographers, the ‘Make History’ campaign invites young photographers to take control by sending their most provocative images.

Following the circular path of fashion we return to Calvin Klein and the 2009 campaign. Steven Meisel photographs a love quartet between a girl and three boys wearing just their jeans. The TV spot is banned and the sweaty atmosphere of the models is enlarged to billboard size in New York creating panic. Once again the female protagonist looks far too young.

Some speak of a triumph of fashion against political correctness and taboos in the sense that subjects which normally scare are put out in an open dialogue. If you believe that an advertising campaign can become a platform for contradiction then surely the ads for jeans are ideal. If you simply choose to look at a campaign for just what it is, it also seems like a good idea to be ‘educated’ by unpredictable images. Compared with advertising hesitant to challenge the accepted concepts of morality, the advertising campaigns that dare to affect sensitive issues such as religious faith, ecological awareness and sexuality with humor, sarcasm and exaggeration, are funnier and more appealing to us. Fashion is free to add anything in the advertisement blender and we are free to have confidence in our views and not the ones of a ‘big brother’. In any case, if anything goes wrong, the ‘motorcycle boys n girls’ will always be there wearing blue jeans and white T-shirts, ready to get into the next big fight.