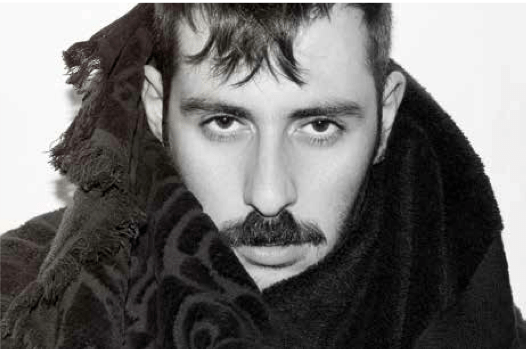 Brought up in Chania, on the island of Crete and now fully settled in Athens, Theodore Leventakis is surely an exception to the rule, when it comes to defining the modern Greek. An individual with highly non-conforming ideas, the 24 year old fashion designer has already built a base, upon which to build his very own aesthetic structure. Since graduating from the AKTO college with a Bachelor in fashion design from Middlesex University in 2010, his unique talent has stood out, having worked with well-established Greek designers, such as Aggelos Frentzos and Giorgos Eleftheriadis.

You’re a menswear designer with a very personal sense of style. How did you decide to get involved with fashion design?

I didn’t really decide anything. I started with the School of Fine Arts, found myself at a fashion school at some point and finally decided to follow that which gave my expression its substance. It was a one way street. You don’t choose it; you just follow the path that has been set for you.

If you could, what would you change about Greek fashion?

That’s a hard task. Nearly everything. What bothers me most though, is the masks that people wear a lot of the time. Today, I’m wearing my happy mask. Tomorrow it might be one that makes me a snob. It’s important to just be yourself, something that remains constant over time.

What do you find ugly in someone’s dress sense?

Bad shoes. Shoes are the most important part of someone’s style. It has the ability to elevate or completely destroy an ensemble.

What would you say to those, who during these tough times, find concerning oneself with fashion to be pointless?

That that is also a fad and it too, will pass…

Where do you imagine yourself in ten years?

It’s not something I think about. I focus on the present and try to evolve over time. That’s my goal. If I had to dream up an ideal situation, then that would be somewhere in Paris.