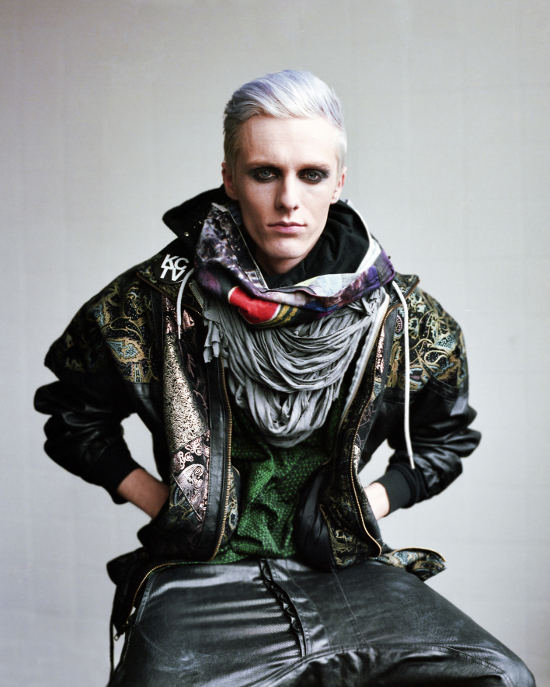 Jacopo J. Moschin is an up and coming photographer who has widely worked in fashion with the world’s best labels and designers such as Valentino and Louis Vuitton and style magazines like Metal (Spain), War (UK), and SangBleu (switzerland). his work explores images of contemporary masculinity, WHILE FOR HIS ‘EAST LONDON BOYS’ PROJECT HE PORTRAYS artists, fashion students, designers and all kinds of crowds from Hackney, Brick Lane and Shoreditch for what they are; beautiful, dreamy, gentle and sometimes eerie. They are all boys who defy dominant concepts of masculinity, bound to their narcissism, untouchably fragile, ‘Angel-headed.

-What is it about East London Boys that fascinates you?

When, some time ago, I first started out the project, it was the entire zone that was fascinating me. London is always changing and the East has become a nest for creativity, fashion, design, art and photography. As a result a lot of young people have been moving there and they represent a certain young society that belongs to London only. Apart from the social side I was interested in portraying them with as much simplicity as possible, like the sons of a modern, elegant and ethereal beauty, which is unique of London but can also recall the works of Hedi Slimane or Gareth Pugh.

-What was different in the process of shooting for this project to fashion shootings?

Fashion shootings, even the most simple and honest ones, are kind of fake as they are always well-planned beforehand. This is the beauty of fashion shootings; building ideals and aesthetics together with a team. Although in this case it might seem planned because the fashion clothes those guys are wearing are absolutely amazing and they were for real, it was all their personal decision. Apart from this, I had to get away from the documantary point of view, as I was more interested in their intimate and fragile beauty than in their social relevance as a fashion trend. I don’t do street fashion. This is a voyage inside their world that goes through their eyes and hopefully catches a glimpse of a secret beauty.

-How do you interpret this particular shade of masculinity? Do you think it is more about the aesthetics or the culture?

I do not pretend to interpret their masculinity or their cultural way of living. I just wanted to portray them for what they are and I am very grateful of their openness towards my camera. I might say that their aesthetics is a mixture of modern fashion and old vintage but there’s something more than just fashion. Their masculinity is very subtle; they are gentle, dreamy, honest, cutting-edge and somehow religious and pure.

-Apart from the gender agenda openly addressed in this work of yours, there is an undercurrent of race politics. Isn’t this striking paleness-whiteness οpposed to the racial and class consistency of East London?

Well this is a very wide field to discuss about: race politics. London is well known for its incredible cultural mix, it’s a crossway of so many different countries and languages that is very hard for me to understand how it works. I think it’s because the city there pushes human values instead of old principles. I am not sure why East London has become what has become lately. Cities are always changing. And the people move according to this. As Brick Lane was once a second Bangladesh, now it is Bangladesh mixed with vintage shops, pale creatures, fashion students, designers and art galleries. How does it happen? I have no idea. But it’s worth to think about it. However there is no social and racial meaning behind my work, they are just portraits and they show exactly what you see.

-As an Italian artist, could this all be your personal Renaissance preoccupation with paleness? Your models could be Tiziano’s angeli.

This is a great compliment to hear, thank you. I think those portraits could be considered quite pictorial -and that is why I was approached by an art gallery I guess. Firstly because of the subjects and the lighting and secondly because I decided to shoot the entire amount of work on film and not on digital. That was a hard decision, economically speaking, but now that I’ve sold some prints, I can say I am proud of that decision. Being an Italian artist I am of course aware of our cultural heritage but I think that since it’s so wide -well, enormous- we could just find links with almost anything. I like your comparison because there is a modern religious aspect undergoing the whole project but I would be exaggerating telling you it was my personal Renaissance preoccupation with paleness, although there is a little truth behind it.

-Is paleness evoking emotion? Is it addressing or subverting Christian iconography by expressing firm adherence to the concept of the androgynous ideal?
Paleness can evoke emotions as much as tanned skin can. I did not intend to address Christian iconography because of some androgynous ideal or value. I discovered the link with this iconography only some time after the shooting when I was watching the films and I thought it could definitely recall it but absolutely only from an aesthetic point of view. It has nothing to do with Christian values and meanings, and it does not contain a second message. However, if you look deeply into the pictures they might have a sort of ‘angelical’, young and pure beauty.