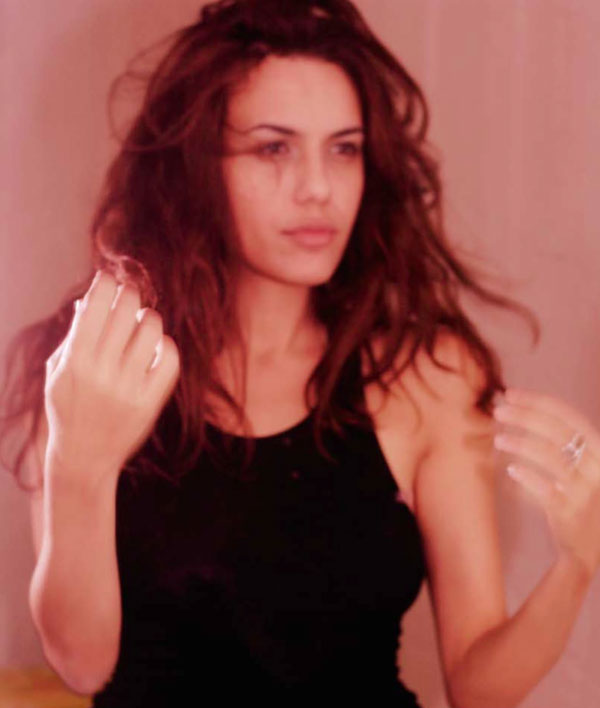 Marina Tsigonaki is something of a kaleidoscopic character, she’s one of this city’s most charming Rock N’Roll personas, a re-nownwed DJ and also an excellent drummer.

-You were recently part of a very interesting collaboration, is this correct?

I have just finished shooting a music video which will appear on MTV Europe for a track entitled “Rose Garden in Hell”, directed by Achilleas Gatsopoulos.

-Where can someone find out more about you?

On my page on MySpace where I publicize my DJ dates. I prefer DJing outside of Athens; I like to always be on the move. The frequent change of scenery gives a certain cinematic aesthetic to life.

-You seem a rather cinematic person as it is…

That’s been the case since the day I was born! I am actually involved in acting as I’m taking some acting seminars with Bernard Hiller at the moment – he’s a great acting coach from L.A.

-What does Ladystar stand for and why do you sign out as ladydust? is it a Bowie reference?

Every rock narrative needs its own “Ziggy” and the accompanying rise and fall; rock music in general seems to go hand in hand with catastrophe. yes it’s true I sign as ladydust; according to a friend I don’t really exist. I live inside AC/DC’s thunder, or the Rolling Stone’s tongue logo, in the sold out gigs at rodon and within the pages of Nme… (Laughs).

-All you need is love. is love a need?

Love is god’s way of testing human nature and its eternal potential, so therefore it is an illusion.

-What’s your relation with this illusion?

I’ve come to terms with my parameters. I was made to go through the same test and I am doing exactly that.

-What is rock about in your opinion?

It’s about an alternative approach, which is closer to the essence of things and can be expressed by a musical code or art in general. It is about discovering the truth through, questioning, redefining and aesthetics.

-You’re about to put out a compilation, is that right?

Yes, I’m about to put out a compilation of rock music containing tracks that have changed the way I see the world… it includes one hit wonders who still managed to have an impact on music and the industry.

-I know that you’re a Jim Morrison fan; do you ever come across such bona fide personalities nowadays?

Of course there are genuine people about, but you won’t necessarily be coming across them in showbiz. People are nostalgic and romanticize the past inferring that things were better then, but that’s not always the case.

-How would you define the everyday experience in Athens, during the first decade of the 21st century?

Greece is a country full of energy, yet alternative types have to struggle not only with themselves, but with a whole society that manages to combine the worst elements of the east and the west. It is just lucky that Greeks can be poetic and philosophical about things, as well as being extroverts in that Mediterranean way. That’s what keeps us going really.