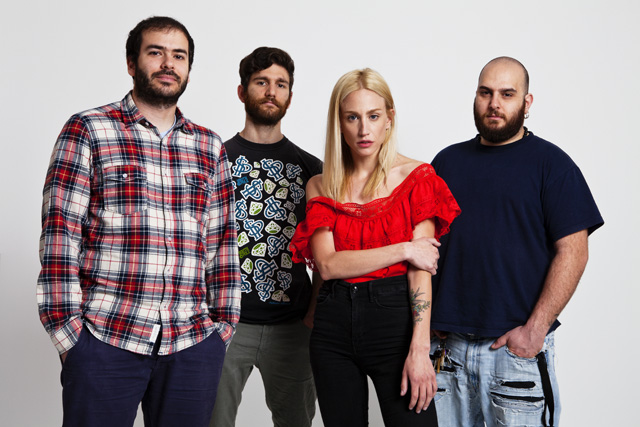 Puta Volcano’s eclectic sound finds them crossing the lines between desert rock, psychedelia and their very own brand of volcanic guitar music. Ever since 2010, when the band formed, they line up with Alex Papathanasiou on lead guitar, Stefanos Stefanidis on drums, Luna S. (a.k.a Anna Papathanasiou) on mic and vocal duties and Alexandros Miros on bass. They recorded their first E.P.,“Represent Victory Below Eye” in 2011 and handed out the limited edition recording at a live gig at 6 DOGS. The band is currently working on a new album, as well as a series of live performances.

What brought Puta Volcano together? Were you all friends before?

Alex P. – No. We became friends through the band. We and my sister Anna started the band, picking up Alex (bass) and Stefanos along the way. Me and Alex were actually in another band before Puta Volcano and when we decided to take things up a notch we knew where to turn. Karma led us to Stefanos and that’s how it all came together. That’s the best way to describe it.

How did the band name come about?

Anna – Puta Volcano is a name that came from the volcanic –like workings of the band and its sound. That’s your answer in a metaphoric sense. There’s a highly active volcano on the Chile-Bolivia border, that erupts all the time and the people there have named it Putana Volcano. We cut the name down for obvious reasons (Putana is the greek word for prostitute fight fans), and trimmed it down to Puta. But like I said, it’s got a lot to do with how the band works as well, its creative process. We don’t go into the studio with a clean plan of what we’re going to do. One day we might lay down five tracks and then do nothing for another two years.

When you play live do you usually play your own songs, or do you draw material from other bands as well?

Anna – We stick to our own material.

Ηow would you describe your music?

Alexandros – We’ve given it our own tag, after searching for a description high and wide. We call it volcanic rock and we get asked what that means a lot. We say “it’s exactly what it sounds like”. Like lava coming out of a volcano, that’s how our tracks come about. We gather in the studio and without anyone bringing any material in, the tracks just form. It’s a natural flow.

Your lyrics are quite unique and non-specific. They could be describing a single tale or multiple stories. It’s as if you’re describing a number of mood swings at the same time. Who writes them?

Stefanos – Alex and Anna write them, they base them heavily on personal experience. They’re personal, psychographic, artistic and artistic in their nature.

Alexandros – They come from a single or a number of personal experiences and their musical translation is quite subtractive. Ultimately everyone keeps what they think is important. Something that each listener can identify with.

Alex P – They’re quite subtractive, they contain a lot of symbolism that someone can read or hear and say “what are these guys saying”! But someone could also grab onto them and form his own idea and conclusion. It’s exactly what you said. It’s so subtractive that you can draw your own meaning from the lyrics.

Where do you see Puta Volcano a year from now?

Alexandros – Owning our own jet. Having a record out! To think that we can make a living from this. To maybe feel like the very essence of what we do can support itself, that the music can feed the music.

Anna – Right now it’s being supported by us. Whatever money goes into it at the moment, stays there and that’s how we support what we do. It feeds our souls, if I may put it so sweetly. What we would want in a year from now, is for a feeling, a sense, that there are ten people in the world who identify with what we are doing.

Alex P – Ten…that’s a low estimate! In general, in the short while that Puta Volcano have been in existence, there’s quite a lot of people who have provided us with very positive feedback.

Stefanos – We would want to evolve the project further. One of our flaws as people, is that we are not at all active on the social media side, so we don’t have a clear image of what people think of us. I think that how people feel about you is evident during your live performances, not social media “likes”. I’ve never seen an empty venue during one of your shows. What kind of feedback do you get from the crowd?

Anna – I have a strange perception as to how I come across. I can’t filter it at that moment. I think that the audience respects us, but it’s not the kind of crowd that will form a mosh pit. They respect what we do and we respect them. It’s very much a give and take. There is always a large crowd, but I think we’ll be in a better position to answer your question in September, when the album comes out, and people will have a clearer understanding of who we are.

You’ve been described as a “pack”. Yet you’re very different individually. There’s no clear link between you as people, which provides another interesting element when someone sees you on stage.

Alexandros – We look at that musically as well. We might end up fighting over a track, because we’re each coming from a different direction as far as our tastes go. It’s always beneficial, because healthy arguments help the creative process.

Stefanos – The result is something we can all agree on. We each put our egos aside for this project.

You’re all coming up to 30, your most creative age. You each come from different musical backgrounds. What are they?

Anna – There are common links, but yes. We each have a style of music that we alone listen to. I really like classical music for example and I’m not ashamed of it. I received classical training as a child, I played the piano for a number of years.

Stefanos – I’ve grown up with the Seattle scene, obviously the band’s common ground, but I’m divided equally between two styles. One is metal, but in the classic sense and the other is electronic music, like Daft Punk and the Chemical Brothes, with a little bit of the Detroit sound and Massive Attack thrown in for good measure.

Alex P – I come from a classic background also. Guitar then the piano. I vote for acoustic music in general, but if I’m being honest what I want to listen to right now is what we’re doing.

Alexandros – I’m going to switch it up. I hate classical music, I hate jazz. I can’t even listen to that stuff. I generally listen to whatever moves me. From metal music with a groove, all the way to dance music. Maybe the one thing I listen to, that the others don’t like is indie music. I prefer English indie rock, post punk maybe. However, there’s surely common musical ground between us. Stefanos listens to post rock for example, while me and Anna share a lot of common interest in rock music.

If you could come up with on image each, that would represent Puta Volcano, without it being a volcano, what would that be? Something deeper and more personal.

Stefanos – I have an image that never leaves my head. When I go into the studio to record I always stick to this concept: I think of sunlight and its warmth.

Alexandros – Something happy. We might sound like a stoner band, but that kind of thing brings with it a heavier imagery. However for us, what we do is happy process. Creating music seems like photosynthesis.

Anna – The light! It’s not this misery and doom that is usually associated with the stoner sound. We’re nothing like that. The desert element in our sound symbolizes that feeling of being utterly free, with no boundaries or walls. We keep hold of the positivity of the sun and of the limitless nature of the landscape, as it translates into freedom and undiscovered opportunities.

It’s strange that I asked each of you individually and all described the same image.

Stefanos – That’s how we communicate. There’s this phrase we use when we record. “Let a little more sun in”. We always know what that means, it’s when you need to brighten up the track, to let some sun in.

Alex P. – If you had asked me that question a year ago, I would have given you a different answer. It’s just that working on the current material, it has become very evident that we’re all in the same frame of mind and that’s something really special.