Sui Generis: Yiannis Korovesis is being interviewed for OZON RAW Giannis, has been serving up drinks at the Osterman bar & dining room, one of the most hyped bars of the local scene, since January of 2013. He is a lecturer at the Le Monde Institute of Hotel and Tourism studies, as well being the driving force and creator behind bitterbooze.com. It’s no secret that he has one eye on being a radio show host one day, and if he wasn’t a bartender, he’ d want to be Greek singer Loukianos Kilaidonis, or Peter Sellers, or Truffaut, or Kandinsky or the entire Monty Python gang.

-Even if someone has never actually met you, they will have surely heard your name being connected with the words “cocktail” and “Athens”. How does that make you feel?

The meaning of the word cocktail and all that it encapsulates is something that is an everyday part of my life. I also meet a lot of people every single day and I think I provide living confirmation that mouth to mouth advertising works. Of course I’m proud of the countless hours of hard graft that I have put into this, of all my research, writing etc.

I’ve been involved with this industry since 1999 and have worked a variety of posts during that time. What you called mixology is a relatively “young” phenomenon in this country, about 3-4 years old. Like everyone else, up until 7-8 years ago, I was making “kamikazes” and “B-52s” and other such colorful cocktails from the 80s, though not all of them were as cleverly named. Fortunately, those times have passed and they only thing I care to remember from that era are some good co-workers.

-Is it a profession that has always attracted you? Was it something that you always dreamed of becoming involved with?

Bartending was like a girl that always wanted me and I constantly played hard to get. My first job in the industry was working as barman and waiter at a local bar. That’s where we met. I briefly left her, since my parents never agreed, but she eventually worked her mysterious way with me. I’m just afraid that a time will come when there will be a crisis in our relationship and I may look to leave her for another girl/profession. -What makes a cocktail special?

I hate “mainstream” flavors. And by that I mean cocktails that are “flat” with nothing to excite you with. I like making cocktails that someone will either love or hate. That’s not to say you must leave out all the “crowd pleasers” from a cocktail list. I mean at the end of the day, you’re making drinks for your customers, not for yourself.

-You’ve created a blog, bitterbooze.com, that has become very popular.  What is it that you want to project through it?

-Is the blog something you handle alone? Do you intend to keep it as a blog or perhaps expand it?

Like they say about successful men and the women behind them, so is the case here as well. Though slightly different. Behind me, handling the entire digital structure sits my friend and professional web developer Yiorgos Tsimenis. I also owe many thanks to Katerina Paspaliari and Thimios Voulgaris, who have assisted me greatly with their imagery and photographs. Various texts have also been contributed by Electra Ellinikioti, Yiorgos Mizalis, Apostolos Papadopoulos and Achilleas Anastasopoulos and it has been an honor to have them write for the blog. As far as any future plans go, I think that the blog is the only thing in my life that progresses ever forward, with slow but steady steps. I don’t know what the future holds, I think I might just take everything as it comes.

-Booze aside, you seem to be particularly interested with style, with your own take on it leaning heavily on the 60s. How would you describe it?

I do believe quite strongly in each person’s distinctive style and their ability to support that choice. My style has been described as charmingly eccentric, candidly vintage, or post-modern snob. Wherever it may fall, I try and switch it up every now and then, by moving between the 30s and the 60s. 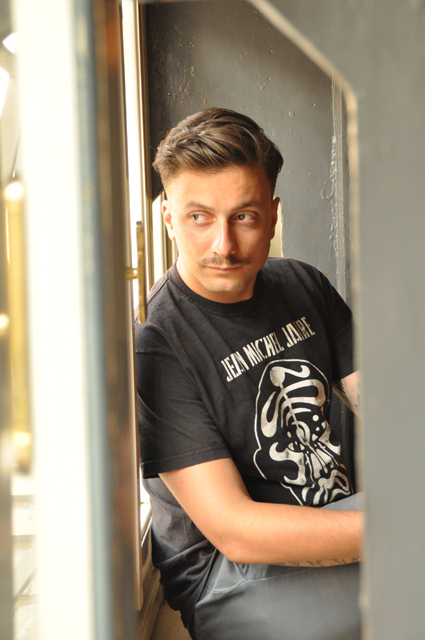 -What’s your favorite drink and what is your relationship with alcohol like?

I enjoy American and Irish whiskey, aperitif wines, fortified sherries and amaro liqueurs. I treat alcohol like food and drink different things according to the moment and occasion. An aperitif before a meal, beer or wine while dining, a digestive afterwards, champagne and many cocktails for all hours, nightcaps to end an evening etc.

What’s the most thankless part of your job?

Having to serve many people at once, without being able to offer them the quality of service that you would like.

-Tell us something about you that we would never guess.

I have a large selection of cacti and orchids. I also have a phobia of bath tubs. I’m a poor and lonesome cowboy and the greatest fan of Loukianos Kilaidonis in Greece. -Tell us your ideal cocktail for the summer and the reason for choosing it.

The ideal cocktail for the summer is the Spam-a-lot punch, which takes elements from Polynesian tiki culture, combining a Brazilian and a Trinidadian rum with pineapple, biter almond, cinnamon, lime and lemon juice and homemade rose-flavored jam. It takes its label from the musical of the same name, which was based on Monty Python’s Quest for the Holy Grail.

You can find Yiannis @ the Osterman Bar & Dining Room in Athens.