He grew up listening to hip-hop and participating in vandalism on the infamous streets of Georgia in the 80s. He studies fashion design at the Royal Academy of Fine Arts, and after collaborating for many years with well-known fashion houses, such as Maison Margiela and Louis Vuitton, he later became the co-founder and team leader of the Vetements label. Recently he was appointed Creative Director for the fashion house Balenciaga, and this has made us curious to learn more about him and his work.

In only a few years, he has managed to successfully obtain credibility, something many large companies strive for. This is due to the fact that he has managed to keep his publicity in balance with his beliefs. His brand Vetements (which means “clothes” in French) was founded in a basement apartment in Paris and had a very specific mission; to bring the focus back to clothes. This may sound simple but it is, indeed, revolutionary, since nowadays fashion shows are mostly atmosphere orientated, leaving the visitor overwhelmed by the branding and the presentation of the clothes rather than the clothes themselves.

Demna Gvasalia, the founder of the company, was born in 1981 and raised in Sukhumi, Georgia, a city located between the Black Sea and the Caucasus region. He later moved to Belgium to study men’s fashion design at the Royal Academy of Fine Arts of Antwerp. In 2009 he moved to Paris where he started working alongside Martin Margiela, who significantly affected his technique and aesthetic identity. Later on, Gvasalia joined Louis Vuitton and was the Senior Designer for their men’s collections up until 2014. He then left the company to found Vetements and define his own creative identity.

His creative identity is based on an important concept: true freedom. Having lived as a child under the political system of the Soviet Union, the level stimulation he received was limited. This economic and political system may have promoted important principles, such as the equal right to health, housing and education which initially raised the living standards of the country. However, Marxists and communists claimed that socialism was ineffective. The public opinion was manipulated and art was restricted. “There were only two fashion magazines which promoted an extremely conventional style”, according to Gvasalia in an interview he gave to 032c. He has also mentioned in the past that he first laid eyes on a Fanta, a Coca-Cola and Vogue magazine in 1991, with the dissolution of the Soviet Union. That was also when he began to acquire the resources for his work.

Up until then the resources available to him where very limited. He enjoyed creatively experimenting and expressing himself though clothes, but most of the children would wear the same clothes every day. In Georgia people would usually wear black which gave a dramatic element to their appearance. The only thing about their appearance that was beyond convention, was the heavy make-up women would wear, and in some cases, the use of random materials to decorate clothes. Vetements is based on this philosophy; the materials used for his creations give you the impression that they are unique but, in fact, they are meant for a wide range of people. There are hip-hop influences and dramatic elements to all of his creations. 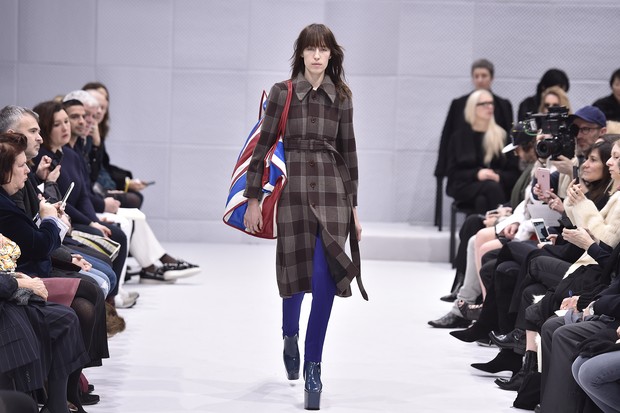 Gvasalia’s success lies in respecting Balenciaga’s history and in the concept that his own brand reflects: freedom. He said, “I am looking forward to further expand the DNA of the house and, together with the team, to write a new chapter in its history.” Gvasalia will present his first collection for Balenciaga in Paris in February.

No Sales For Gucci Anymore