ART ATHINA 2018 – Through the eyes of a visitor

Since 1993 ART ATHINA has been consistently showcasing some of the most exciting contemporary art from Greece and around the world. This year saw over forty Greek galleries present artists as well as a number of carefully selected international galleries curated by Stamatia Dimitrakopoulos.

OZON have teamed up with a new contributor from the UK who is going to take you round his favourite moments of ART ATHINA. Thomas Dixon is an Art History student who has never been to Greece before so had no idea what to expect. We sent him out on his second day to check out some of the most exciting contemporary art on show at the fair, hosted in the Athens Conservatoire for the first time. After exploring dozens of amazing presentations, he shares his first impressions of artists and galleries to keep an eye on. 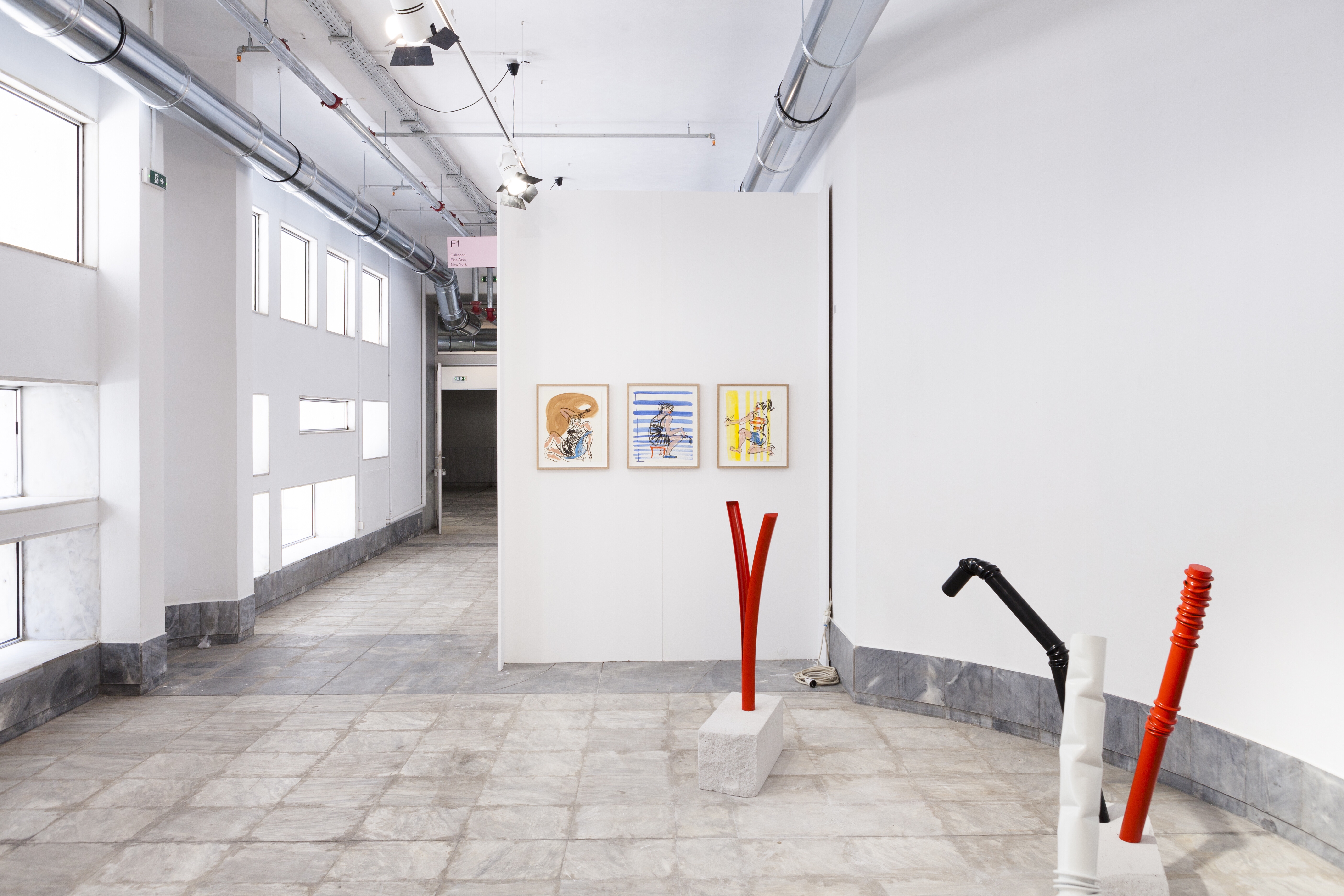 Ella Kruglyanskaya is originally from Latvia but now lives and works in the USA. Working across a multitude of mediums, Kruglyanskaya creates paintings and sketches which have a graphic quality to them, often with the female body as the focus. Her energetic and vibrant images have caught the attention of a number of notable galleries across Europe and North America. Speaking to Emma Astner, she mentioned that interpreting the figure or the body as a personal or political theme is central to Koppe Astner’s vision as a Gallery which strives to represent artists working with these narratives. 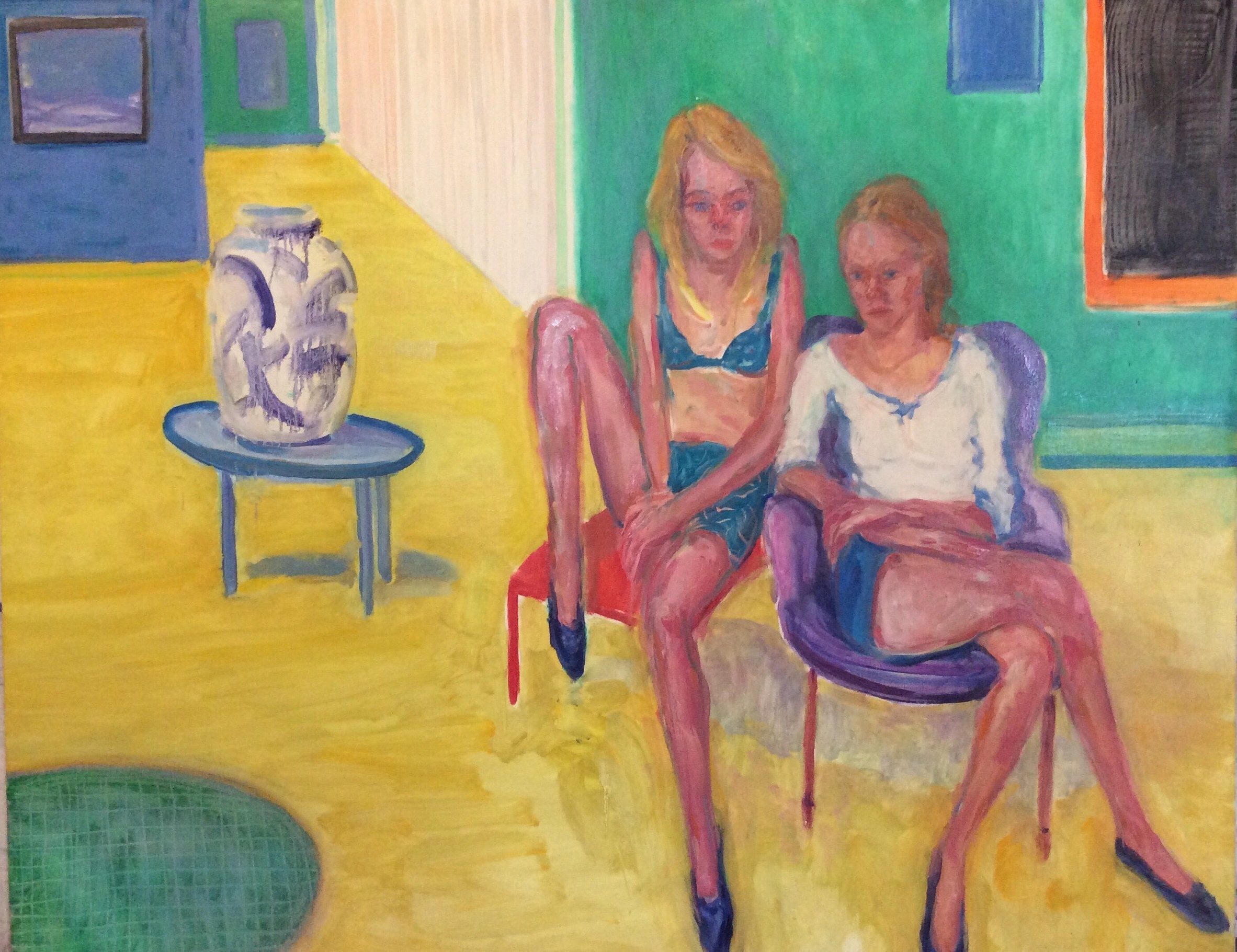 George Hadoulis was born in Athens and continues to live and work here. His paintings employ psychedelic colour schemes which reinvent the spaces and figures he depicts on canvas. Accompanying his paintings are a number of ceramic vases which continue his bold use of colour and set up an interesting relationship between the sculptures within the paintings and outside of them. Yannis Kalligas from Skoufa Gallery finds the immediacy of Hadoulis’ paintings integral to their appeal and, with the rest of the gallery’s both, attempts to shows objects which are eye catching and elicit an immediate response from the viewer. 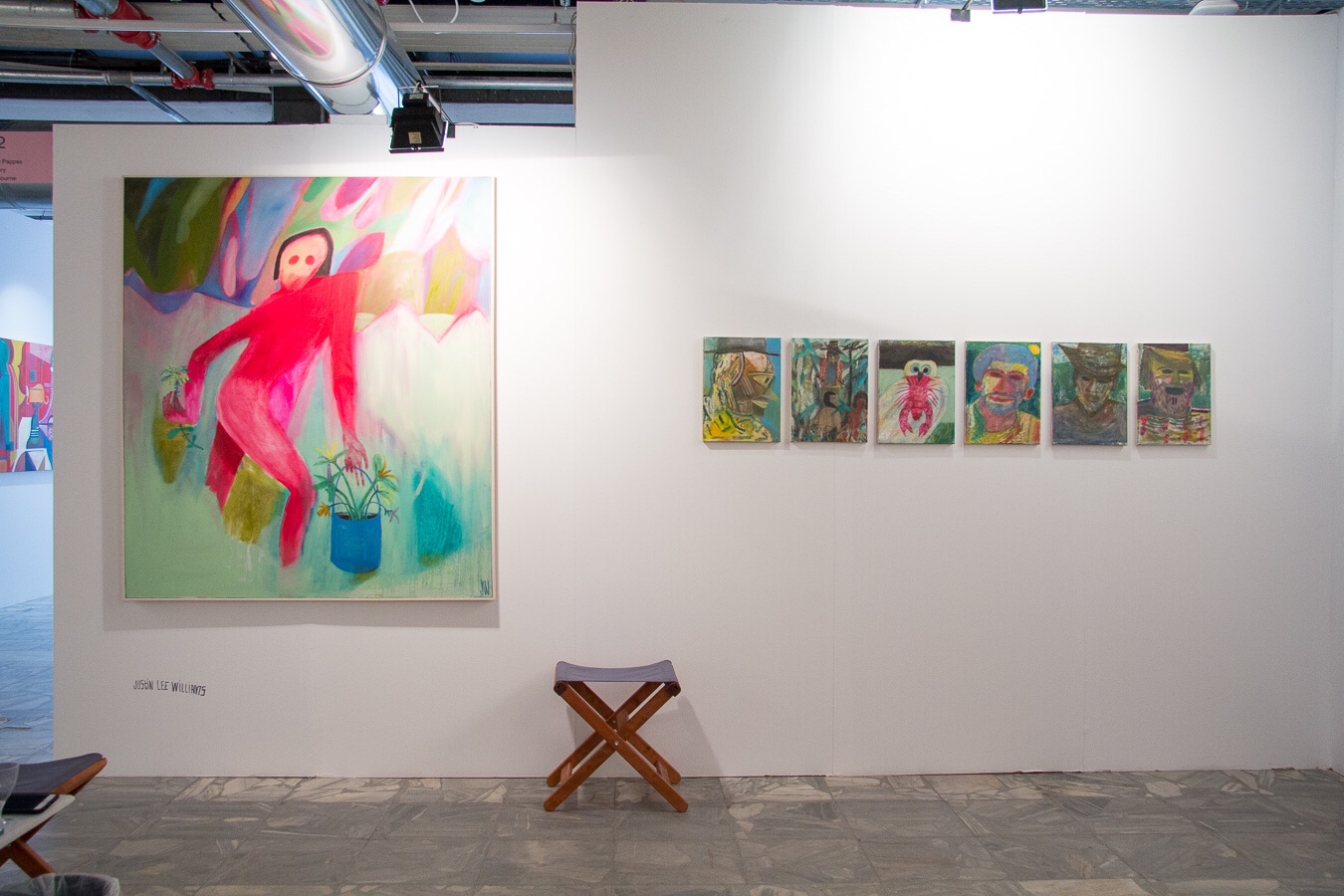 Justin Lee Williams is based in an isolated studio in the countryside of Victoria, Australia. His work forms a kind of investigation to myths, folk tails and outsiders. Williams shared one myth in particular that caught his attention: a story about a travelling circus from Holland which came to Australia with a panther which somehow escaped and bred with local wild cats. Rather than trying to directly replicate the image of the panther or the narrative of a story, Williams simply alludes to the myth, using shifting, undefined and mysterious figures to emphasis the dubious nature of these myths. 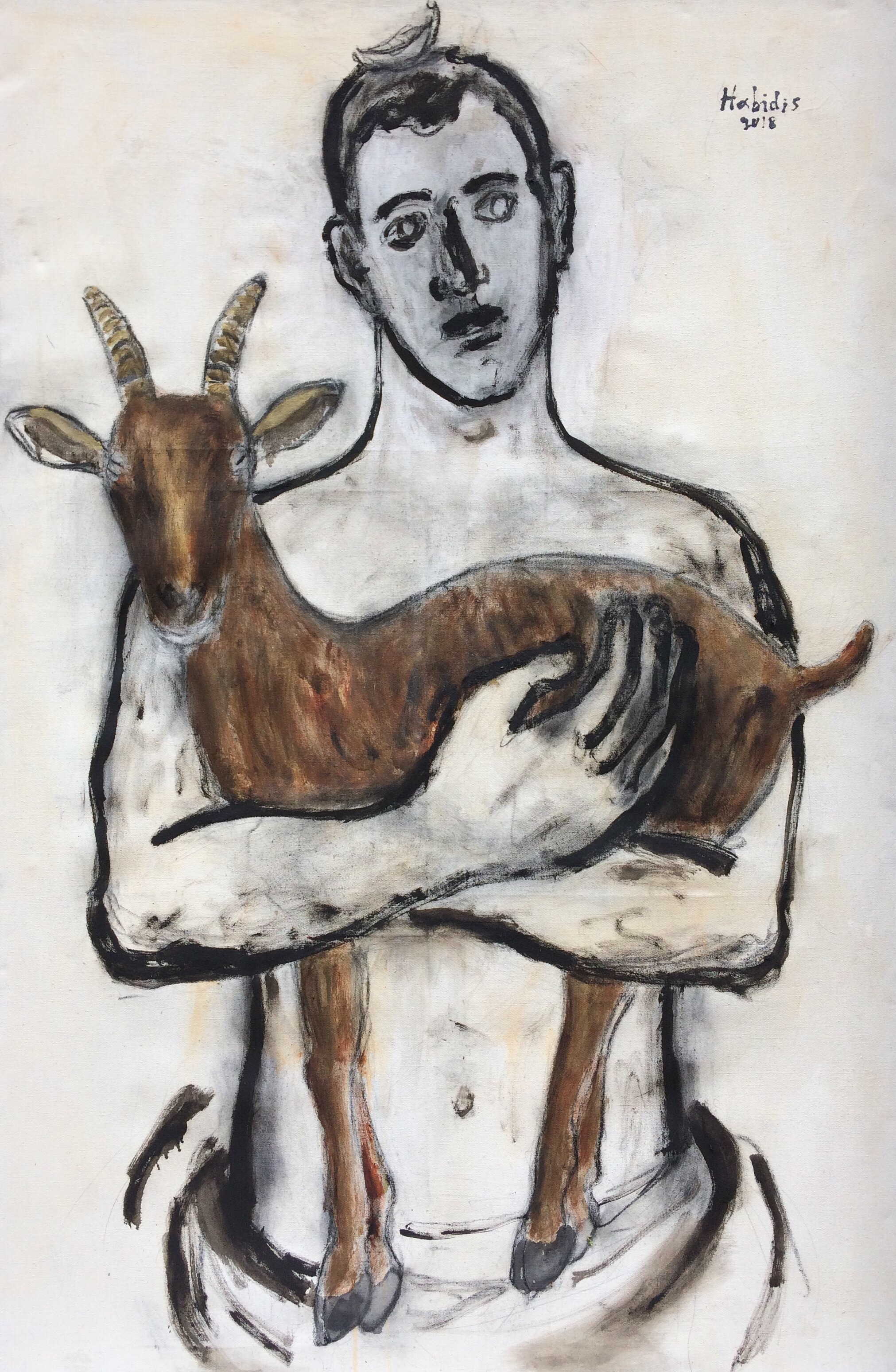 Pavlos Habidis is from Thessaloniki but traveled extensively around Europe before coming to Athens in 2001. He has exhibited internationally and revived a prestigious commission from Louis Vuitton in 2004. His approach is sketchy and loose but retains its closeness to life. Yiorgos Tzaneris, owner of Gallery Genesis, described the artists he represents as “realists” and emphasised the importance of exhibiting fresh up-and-coming artists besides older, mid-career artists to try and formulate the futures of these artists. 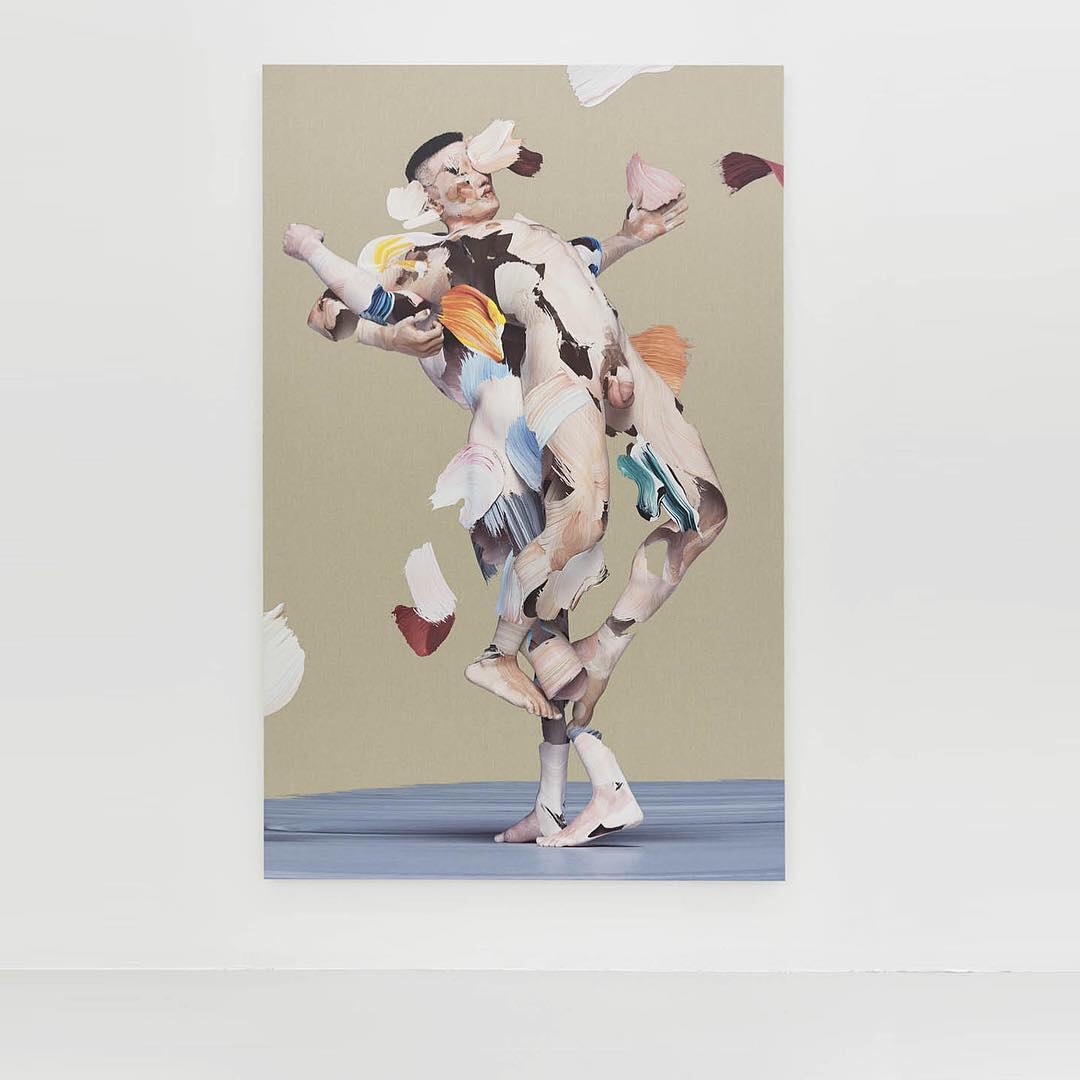 Mathew Stone is a British artist based in his home city of London. Stone began his career working with photography but soon developed his own technique to generate images. Kathy Grayson, of The Hole, described Stone’s technique, he begins by painting a single brushstroke onto a plate of glass which he then photographs on both sides. These photos then become textures or objects he can manipulate with computer aided design software to create figures and limbs. Each image comprises of a few hundred of these strokes making it an incredibly labour intensive process. When the final result is finished on a computer it is then printed onto a sheet of linen in a single edition. The Hole is currently exhibiting some of Stone’s work in a show by Stone titled ‘Neophyte’.