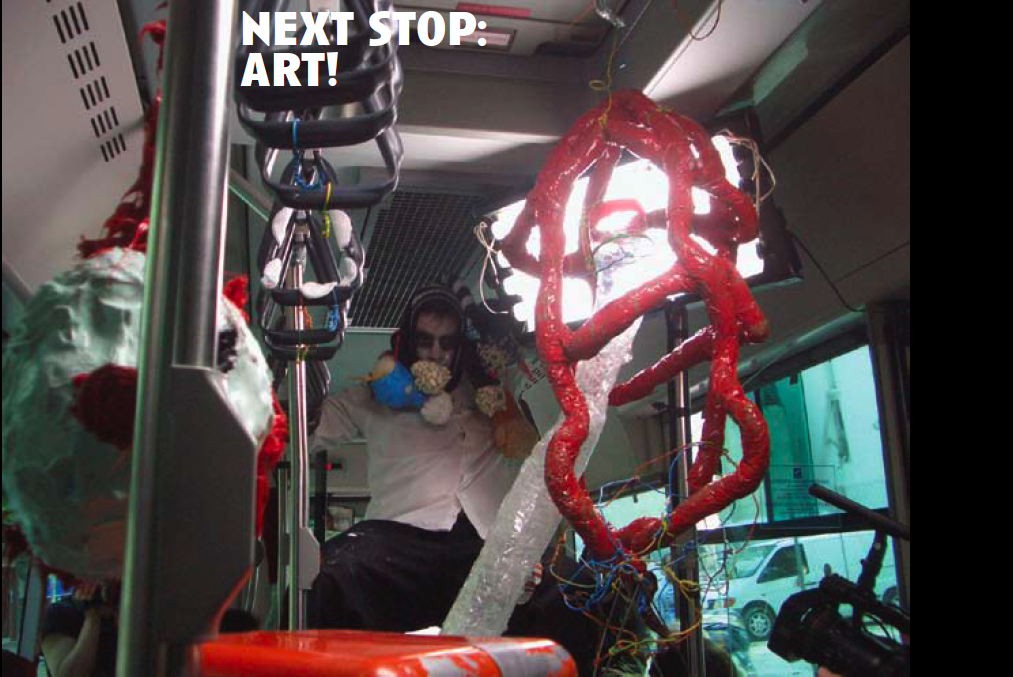 GERMAN VISUAL ARTIST JOHN BOCK CAME TO ATHENS TO PRESENT AN ORIGINAL PERFORMANCE AND CHOSE TO HOLD IT ON A CITY BUS. WE DIDN’T MISS OUR CHANCE TO GET ONBOARD FOR A DIFFERENT KIND OF RIDE THROUGH THE CITY’S STREETS.

John Bock, one of the most significant figures of the contemporary German art scene, is known for his performances where the unique use of speech is combined with a homemade scenery made out of sculptures and everyday objects, so at noon on the 29th of October, inside the bus the artist’s indefinable constructions dominated the scene: balls filled with shaving foam, tourist statues, the head of Hippocrates with colorful stones riveted onto it and many tubes of toothpaste, as well as the tentacles of an “octopus” made of foil and plastic which were wrapped around the handrails.

Bock then appeared with his face painted white and large black circles around his eyes. Taking on the role of a tour guide or a lecturer, he began explaining in serious tones the complex modes in which the organisms, represented by the sculptures, functioned. In English – and featuring a heavy German accent which was even more incomprehensible by using his own invented words – he defined the event by announcing the “five rules of nothing.”

For 45 minutes while the bus continued its progress along the main streets of the city, Bock crossed the aisle numerous times, stood on chairs, jumped over the viewersÅL heads, climbed on the windows while reciting poetry, rubbed toothpaste on members of the audience’s feet and made them wear his creations in an interactive performance.

The atmosphere was constantly shifting, from comical to uncomfortable, in what could be described as a well orchestrated game of rotating moods. At the final stage of the performance Bock put a punctured suitcase on his head as part of a peculiar puppet theatre performance inspired by the legend of Odysseus, the meeting with the sirens and the battle with the Cyclop.

Escaping from the bus and returning to the familiar image of the chaotic city centre of Athens at noon, we realized that the – apparently absurd – experience of this short journey was perhaps not so very far from our modern day reality.