Russian punk band and protest group, Pussy Riot have had a mad one. They made a splash last Sunday by storming the FIFA World Cup final, got arrested, followed it by releasing a song, got sentenced to 14 days in prison and have been rewarded €50,000 for an arrest which violated their human rights 6 years ago. Sounds like a lot doesn’t it? Let’s rewind for a second and unpack what happened.

The feminist punk rock group was established in 2011 and since then has staged performances and protests that directly criticise Vladimir Putin, his party and their politics. They became prominent after three of their members were arrested for a performance in Moscow’s Cathedral of Christ the Saviour in 2012. Their trail was picked up by the European Court of Human Rights and last Tuesday (17th of July) they announced their findings that the women has been wrongly imprisoned and should be given compensation of €50,000 by the Russian government, a fifth of what the group had requested but still a significant win. According to the court, the three members of Pussy Riot were “denied their right to a fair trail” but the government now has three months before the decision takes effect so it is likely they will file an appeal.

In an equally high profile protest on Sunday, four members invaded the pitch during the World Cup final about fifty minutes in, creating a twenty-five second delay right in front of president Putin who was watching from the stands. One protester got a high five from French football player Kylian Mbappé which was captured in a heart warming photo which went viral on Twitter. Croatian defender Dejan Lovren didn’t take so kindly to the interruption and grabbed one of the protesters violently. In an interview they stated that the stunt had been easy as the stewards didn’t question their knock off police uniforms. They had each ordered a fake one for around €70. Before the stunt they apparently practised by running round a local football pitch. 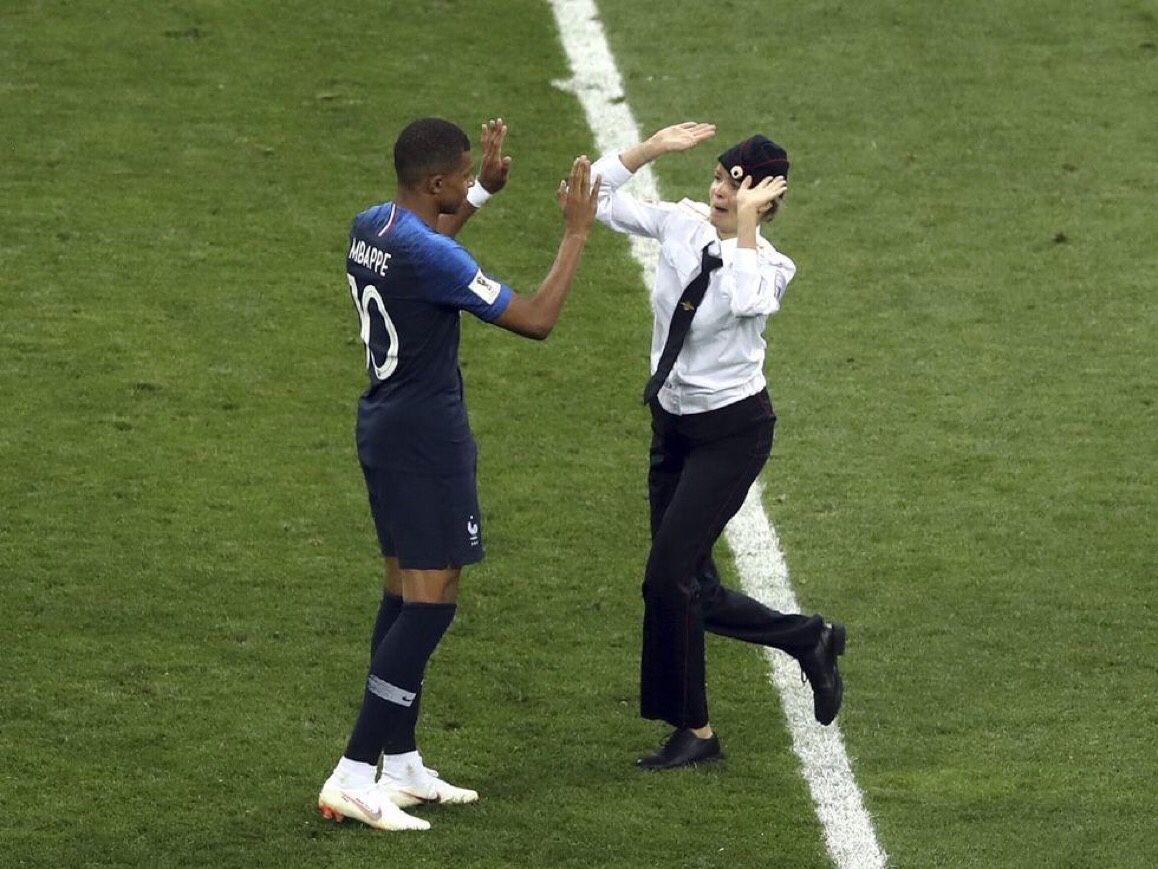 The four members were dragged off the pitch by security and then arrested. While awaiting trail they were denied access to a lawyer and charged with two misdemeanours. On Monday (16th of July) they were officially sentenced to 15 days in prison and banned for three years from any sporting events.

After their stunt on Sunday the group released a series of demands on social media along with a new music video called Track About the Good Cop. The nine demands targeted censorship in Russia and included “freedom of speech and expression in Russia.”, “stop mass arrests at political rallies” and “free Oleg Sentov and other political prisoners”.

The music video focused on mocking the Russian police and the critiqued the undue respect given to the uniform. The video shows people dressed up as police and army members dancing in the snow with strobing colours. Lyrics like “we are dancing we are not cops” point towards the insidious nature of ‘friendly’ or approachable policemen who actually have disguised intentions.

Hopefully these set backs won’t stop the band from continuing their tour of the U.K. this August which sees the group perform a play called Riot Days.