Being queer in Greece is not always easy. In a largely conservative country many people still don’t understand or accept members of the LGBTQ+ community. Legislation claims to protect these people but many incidents of homophobia or transphobia go unreported. Queer parties are inclusive safe spaces for LGBTQ+ people to be themselves, relax and express their identity on the dance floor. We talk to some of the people instrumental in creating these vibrant underground parties. 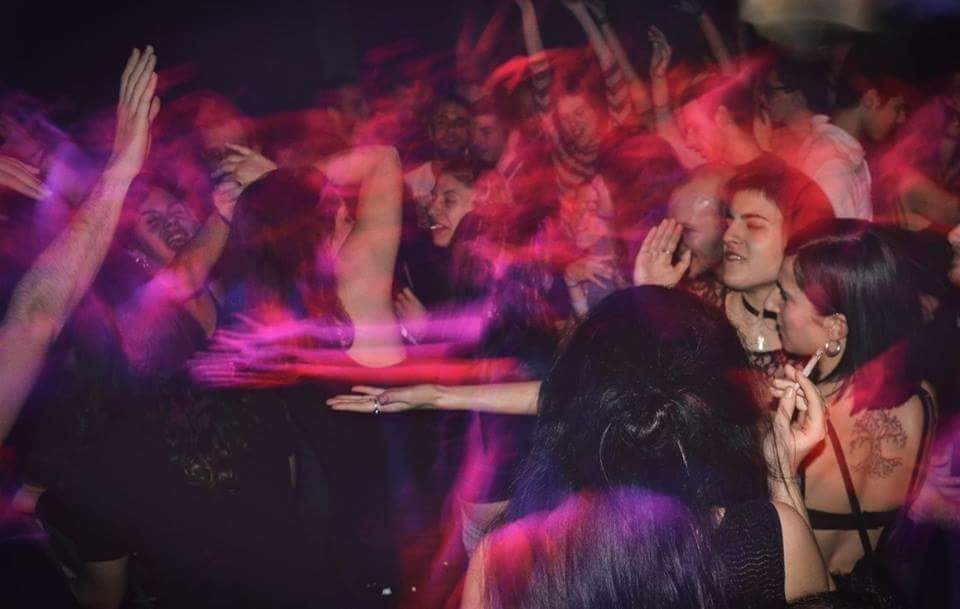 Could you start by telling us a little about yourselves? Who is behind the night?

When we first started there were four of us, Gelly, Irini, Lena and Reiko. Lena and Reiko have since moved abroad but whenever they’re back they take part in the parties. All of us are both promoters and DJs. Irini is 39  and she is an actress, DJ and a nursey school teacher who teaches German through theatre. Gelly is 34, has studied Philosophy of Science and works as a DJ.

What kind of music is played at the party and where is it usually held?

We always try to combine different kinds of music, from electronica and synth pop to techno, trash, rap rave, R&B and pop, to name a few. We define our parties as mobile queer parties, so we try to find new venues, if possible. We used to have parties at Booze Cooperativa, Skullbar, Rabbit Hall, Beaver and lately at Second Skin Club and Spinster. We often take part in fundraising parties for a good cause, such as Patras Pride, Athens Pride, feminist organisation “Kamia Anohi”, NGO “Rainbow Families” and B-fest. 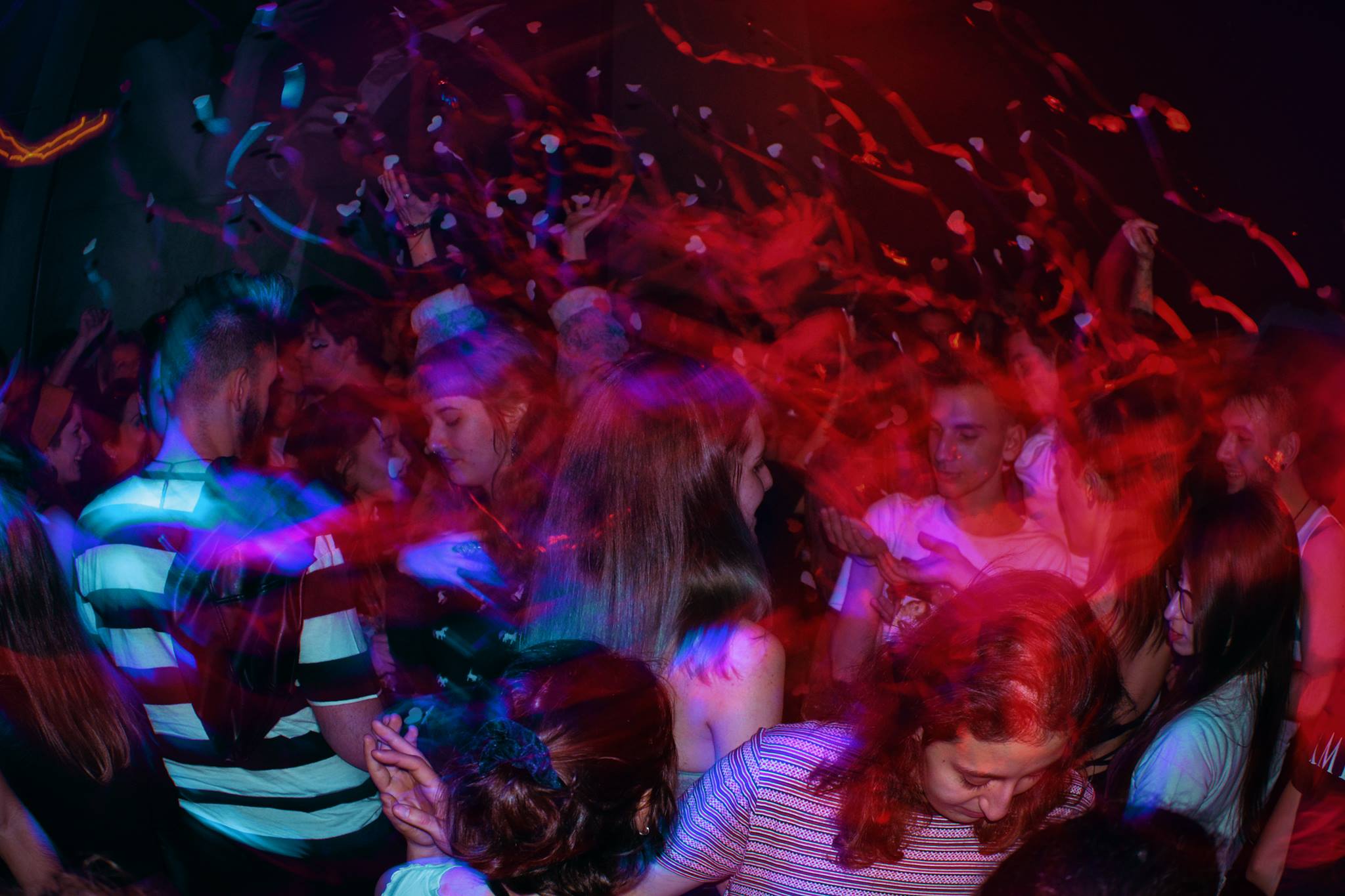 When was the first party and why did it start?

Our first party took place in Beaver, a women’s collective, in May 2015. The first time we did it purely for fun. Irini was going away to work on an island for the summer season, so she gathered us together to throw a farewell party. We liked each other, the feeling, the music, we wanted to share it with other people and we decided to establish it properly as there weren’t many queer or lesbian parties back then and the music sucked at mainstream gay/lesbian bars. So, we threw our first official party as V-Productions at Booze Cooperativa. We later changed our name to Strap-on Unicorns.

The queer scene in Athens is getting bigger and bigger and we are very glad about it. More and more creative people are expressing themselves through queer arts, performances, theatre etc. There was this need and now it is beginning to express itself and bloom. Queer parties are becoming very popular though they still manage to keep their unique queer character.

Can you tell us when your next party will be and where to find out more?

Our next party is on the 15th of September in Spinster. You can find more on our Facebook and Instagram pages, Strap-on Unicorns. 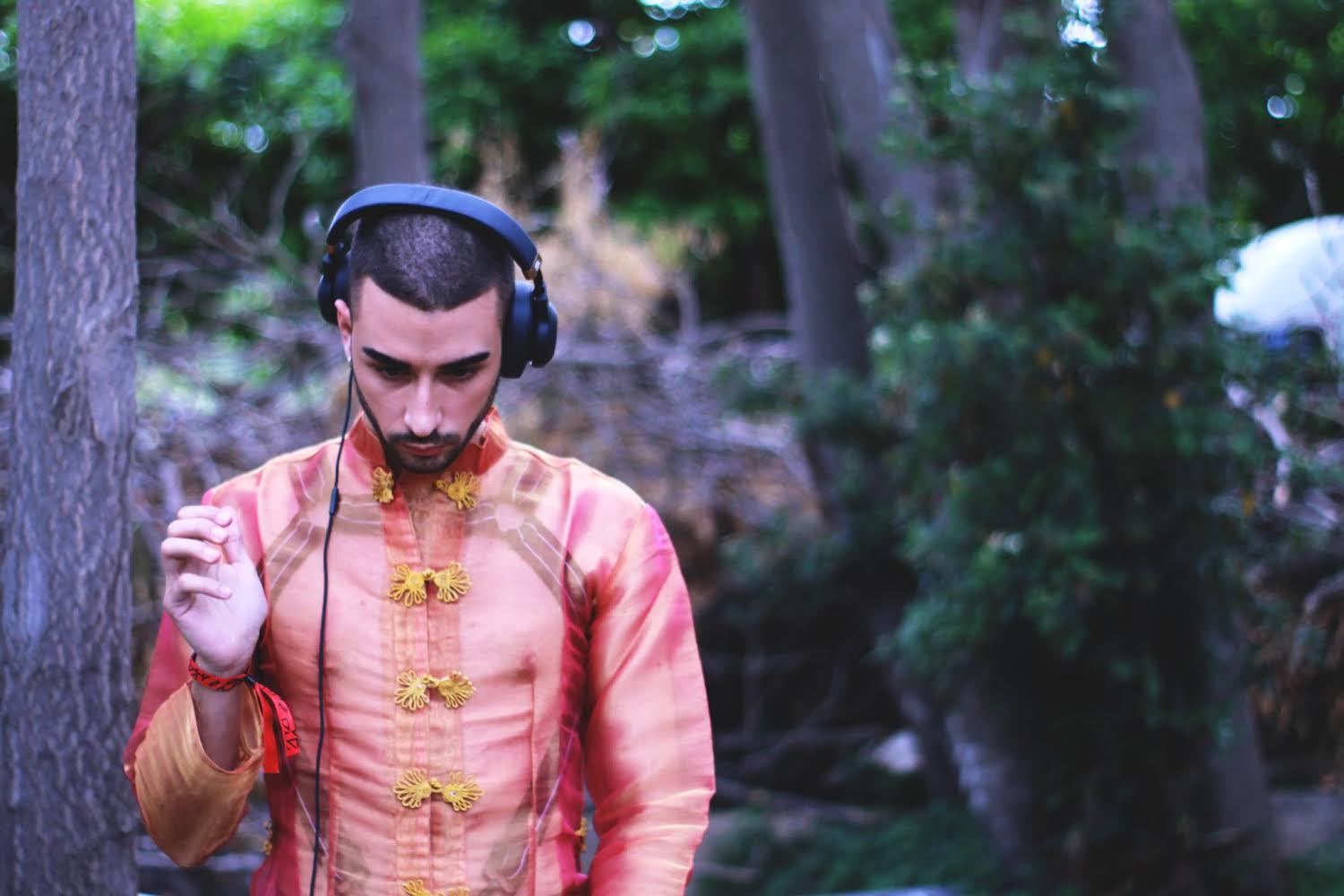 Could you start by telling us a little about yourself and your involvement in Qreclaim and Schenkens?

My name is Giorgis Benias, I’m 22 years old and I got into the university of Athens but never followed my studies. Somehow, at the age of 17, I started practising with DJ programs and controllers (with not much success at that time). By age 21, I had an intense desire to put on a small private party in the centre of Athens, mostly because I wanted to play music for the very first time as a DJ in front of others and because a friend of mine had access to a really cool Athenian retro space. So, in February 2017, I made a private event on Facebook, where I made it clear on the description how I wanted the party to be. A celebration mostly for LGBT+ people based on the principles of rave and sex positive cruising culture. Despite my eloquent description and all the cool graphic designs I’d made (things I did because I enjoy contributing and working on everything during an event) I wasn’t expecting lots of people to actually come and join the event. I was wrong. More than 800+ people joined the very first Qreclaim and left me speechless. I somehow realised that my vision combined with hard work could lead Qreclaim to an important part of the Athenian nightlife. And at that time I wasn’t wrong.

During every Qreclaim, I’m at the door working all night checking who should get in and who should stay out of the venue. Cause I know the people who join Qreclaim from the very first event, I know who the straight allies are etc. And also people here are not like the people in Berlin, when you refuse entry to someone you know immediately that they will start punching you in the face and being violent no matter how many security people you’ve got. Straight people here don’t expect that they might get refused entry, so having a strict door policy in order to create the kind of space you want is like establishing a new culture.

The Schenkens Sanatorium is my second project after Qreclaim.  The first one took place half a year ago and the next one will happen at October. It’s for sure the “kid” of my love for the club kids era of New York. I grew up learning every detail about those people, their visions, their fashion choices etc. So after Qreclaim, which is a “dark” event, it was time for me to create a colourful one. Hosting two, so different and similar at the same time, events reflects who I am I guess. A club kid event is a much more difficult project than Qreclaim because there is no culture in the city like that at the moment.

What kind of music is played?

Qreclaim is all about techno and house music. Till now I’ve managed to book stunning retro and neoclassical Athenian houses, since my love for those kind of places is huge. Doing a techno party at an industrial venue sounds quite boring to me to be honest. The latest venue was a 2 floor mansion in the centre of Athens, with a big backyard, and countless rooms for having sex, dancing, sleeping, talking and chilling with friends or for watching a performance while ambient music is being played in the background. I perceive a party as a good one when it gives me the chance to express, through day or night, many emotional aspects of my character and have changes of scenery easily.

Schenkens is about disco & house music. Schenkens takes place at discotheques and flamboyant places. Crazy and surreal, the kind of places that can host a club kids event.

What is queer anyway? It’s not even clear to me. When I called Qreclaim a queer event a year and a half ago I wasn’t sure what I was talking about. People think Berlin is queer for example, but what makes Berlin a queer city? Can something be queer and super commercialised at the same time for example? I don’t have answers to those questions. I can only talk about my personal experience as a young person who doesn’t perceive gender in the common binary of male and female. I do feel that lately there are more things that an LGBT+ person can do in the city of Athens, and that there is an interesting scene to be explored, but it seems that if it’s not about a party then it only really effects a small number of citizens at the end of the day.

Can you tell us when your next party will be and where to find out more?
Qreclaim is happening 3 times per year. Finding a venue is such a hard thing, so I can’t tell you when the next one will be. Also there is no Facebook page or website to check. The best way to learn when the next Qreclaim will be, is probably by talking to a local who attends the events. You can also follow my DJ Facebook page “Figkott” and message me so I can keep you updated. 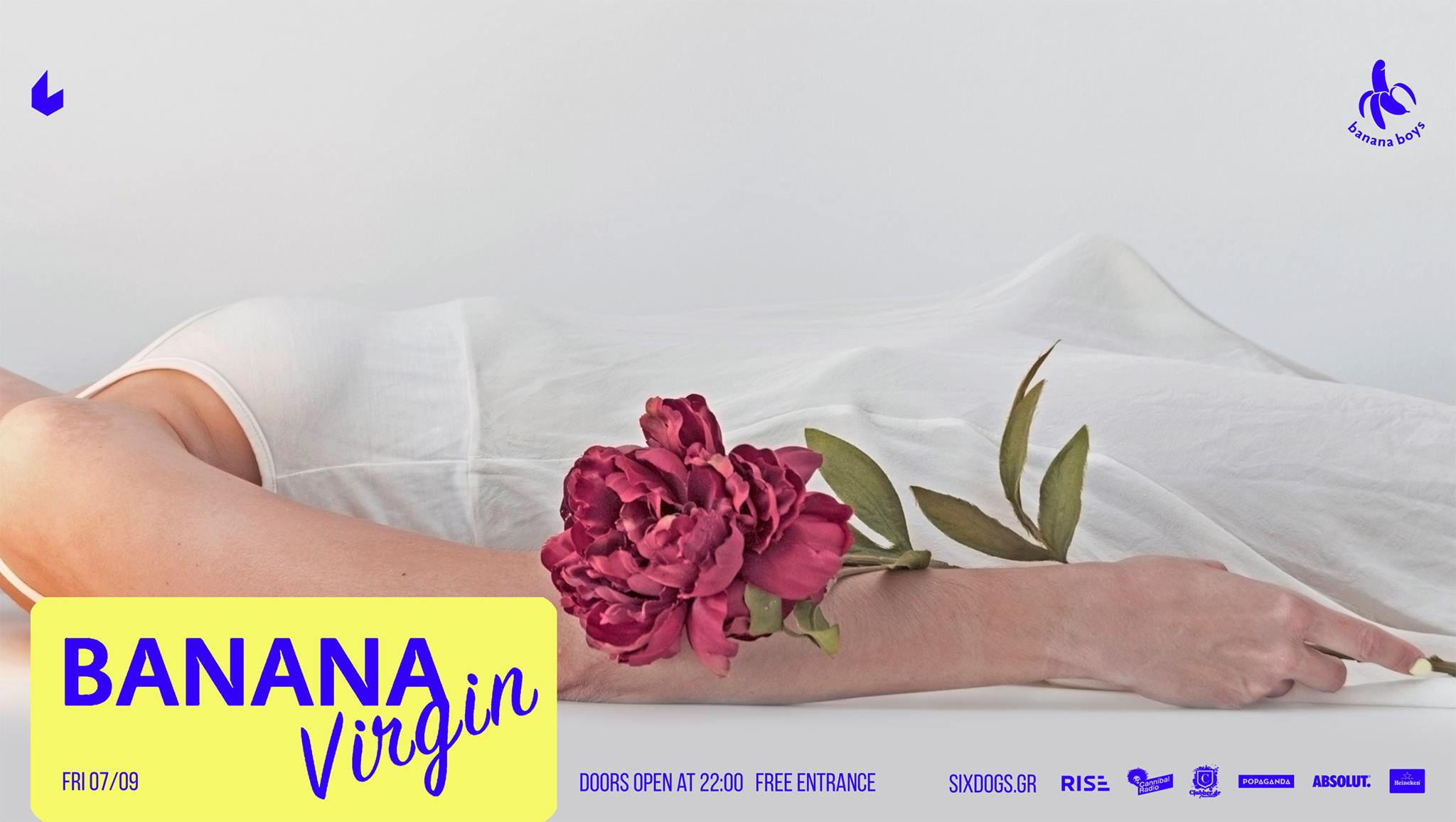 Could you start by telling us a little about yourselves?

BananaBoys consist of Ioannis (31) and Odysseas (28). We both have artistic backgrounds and work in projects across theatre and visual arts, etc. We are the hosts of our parties. That means we organize the party, we give the party an identity – a name and a theme, we invite the DJs and the acts, we decorate the venue, we promote the party on social media and we play the part of the party-makers during the night too.

What kind of music is played at the party and where is it usually held?

We love to have various kind of music genres at our parties so we mostly host DJs that play dance/ electro/ disco/ pop/ old-school music. We don’t want to throw sophisticated parties (which we love but are not for us) and we say that fun is the thing we want our parties to be remembered for.

We also don’t have a standard venue. Due to the BananaLovers who follow our parties, there are not many clubs or bars in Athens that can actually host one of our parties. So for example we have collaborated with Booze, Six Dogs, Romantso, Spinster, Shamone and this year we had an amazing experience hosting two parties for Gucci.

When was the first party and why did it start?

The first party was back in 2015. It was the opening party for Spiti Yoga and the launching of our parties too.

Good for us we never asked ourselves “why” we started throwing parties. It was more like a why not, let’s have some (more) fun!

There has been an immense upgrade in the queer scene in Athens. Lately, there are more and more queer people walking in the streets of Athens at night supporting diverse identities and backgrounds, more and more queer parties and shows of gender (and sexual) liberation and more and more hetero-normal people diving into this culture exploring themselves and getting to know us better openly and without fear. Queer performances and drag shows are a must in the underground scene of Athens, happening almost every weekend and venues are even cooler with queer people being truly respectful to everyone’s identity. We still have a long road to walk until nobody is in its closet and nobody gets hurt/pushed/bullied/ignored/hated in the streets and the bars of Athens but we can’t not applaud the progress that’s been made. We are glad that we are part of this <3

Can you tell us when your next party will be and where to find out more?

Our next party “BananaVirgin” will be the opening party of the season at Six Dogs, on September 7th. This year, BananaBoys will collaborate with six different artists, mainly photographers, to create the visual identity of each party. For this party in particular, we collaborated with the photographer Dimitra Papageorgiou. Some BananaMusic will be performed by Clubkid and IOAN. Maybe we will have a secret act. But anyway you can find out more about it on our Facebook or Instagram page and stay posted.