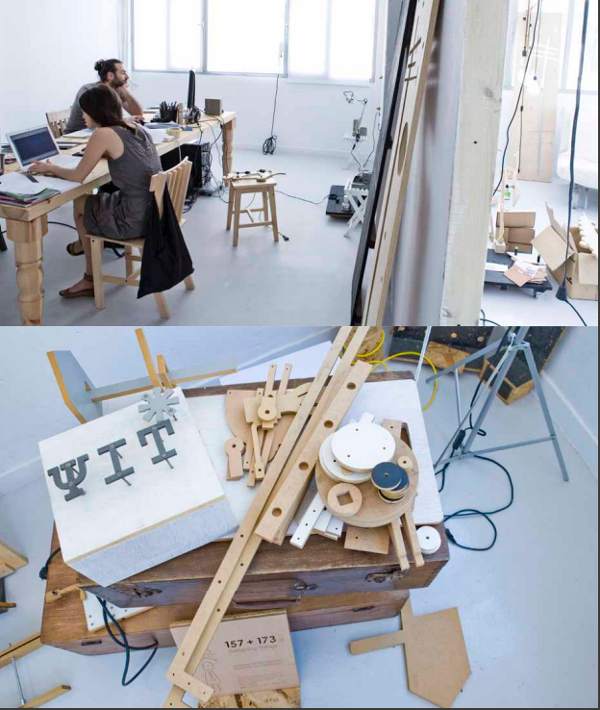 Having studied architecture in both Greece and the UK, Babis and Christina decide in 2009 to create their own studio. 157+173 designers emerge out of their need for play and expression through materials and form.’Until then we were working for other architectural practices’ Babis says, adding that ‘at one point we felt that the time was right to create something of our own and work in our own way.

’Their studio, located in an old abandoned warehouse, was also a project made with a lot of personal effort. Now white is the dominant colour together with a variety of materials and forms. Materials such as timber, concrete, metal and glass are made into objects that could be part of Dogville’s set, composing a theatrical scene, an interplay of two dimensional forms, views and perspective.

Their two dimensional compositions may also be inspired by Christina’s second occupation, that of her model making in collaboration with various architectural practices. Brushes, gears, cables, lamps and tools in all shapes and sizes make up the backdrop of creation and become elements of another original idea. Light installations, door stoppers, cutting surfaces, hangers are only but a few of the objects one can view in their catalogue. All highly functional without lacking a humorous side while the thematic choices reflect their creator’s experiences.

Greatest example is that of the cat, Babis’ favourite animal, featuring in many of their creations. As a general rule, all items exude an earthy feeling fit to the human environment. Through their first line they offer a new and unique view to a field in need for innovation. At the same time they also keep in touch with Vitruvius’ canons of architecture: Beauty (Venustas), Strength (Firmitas) and Utility (Utilitas).For their following project, they collaborate with the Benaki Museum in creating objects inspired by the work of the great painter Nikos Hadjikyriakos-Ghika in preparation for the launch of a new gallery bearing his name beginning of October.