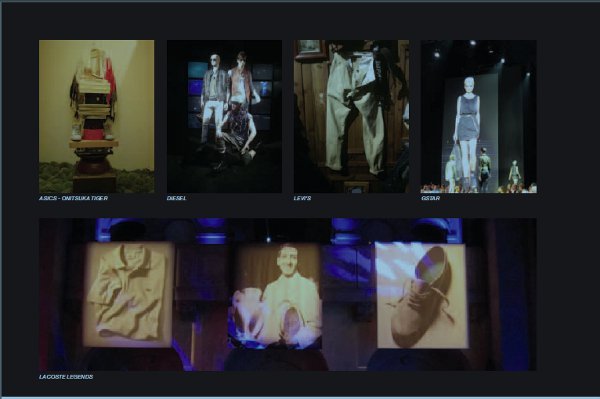 From 7 to 9th of July, OZON partcipated, once more, at the international fashion trade show Bread & Butter (BBB) in Berlin. Having its own booth, and being an exclusive collaborator of the Greek media, OZON is the one and only magazine with its headquarters in Greece, that always attends the event. OZONʼs booth friends and visitors had the opportunity to leaf through the special biannual edition of OZON International ʻThe Creative Chaos Issueʼ, that now has international distribution, and to figure at the magazineʼs cover.

First day at the exhibition at Tempelhof airport, and just seeing this yearʼs program, we wonder how many things one can see in only three days. We start with the jeans exhibition, sports and street-wear. At Leviʼs Booth, the main inspiration is ʻCalifornia dreamingʼ. Optimistic garments with candy shop colors, Leviʼs booth made us dream of going to the beach dressed in faded denim. Flowery patterns and feminine style by Fornarina, whose booth had models posing, like pin-up girls, teasing the visitors. At Miss Sixty we see a complete denim proposition and we want the moto zip model with the leather details. By the exhibitionʼs title, ʻPremiere Leagueʼ, we understand that Mundial has sneaked here too while before the second semi-final Reggae musician, Patrice Bart-Williams is performing.

We continue our dash. Dieselʼs spectacular booth is inspired from the world of motion pictures. Entrance is entirely made of stacked VHS tapes and the whole area reminds of cinematic studio. In Calvin Kleinʼs booth,jeans are combined with interesting accesories, in wooden scenery with minimal taste. What follows is the booth of Staf Jeans & Co., 170 cm long, at the level Denim Base of Bread & Butter. The new collection is mainly consisted of T-shirts, colored jeans, slim fit and baggy denims, following the brandʼs main message: ʻDo your Staffʼ.We run to catch the G-Star RAW fashion show. Big screens, loud music and the military look is on. In Ben
Shermanʼs booth we see the return of preppy look and casual chic but also presentation of a new line called
ʻmodern classicsʼ, which is inspired by sailing.

Harley Davidson presented its new collection. A wide range of T-shirts, inspired by the legendary brand.WeSC showed their debut footwear, covering a whole range from sneakers to casual.

Converse All Starʼs booth is one of the most creative, since it is completely made of all-stars in every shape and color, that makes it difficult to not daydream by just looking at the colorfull wall.Onitsuka Tiger, which has participated in both Bread & Butter and Bright, is giving us the best impressionswith its exhibition ʻFriends and Familyʼ, for which it collaborated with brands, designers and sneakers shops from all over the world.

After the semi-final between Spain and Germany, itʼs night time and there we are at the famous night-spot Stadbad. Lacoste Legends is organising a party to celebrate the collaborations with: Tim Hamilton, ato, Sebastien Tellier, Sneaker Freaker magazine, i-D magazine and others, for its new sneakers line. We spend the night between booze sneakers and we become friends with SUPER-SUPER magazineʼs team.

Back in the exhibition, our friends are being photographed holding props inspired by songs that have inspired our previous issues. Candies for ʻAll That She Wantsʼ, water-guns for ʻOops I Did It Againʼ, and a T-shirt with David Bowieʼs caricature for ʻHeroesʼ and we know that in the next seasonʼs Bread & Butter, when we will be watching the summer collection, outside it will be -20 degrees.