CHICKS ON SPEED
Slap in the face 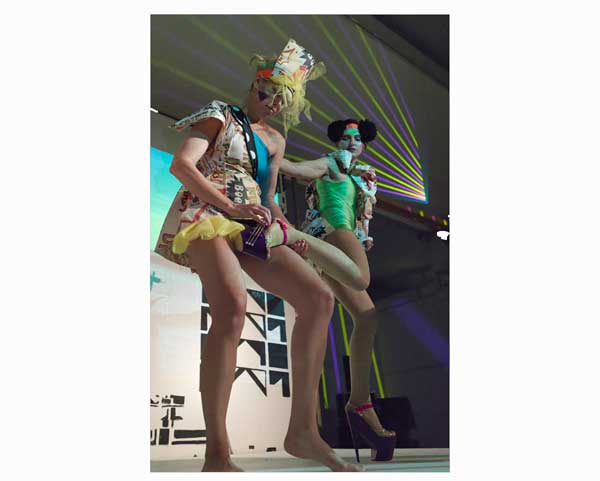 Since 1997 when they first got together they’ve been around working on different projects, experimenting, thinking, rethinking and mostly doing things sharply. They perform on stage, design clothes, sing and dance, give lectures, exhibit,make sculptures and set up installations, publish and collaborate with every kind of talented artist they can share their visions with plus they have founded an open source called ‘Copy left’ project. I ‘m definitely leaving so many things out but I think the point has been made clear. This inspired collective is kicking in heels, moving forward and it actually is a million more things than just a band. In a conversation with Alex Murray-Leslie from Chicks on Speed naturally you want to know all about the logic behind the team, the realization of their brilliant ideas and what the future holds for those chicks.

Their multifaceted activity and ever-growing creativity forms a whole world of ideas where diy logic, social criticism, feminism, freedom and cutting edge aesthetics shape the landscape. Throughout all their experimenting ventures there is a solid philosophy and behind them there is hard team work and fun. In the end, everything Chicks on Speed do comes across as coherent and makes perfect sense. “Well it is quite logical, it is like all these mediums are linked to a chain” explains Alex. “If we didn’t have the fashion, or the videos and the music, it would be just voices… so to me it’s a chain; it links fashion, art and music. They form something divine, combining mediums, it’s like anti-isolation”. That is why the ideas come naturally: “we’ve been together for so long now and we’ve been having a lot of practicing together for the concerts, we’ve been working as a cooperative group, pushing ideas forward. And it’s not only hard work, we’ve been really happy with what we’ve been doing and I think this collaboration is one that you just can’t find”. All the members are up for acting and fashionable technology, she points out, and that is how during the creative process and through “heartbreaking conditions” they explore and in order to develop they need to move on to another medium each time. Every single aspect of their work brings out an equally important and effective discussion and through a video, fashion, an installation or a public talk each idea can be realized. They do not put labels to their work –that’s what journalists usually do afterwards Alex argues- and she emphasizes : “I am not interested in a label, I am up to explore and experiment, and it’s about researching and having new air and taking on new ideas”. However there is an aspect that is currently more representative for Chicks on Speed and that is their art-projects in museums, explains Alex. “They are very representative because combining fashion and music, we’ve got our worlds in one place and they give us much freedom and we are being able to do one ambitious project and have more time to work on it”. In their museum exhibitions they have presented the most imaginative, amazing and technologically forward fashion and decorative items, their famous “objekt instruments”: an amplifier hat with a microphone implant, a suit whose sensors activate audiovisual samples, a Theremin tapestry and the fascinating high heel wireless guitar, which according to Alex is their strongest fashion statement. “It combines fashion and art, because it’s a sculpture, it’s a piece to wear that’s shocking, it’s ‘loud’ cause it makes sounds. I think for us it’s something that really embodies all of these worlds” she explains and once you see it the uniqueness of the object is undoubted. Their objects do not work as fetishes, according to Alex, they are functional tools, they serve a purpose and make great effect on stage and apparently in an exhibition space as well, concluding from the upcoming exhibition of their one of a kind shoe in MoMa. What does the future have in store for Chicks on Speed? Their genuine work will take them to perform and exhibit to Tokyo, Hong Kong, Australia, St Paolo, the V&A in London and to an all-collaborations inclusive exhibition in Berlin at the end of the year. On top of it all Alex Murray-Leslie directs the Mobile Fashion Film competition launched by Diane Pernet which will take place this summer in Barcelona and is open for entries. ‘Once you perfect something it is boring’ so it’s all about ‘prototype process’ and experimentation says at some point Alex and one cannot think boredom and Chicks on Speed being further apart.