The Future Is Now! – Margiela Delivers iPhones and VR on the Runway.

Haute Couture fashion week has been mild to say the least. If you’d been out the night before you may have not been able to stop yourself from yawning at some of the very conventional presentations. Dior, Chanel and Givenchy chose, for the majority of their looks, a ground breaking pallet of …. nudes, navys and monochrome for some kind of return to elegance.(yawn) However there was hope. Maison Margiela hadn’t shown yet. After taking over as creative director of the House in 2014, John Galliano has been constantly revamping, reinventing and reinvigorating both silhouettes and textiles. It’s only been twelve days since his gender-defying presentation at Paris Menswear and now he is sharing another 32 pieces for Fall/Winter 2018 Haute Couture in another fearless and defiant show.

Today Galliano embraced the current and the new. Where the establishment had buried its head in the sand as if the past 50 years had not happened, Galliano looked at his reality straight in the face. In a podcast released before the show, Galliano spoke of iPhones and iPads which featured as attachments worn by some of the models – a kind of squashed selfie stick anklet. I’m really hoping that they were recording and it’ll get turned into some edgy video art. Am I asking for too much? 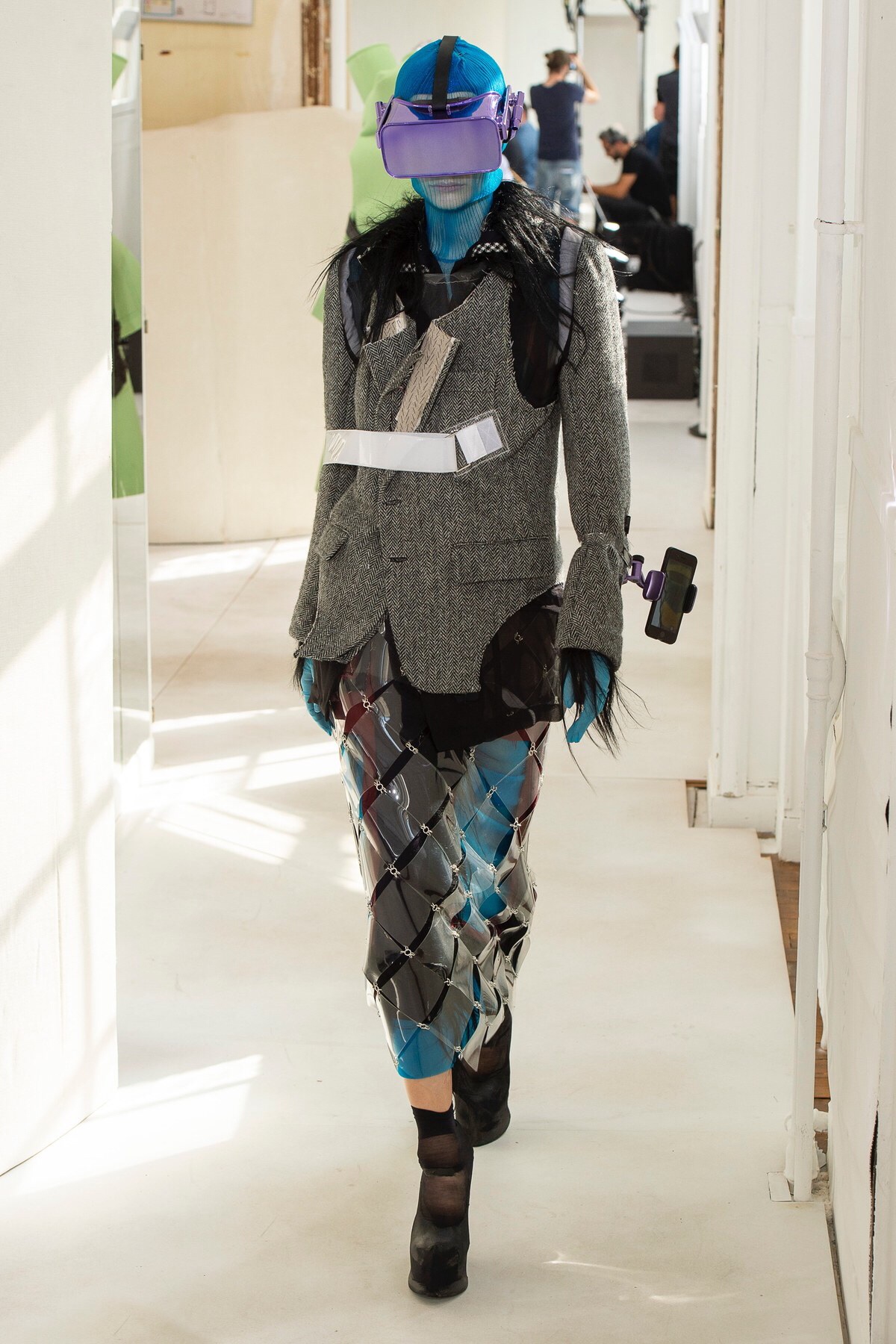 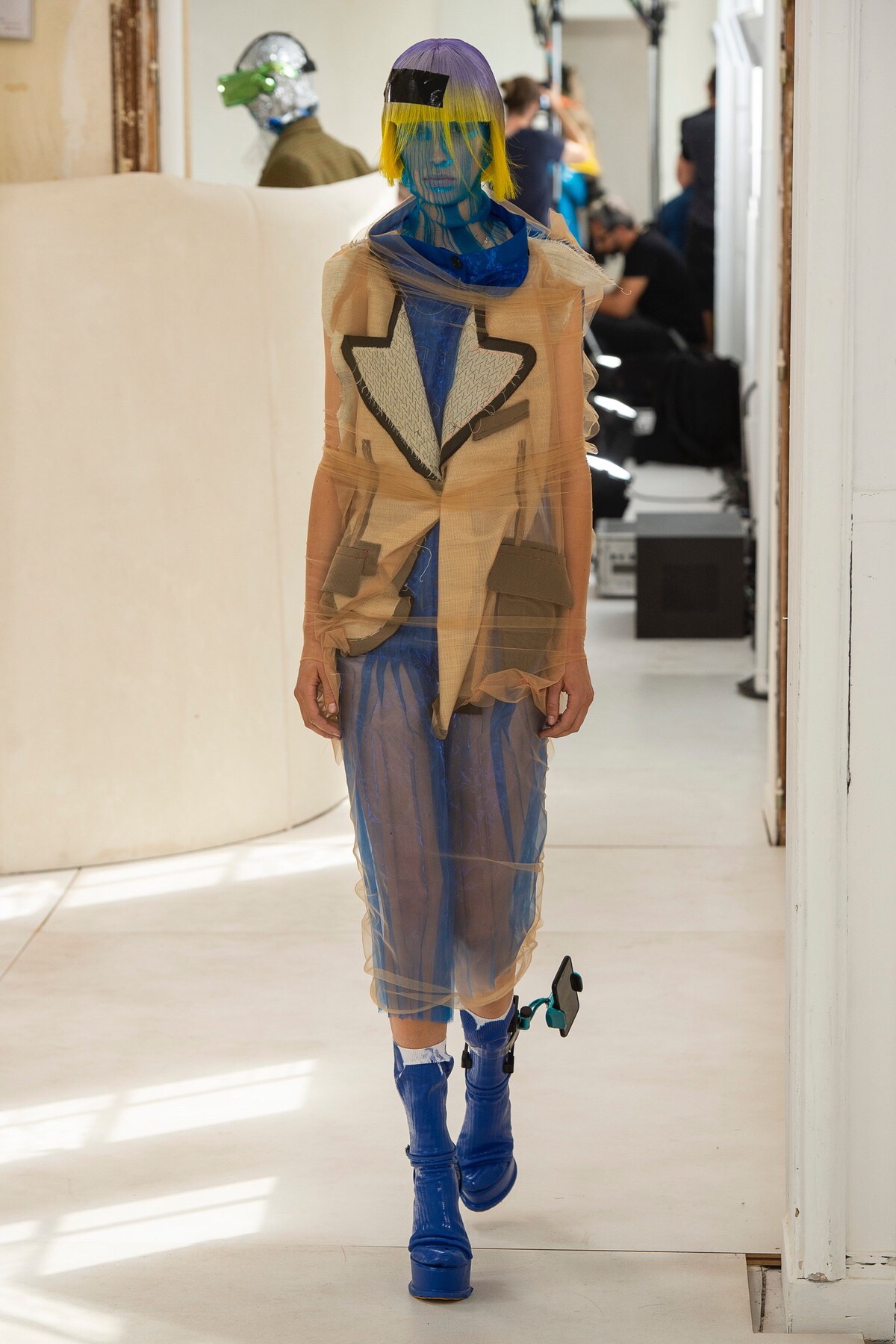 The collection is pulling in two different directions, one towards this technological future, but the other was characterised as nomadic – a harsh contrast. This juxtaposition can be summed up as a kind of nativity in our own surroundings, navigating the space of the internet but not fulling understanding our place in it. We are wondering, splintered, no longer united by anything other than electronic groups. The plastic VR-like headsets further induced this feeling of isolation on the runway. 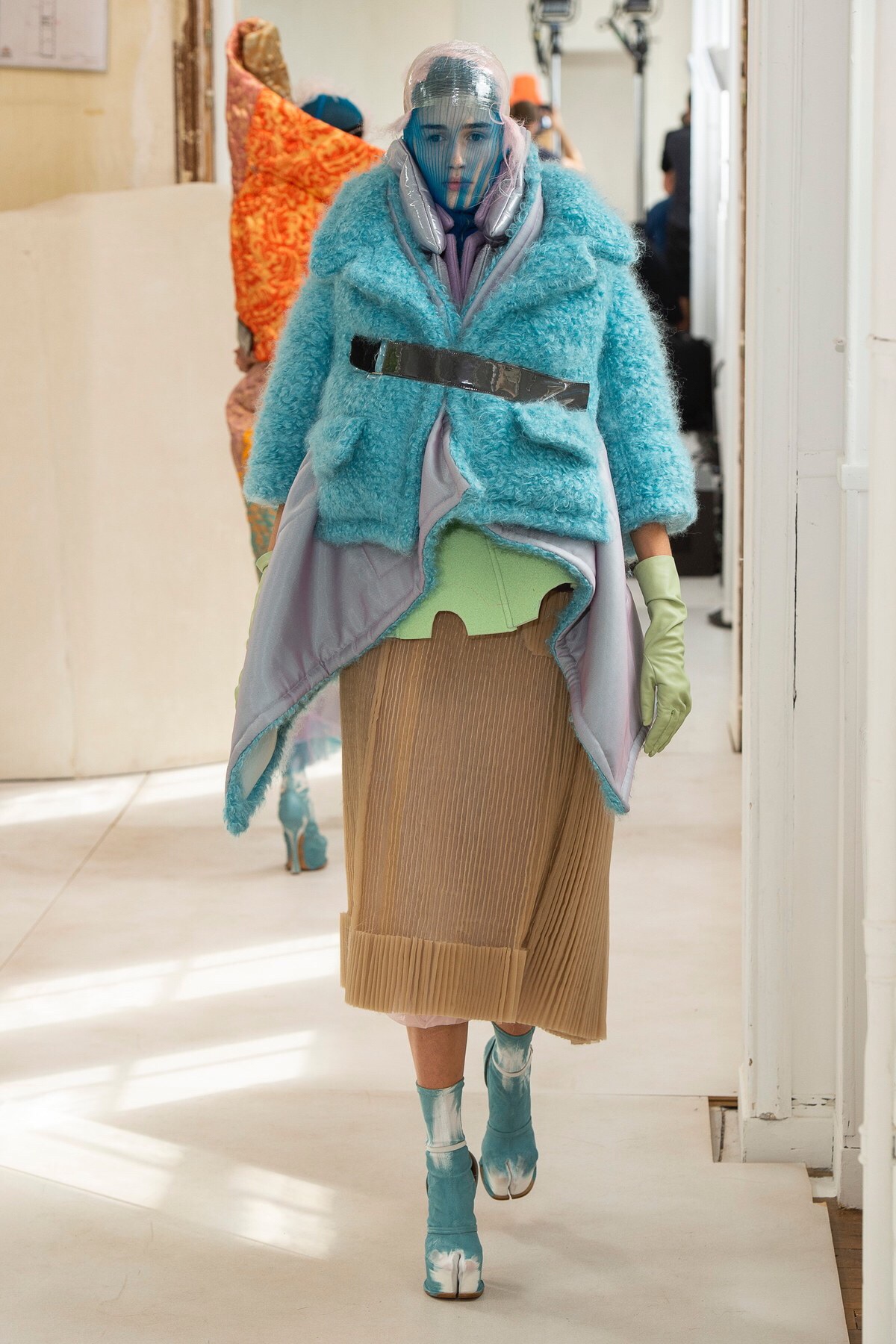 The layering of garments was about the excess of today, the uncontrollable amount of choice of clothes we could wear and the oversaturated experience of the online world reproduced in synthetic fabric. Plastic wrap or transparent vinyl gave the looks an extra, superficial layer. The artificial blues calling to mind the blue screen of death, the terrifying repercussions of technological failure. 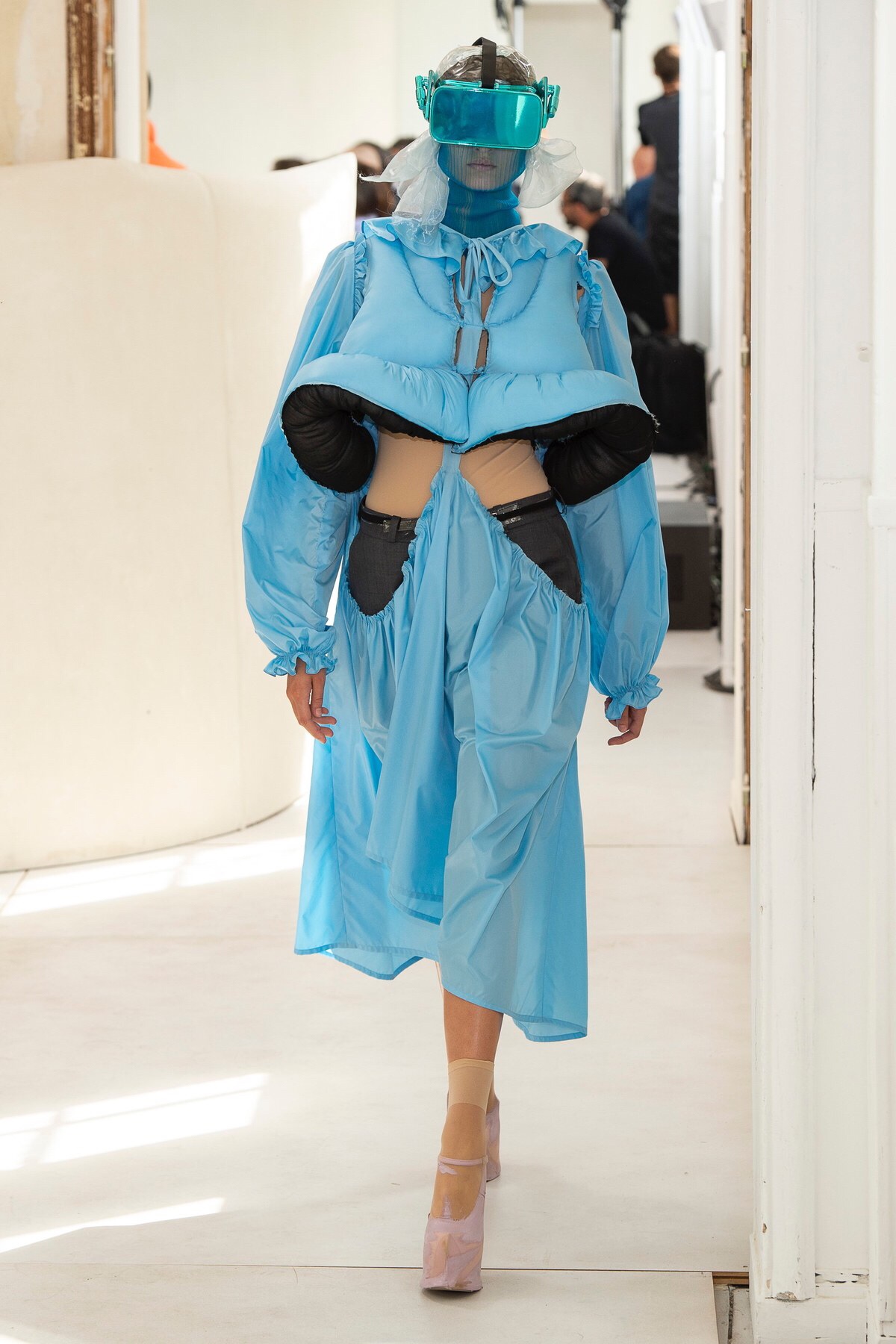 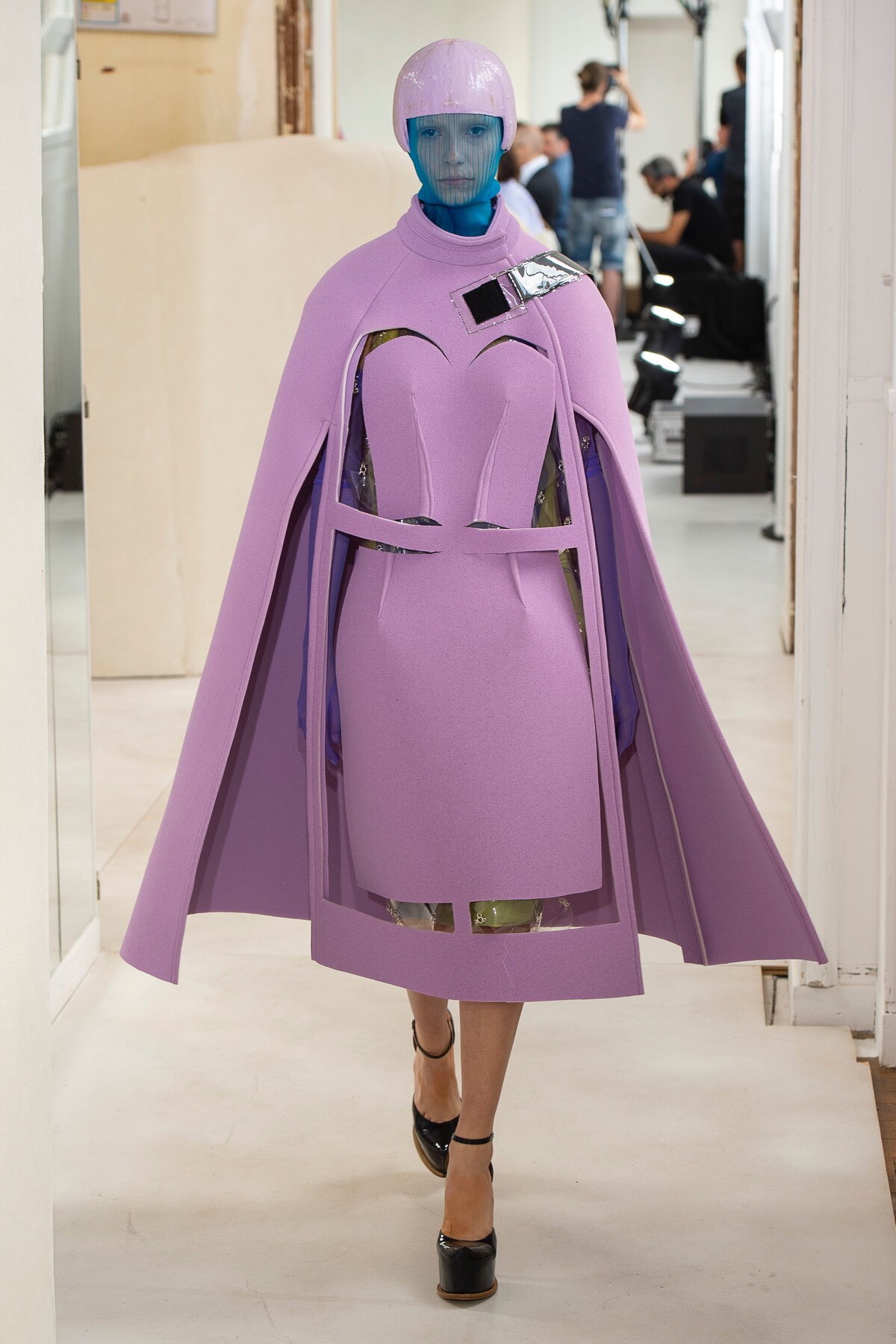 The most streamlined look was an elegant purple dress composed of a dress within a dress which was reminiscent of assembly lines and the reality of today’s mass production. Rather ironic at a haute couture week where everything is bespoke and hand made.

These pieces, sickly, artificial, oversaturated in quality and colour, spoke volumes about our contemporary experiences and are surely a bold statement for the house in its commitment to the avant-garde.