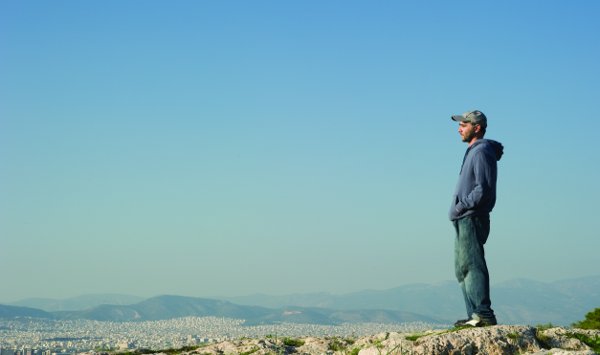 Since the 90s WHEN K.BHTA was a member of Stereo Nova up to today, he transforms thoughts, words, images and feelings into music in a magical and melodic manner. His first book entitled ‘One morning you will cross the world’ constitutes a special fusion of lyrics, poems, notes, photos, unpublished drawings from K.BHTA’s trip on earth.

-Is there something you miss from the time you begun as a member of Stereo Nova and how far has the Greek electronic music scene changed since then?

There is nothing I miss. I’ve always thought when something ends, something new lies ahead. It’s nice to try and place yourself on a different side, to live whatever it is that time brings, be ready to accept the new thing and change. I like changes because this is how we learn. During the course of my life I experienced things I might had missed if I had stayed with Stereo Nova; everything comes at the right time in life. As far as Greek scene is concerned, I can certainly see its change, becoming more diverse with young people emerging and new waves appearing. The internet is largely responsible for the speed of change as well as creating both virtues and vices.

-Manos Hadzidakis once said that his songs were there to fill the gaps of his personal life, not for entertaining. What are your reasons for writing music?

When I write I think of none, no image of people, supposedly listening to my music, exists in my head. Composing is like a parallel life throughout the course of many years. It’s like a door into what has somehow managed to filter through me. It’s like wanting to come close to the truth, even via noise, darkness or light. Writing is like the face of consciousness growing inside me. It is how I approach things and then of course there is the aesthetic part, the synthesis, forms, all later stages. There are too many levels to writing and synthesis but one cannot realise it while it happens. Right now we are trying to put words to it, to describe it but believe me, it is something no artist can describe. It surely is just a moment, a unique moment.

-What’s your relationship with art?

Apart from studying it, art is not my main focus. Sometimes I get into it on my spare time, painting like a maniac with my favourites oils and crayons. I miss painting but now I make my living out of my first love; music. Taking photos with an old analogue camera and then printing them is something I enjoy doing when colours are not around. Digital is cool but nothing compares to film. I try to stay up to date to what is happening in the contemporary art scene and I keep on discovering great artists.
Apart from free music downloading that has clearly redefined the public-record label relationship, do you think the internet has an influence on music production process?
The internet is the ultimate instrument, it began like a game in the ’90s to end up becoming the fundamental medium of the masses. It reached a point where you can access the world only via it. It’s a system without rules and perhaps this is its most vulnerable point as it might take a different turn when in hands of young children, it could bring them close to violence and life’s cruelty. It easily creates stereotypes and has its own unique way of making you one of the establishment. At the same time it’s fast and communicative and removes all boundaries, as well as certain vocations; it’s the planet’s life. It certainly changed the world creating new needs and inevitably affecting the arts. That’s the internet and we have to live with it. Time will only tell the process of man’s creations.

-What is it that you love about Athens and if you had the chance, what would you change to its people and the way they communicate?

I am learning to love it everyday, I let go, allowing the city to influence me so that new questions and images arise. Everyday life is our reality and this is reflected in the city. Everyone affects and changes things around them and all together we make a composition. Everything is made of human elements fed in the city.
Your book is a collection of lyrics, photographs, personal notes, sketches, poems. How far back does this material date and why have you chosen this particular moment to publish it?
I was often proposed by publishers to bring all songs into a book but, as I believe there is a right time to everything, that was never a priority. All material was scattered here and there and for many years now, both friends and music fans would encourage me to do it. The songs were not meant to become a book, they come from a world of music and when combined together they create an image out of thousand separate images. In the end they seem like images of people; like a diary full of dreams, truth, unfinished sentences and phrases, meanings that were born out of the shadows, contrasts and people who were unable to accommodate love and vice versa.

-Tell us about your forthcoming work. When is it coming out?

It will be out before Christmas. It is an electronic project where my music is hosted without my name. An underground label will release it and it’s almost ready so you’ll know about it soon as I cannot say any more now. I wanted to break free from K.Bhta and do something new.