Gianluca Fallone – Hero In The Making 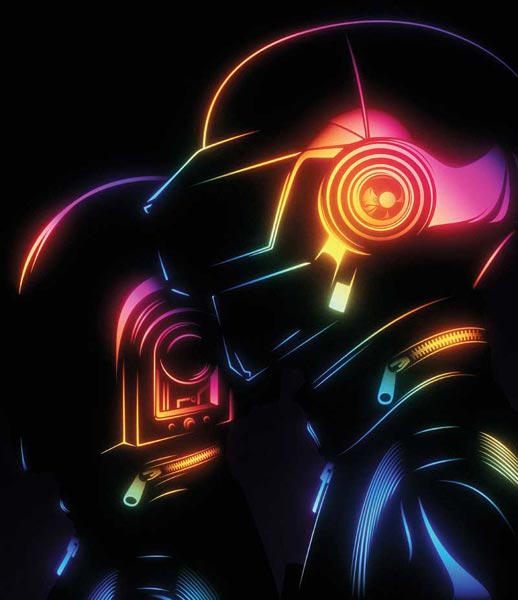 At only 25 years of age, the Argentinian graphic designer Gianluca Fallone has managed to build up an impressive portfolio of work with super-brands such as MTV, Nike, Microsoft, Discovery and Cartoon Network as well as music groups such as Daft Punk.

What made you choose London as base?
I think I feel more related to European culture than American. I had a job offer in San Francisco but I turned it down because United States is not a country I would really like to live in. I love US for taking holidays, but I couldn’t live there for more than a month. On the other hand, London is amazing, it is just my kind of thing and you have everything near you; Paris, Berlin and some other crazy cities.

Do you think graphic design has entered a phase where it has become too hyped and needs to go back to the basics, become more simple?
I think people should do what they feel, if they feel inspired by new shit or trends, then that’s what they should do. Simple or complex? If it has a reason, then it is fine with me. I usually prefer simple, but that’s just me.

How would you explain your ‘illustration -design rollercoaster’? Is Japanese animation and manga you main influences?
I don’t think Japanese animation and manga are my main influences, but that’s what people say. Actually my main inspiration comes from music or people that I meet along the way. Going to a gig, visiting some friends, clubbing or just playing games, watching films is my thing, and everything I do comes from that.

Do you think that the main design ‘trend’ right now is a mixture of eastern and western style?
I really don’t know what is the main design trend. To be honest I don’t read design blogs or magazines, my newspaper is mainly posters on the street and what people wear. Anyway mixing styles always has something interesting into it, but again, it always depends on how you do it.

Do you think prints and illustrations have been heavily promoted as the new ‘it’ artworks, or is it just a natural progression?
I don’t know what you mean, but yes, I think there is a lot of print offer. Everyone is selling prints everywhere, and 90% is shit, nothing personal, but I feel that every illustration someone does, goes from saving the file to uploading and selling. No second thoughts no second opinions. It feels like a virus, like abuse of tagging, it’s free to put out there, so they do it. My conclusion? It’s fucking pollution. I don’t sell prints and I never will, the only persons that have prints of my work are my closest friends and Daft Punk.

Which artist has or still inspires you ?
I think my two previous bosses have inspired me a lot, and they still do. Tomás Dieguez from Punga and Roy Garcia from Rock Instrument Bureau. I can also tell you that I admire any artist with a vision, like Non Format.

What is beautiful to you ? In terms of design, fashion , aesthetic in general.
Beautiful? What Gisela Filc does in photography is beautiful. What Non Format does in design is beautiful. A female body, a pretty face, a good soundtrack and many other things I consider to be beautiful. Talking to Tanja Brockmeyer is beautiful.

What are you working on right now? Any plans for a future exhibition?
I just finished working on a music video for Gabriella Cilmi. The promo was co-directed by Michael Gracey, he directed the live action and I did all the FX direction (green screen, backgrounds, design) It’s a sci-fi 80s aesthetic video and it will be released on January 2010 if I’m not mistaken. It was great to work with Michael, I really admire him and his view on things it’s just mind blowing. I did an exhibition last year in Buenos Aires and I really don’t have anything planned for the future. I feel that if I ever do an exhibition again I will need a real budget, cause what I have in mind is too ambitious for a 20 square meter gallery.