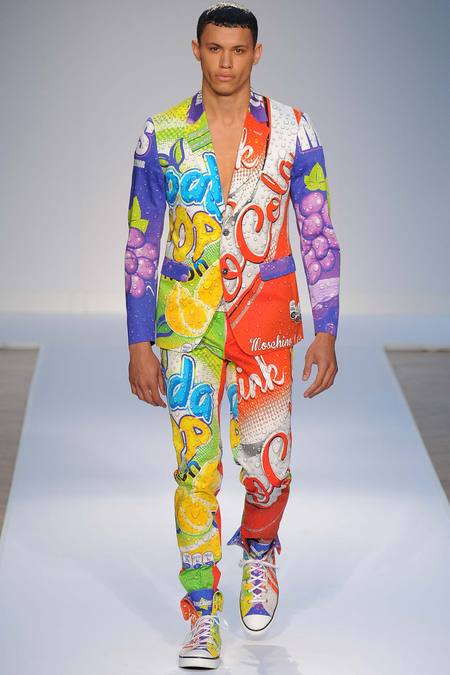 Moschino must have found the perfect designer and that’s Jeremy Scott. He does not think much of conceptual approaches, but he is playing while creating -or vice versa. He is turning his back to the more “serious” ones, and he is doing what Franco Moschino did back to the 80s. Moreover, despite the panic of one’s need to differentiate both from his peers and himself, the acclaimed designer remains loyal to his identity, which he refuses stubbornly to alter.

For his first collection for the house, he bombed the audience with pop culture icons, from McDonald’s to Nickelodeon’s Spongebob. For the Spring/Summer 2015 menswear collection, he used many of the motifs-brands, that have already been presented for the resort womenswear collection as well, not a long time ago. Refreshment logos, the 2.55 Chanel bag, thef Hermès and Louis Vuitton badges, even the Moschino one, national flags, 1$ signs -as an ironic “luxury” icon- are meddling and are creating a variety of garments in different shapes, as if they are taking part in an (anti)advertising party.

Yet, Scott is fleering this world. He is exploiting it, because he is a young child, that wants to joke. He is deriding a system, which offers him the grounds to act. He reminds that the witty slogan T-shirts, like the “Céline me alone” and “Homiès” were initially presented by Moschino. Fashion should not be as strict as some wish it were. And all this happens, while he is a part of this industry and at the -up to now- peak of his career. Could he be more of a thinker, despite what he thinks of himself? Could he be more conceptual than the declared conceptuals?