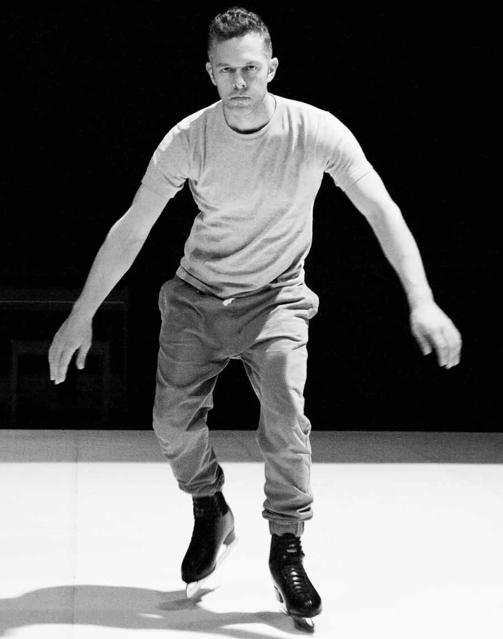 It’s safe to say that Christos Loulis has spent a fair amount of time on stage, grappling with some truly complex characters, so it’s no wonder that he is considered one of the best stage actors of his generation. “The truth of the matter is I’m part of the “special forces”unit of the theatre”, he tells OZON RAW lightheartedly, as he prepares for his role as Death, in Jon Fosse’s “Death variations”, showing (by the time you read these lines) at the Poreia theatre, directed by Giannis Houvardas.

Fosse places death at the center of his story, though he really speaks about love. How are these two connect- ed in the play? Like most dissimilar things are connected. Just as death is a refusal of life, so is love its ultimate song of praise. All religions, especially Christianity emphasize this. Only through love can you overcome death. Only through its most complete form, which embraces death as a natural part of life itself.

You’re an actor who has been tested through some very demanding parts. This is another one of those. How does it feel to be portraying Death and how is that present- ed on the stage of the Poreia theatre?
I think it’s a rather more grounded experience that what we expected. In the play, Death is not someone transcendental, but rather an individual who knows nothing of life, even though he is part of it. In our play he is named “the friend”, because that is how he enters the daughter’s life, as the friend, with no threat or scare. As someone who could be saying: you will end up with me in the end, but it would be better for everyone involved if you did not fear me, or better yet, if you could decide to love me. Not because you don’t love life, but because if you learn to love me, you will enjoy the years that you have to live far more.

Also, how is it to be playing Death on an ice rink?
Like I said, I’m officially a member of the theatre “special forces”. I knew nothing about ice skating before starting rehearsals, but I followed a strict regime of daily lessons and I can now skate and say my lines at the same time. It’s a real release for me to be able to start off a role with an athletic-physical challenge. It feeds my imagination. You’ve worked with Giannis Houvardas on many plays, so you surely must have developed a common code of communication and trust by now. How did it help you get in to your part? He focused more on the human element of the character and protected me from the pitfalls.

You also play a variety of roles in your personal life, both as a husband and most recently, a father. Is there any room left for personal space, a place where you can escape to and still feel like a child?
Thankfully my job is not really a job. I can be a kid every day and make a living from it. I can’t exactly separate my day between play and work. Even when I’m playing with my son, although I enjoy it, I still look at it as my duty.

If you had to describe love with a single stare, what would that be?
The way my son looks at his mother. Because he too, does fully realize that what he feels is love.