We all know who Grace Jones is. We also know, that her biography (in cooperation with Paul Morley) will be soon published. But what’s inside that book, is not just details and how Jones remembers her life. Time Out has revealed an extract of her upcoming book, which looks really interesting.

In this part, Jones talks about copycats, the music stars of the day and how she fought for her own fame. “I think people assume that’s where I want to be, famous for being famous, because as part of what I do there is a high level of showing off. But my instinct is always to resist the pull of the obvious. It’s not easy”.

She wants everyone to know that all the singers everyone is admiring nowadays, are her copycats. They are trends. “Trends come along and people say, ‘Follow that trend’. There’s a lot of that around at the moment: ‘Be like Sasha Fierce. Be like Miley Cyrus. Be like Rihanna. Be like Lady Gaga. Be like Rita Ora and Sia. Be like Madonna.’ I cannot be like them – except to the extent that they are already being like me”. 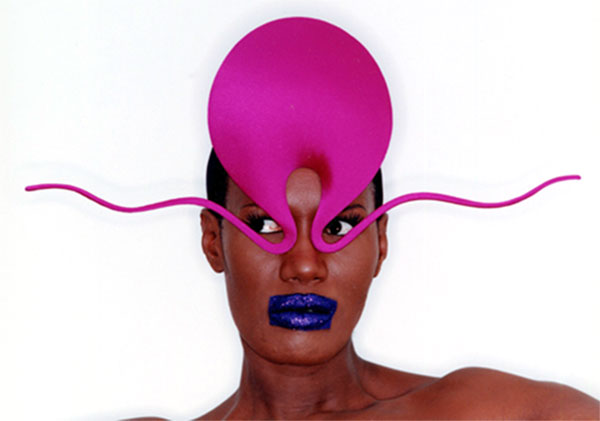 As for Rihanna, she finds her copying skills, not good enough, since she is missing -according to her- basic knowledge of Jones’ history. “Rihanna… she does the body-painting thing I did with Keith Haring, but where he painted directly on my body, she wears a painted bodysuit. That’s the difference. Mine is on skin; she puts a barrier between the paint and her skin. I don’t even know if she knows that what she’s doing comes from me, but I bet you the people styling her know. They know the history”.

And there is Doris, as she calls one of her copycats. The later one wanted to work with Jones, but she denied. “Everyone around me is going: ‘You have to do it, it will be so good for you, it will introduce you to a whole new audience, you will make a lot of money’. No! It will be good for her; she will draw from everything I have built and add it to her brand, and I will get nothing back except for a little temporary attention. […] she’s a baby in a closet full of other people’s clothes, a little girl playing dress-up, putting on shoes that don’t fit. I could see what she wanted to be when I watched her doing something when she started out that was starker and purer. […] Does she look happy? She looks lost, like she is desperately trying to find the person she was when she started. […] when she started to dance like Madonna, almost immediately, copying someone else, it was like she had forgotten what it was about her that could be unique. Ultimately, it is all about prettiness and comfort, however much they pretend they are being provocative”.

She does not like to think of herself as a diva, though. She is still herself, after all these years. “Kate Moss often says to me that I am the only performer around at the moment who deserves to be called a diva. That gets us arguing, seemingly a little too serious if anyone hears us. I hate that word diva. It’s been so abused! Every singer given a makeover or a few weeks on a talent show seems to be called a diva these days! Christ almighty. Where’s the exclusivity? It’s so commercial now. And of course the word is usually used to describe an apparently erratic female whose temperamental qualities, survival instincts, and dedication to perfection are seen as weaknesses, as self-indulgent, not a strength. So, Kate, I am not a diva. I am a Jones!”.

And finally, she wants to give advice to all those aspiring Grace Jones’s and singers, as well. And her only advice is that every performer should be themselves, like she was. Nothing was fake. Nothing is still fake. So all her pupils should follow that advice, since this is the only way to be unique. “Υou have become only your fame, and left behind most of who you were. How are you going to deal with that? Will you lose that person forever? Have you become someone else, without really knowing it? Do you always have to stay in character for people to like you? Do you know that you are in character?

Doris, I would say fame is all well and good if you want to take it to another level. […] Listen to my advice; I have some experience. In a way, it is me being a teacher, which is what I wanted to be. I still feel I could go into teaching. What is teaching but passing on your knowledge to those who are at the beginning? Some people are born with that gift. With me, the teaching side morphed into the performing side. It’s in there. And these are my pupils – Gaga, Madonna, Annie Lennox, Katy Perry, Rihanna, Miley, Kanye West, FKA Twigs and… Doris”.