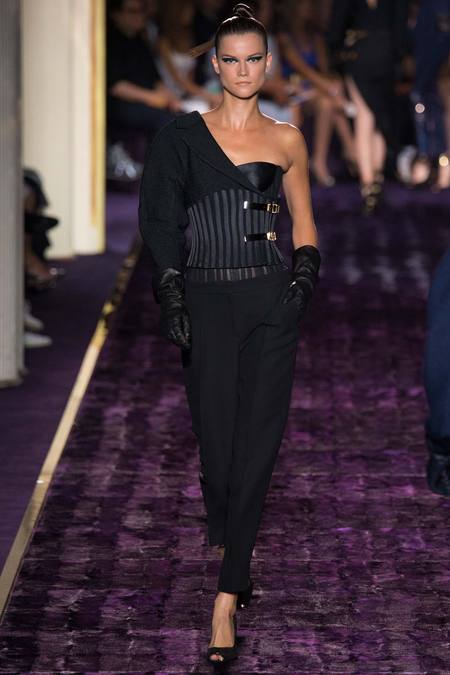 Donatella Versace has been experimenting lately. Not with her audience, but with her references. And from Lady Gaga and Grace Jones or the 90s grunge of previous collections, she moved to even older eras. To the 50s, as an influence of MET’s exhibition of American couturier, Charles James. “I was amazed by the exhibition and inspired by the expression he found in fabric. It led me to think about new volumes, but through the eyes of Versace”.

And as a matter of fact, there were times that 50s volumes and shapes were alive in the looks. There were also times you had to search them, either because futuristic strokes would win the prototype, or because the Versace element had inserted more that it should have done. Maybe, the house identity is not completely compatible to how this decade wanted to transmit its message. However, it was Donatella herself calling her collection “Hot Couture”. The element of sexiness, part of the Versace house, was by no means really common back then. But this is the challenge for every designer; to reinterprete their references, to create through them and not to lose their identity. And in this part, regardless if someone agrees or not with the Versace aesthetics, Donatella knows how to make it.

But the house aesthetics and DNA are so specific, that after the first looks, the structure of which was quite strong, the collection started following a different direction. It would approach the Thierry Mugler 80s with the fringes or the more staring textiles, it started resembling increasingly to the designer and her experimental mood had completed its circle, returning to its starting point. To who the designer really is, what she wants to tell through her work, who she wants to address. And finally, to what she called deconstruction.

However, it was not the deconstruction that Kawakubo practices, or even the one Jean-Paul Gaultier used to do. It’s a deconstruction, exercised on the body, aiming to its revealing. She did not construct by deconstructing, but by removing fabric aspiring to a modernized haute couture. The half trousers-half shorts garments were another way of exposing the body -an essential element for a Versace show- and of defying symmetry. Exactly the same was done by the more voluminous dresses of the finale. They all unfolded at the same time, the really impressive sartorial techiniques of Atelier Versace. Because -despite the new ideas and the temper of exploring and challenging the haute couture boundaries-, the standard an haute couture fashion house should have is training, which was profound yesterday; froom the Swarovski sewn bodices to the coexistence of structures with different needs.

The biggest difficulty though, was the coexistence of Donatella Versace with the 50s. It was the latter that conformed to the designer, and not the other way round. It was not a just exchange. Since the 50s offered the raw material to present a new side of Atelier Versace, more structured this time and did not get a lucid answer to the query of their potentional evolution. The points where Donatella would segregate from her inspiration source were conspicuous. Besides, she said so. “I am Versace. I have to show it to the world”.