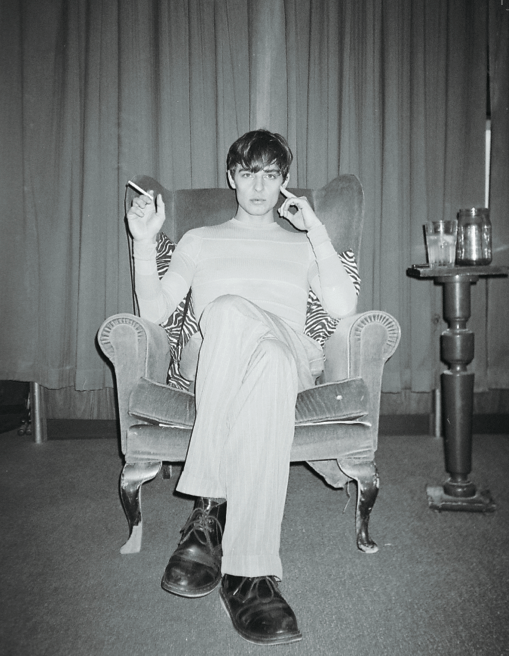 His clothes could be found next to the definition of sexy, provocative and extremely revealing. Born in Derbyshire, England, he studied menswear at the London College of Fashion, though he decided to design for women. He embraces his dark side, he seeks the corruption. His name is Simon Preen.

Do you see fashion, as a form of art?

Fashion is what you make out of It. For some it is art. For me it is my chosen creative output. I don’t like to put what I do on such a pedestal for I don’t like to over-think it too much. I’m still trying to feel fully grounded within in my own processes, while I’ve slowly come to realize that it is not a good idea for me just to plan a collection or even have a theme. Whenever I have tried to do so I become confused and unproductive and ultimately grind to a halt. It has been suggested that I may have OCD but I’ve never had it confirmed. So I just let myself go straight away on patterns, I hate to draw anything beforehand. I don’t make sketches, for my patterns are my sketches. I LOVE drawing up patterns -I find my own way of drawing them really beautiful in flat form- in fact if there were any art in what I do, I’d say it lies within them. I try to document them as well as I can, so one day I can do something with them, I don’t know what!

What excites you the most, while conceiving-creating an outfit?

The whole process of a new sample from pattern to body is my favorite thing of all, because as I said before I don’t plan too much and I never know how things are going to manifest really. I just long for the day when that is the only part of the process I have to do. I am not a business man nor my brain function in that way at all but eventually it will happen and that’s when I should really come into my own as a designer.

If you weren’t a designer, what would you be?

One of my favorite early memories was at school being asked as a class to draw a picture of ourselves in a job we would like to do when we grew up and I don’t remember exactly how much thought I put into it but I decided I would like to be a waitress on roller-skates, I even drew myself as a girl with a long blonde pony-tail, I guess because I really loved roller-skating. When I was a kid, I don’t remember if I was ever questioned on this but I really like that memory. In all seriousness though, I’ve always been creative as a person and I doubt I could ever have achieved anything outside of a creative industry so some other medium within art or my other big passion music. I’ve always considered myself a bit of a frustrated musician and I won’t be fulfilled in life unless at some point I manage to record an album or at least one track.

If you were given the opportunity to work with a brand or a designer, who would that be?

I’m not sure I would like to work with anyone else in a totally collaborative way at present because I’m such an introvert as a designer and I have my own strange way of doing things. I would certainly be happy to design a capsule collection for another brand. I have lots of great print ideas all the time. I used to do one print for each collection, as I did with Urban Outfitters which I gave to them and they would have produced for me so at some point I would like to produce an entire print collection either for myself or another store. Aside from clothing it would be a dream of mine to design a collection of shoes. I’m quite loyal myself to Dr Martens and I think that the aesthetic of my clothes would translate really well into a shoe/boot collection for them and work well altogether as an entire look.

If your clothes were songs, which would they be?

My dream song – PJ Harvey’s ‘The Faster I Breathe The Further I Go’ with an encore of Siouxsie & The Banshees ‘Lunar Camel’, pure perfection.