VETEMENTS S/S 2019 – Somber Tribute to War or Romanticisation of Violence?

After some brief rumours of financial failings (published in Highsnobiety) back in April, it has been made clear Vetements is still a powerful force in fashion. Their latest runway show took place at the start of Paris Haut couture week, avoiding the already saturated Men’s fashion week. Located a under a bridge in the Périphérique district in Paris where many displaced refugees from the Middle East and Africa have set up camps by the roadside. The show was a personal exploration of Demna Gvasalia’s personal experience of fleeing war during the genocide of Georgians in Abkhazia, a conflict not widely known about in the West. The location was supposed to bring attention to the atrocities of war. However, doesn’t this sit a little bit uncomfortably with you?

The company is know for selling very ordinary clothes for extraordinary prices. Guram Gvasalia, the business manager of the brand, is quoted to have said the company is now worth a seven digit figure. The brand has received criticism in the past for its lack of diverse casting and it has never been a particularly political company despite having a very “cool” image. Now they send a few models of colour down the run way and the fashion press is okay with them selling balaclavas for hundreds of pounds. It doesn’t quite add up, does it? 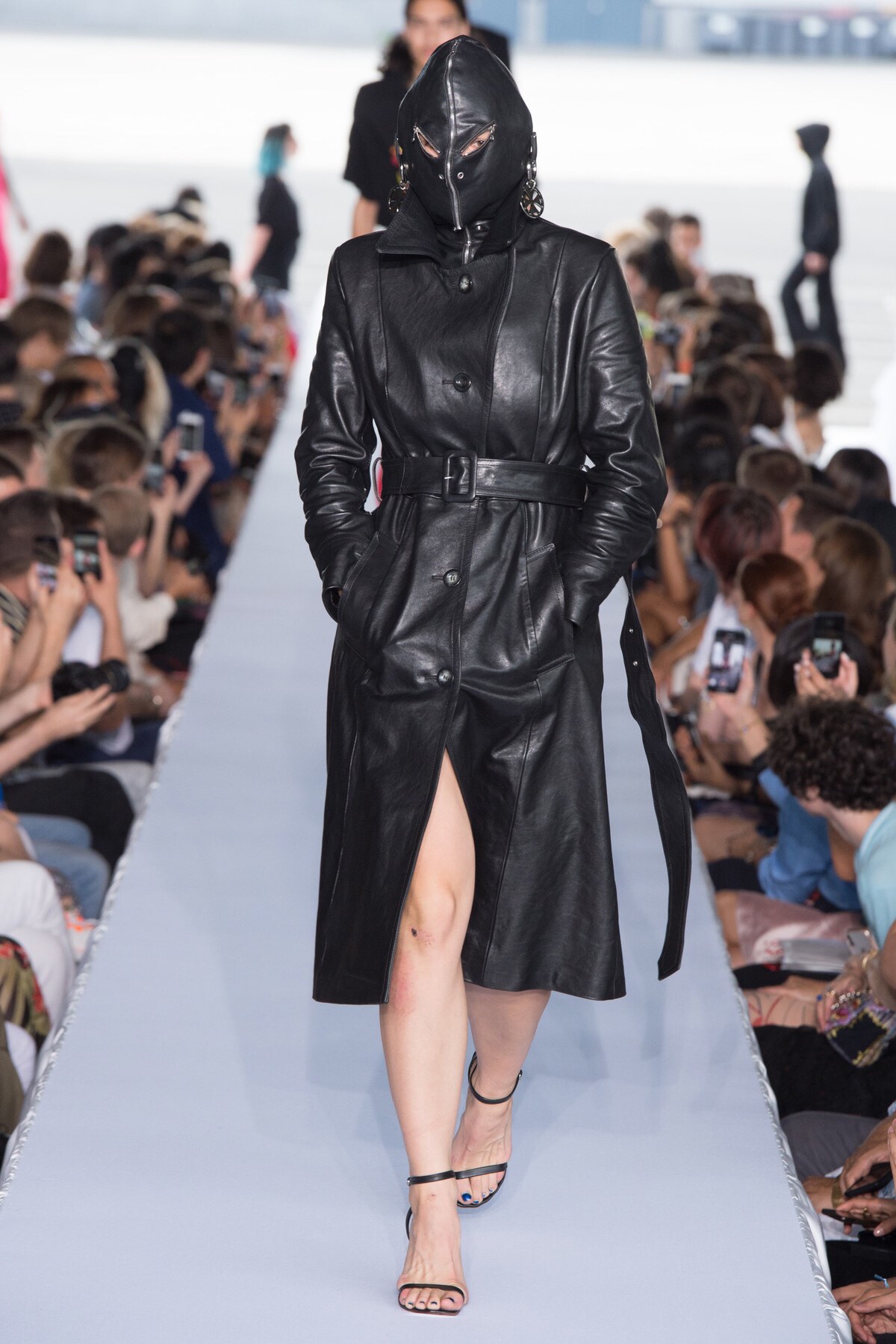 Understandably, the injustice Gvasalia himself faced are completely incomprehensible to the privileged audience watching the show (including myself). The cathartic process of making, expressing and translating these horrors can only be described as subtly and expertly achieved with war symbolised as a leather bound model wearing a fetish mask amongst the norm-core attire of the common citizen, wearing tracksuits and jeans mixed with the trade mark boxy shoulder and leather jackets. Throughout the show there were flashes of Georgian nationalism, slogans in Georgian and Russian alongside American flag motifs. All these references contributing to a multilayered criticism of nationalist ideologies of the past and present. 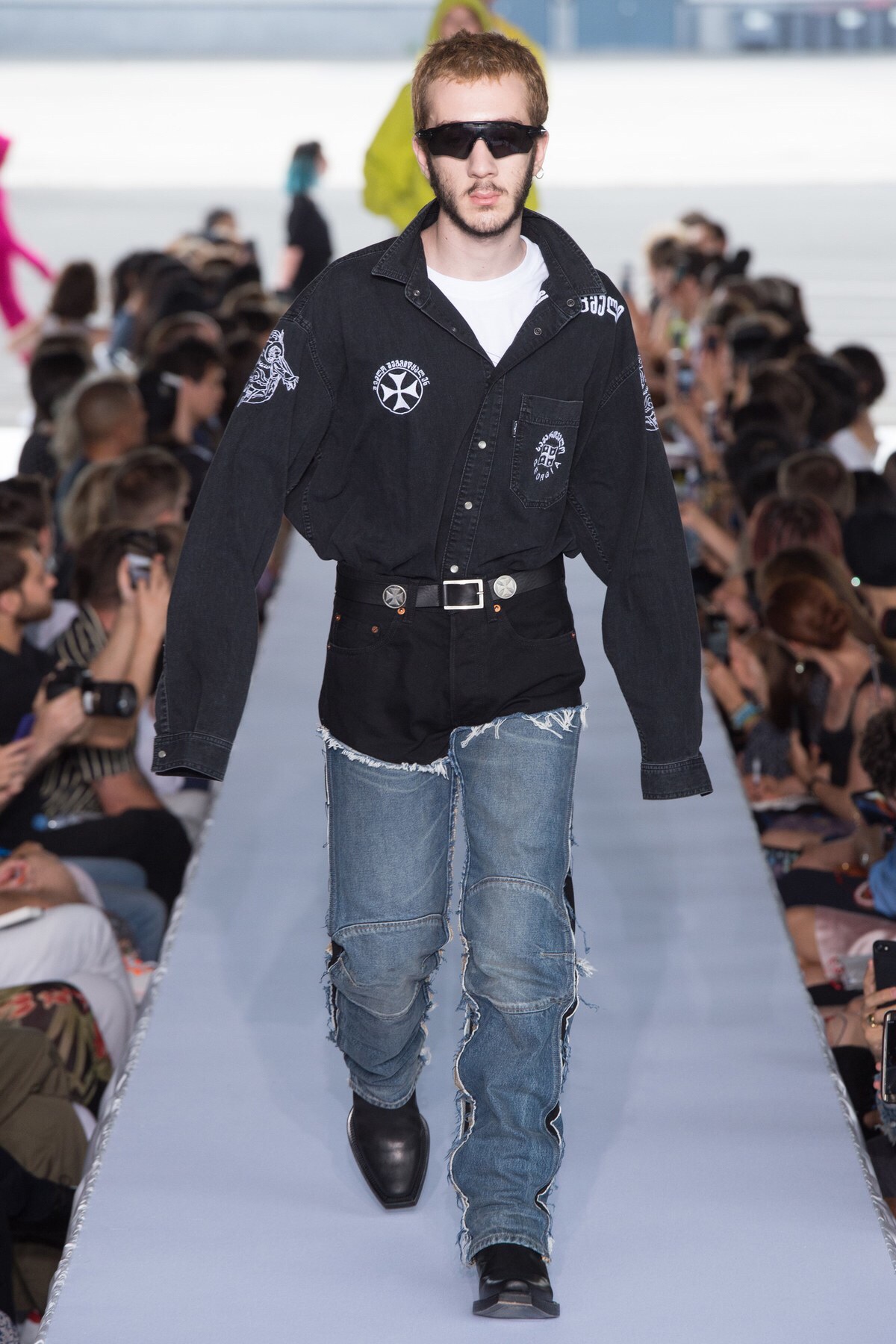 Nevertheless, there are two possible problems here: Vetements is now going to profit from the aesthetic of a war and nationalist movement that killed thousands of people and they did it using a refugee camp as a back drop. Does reducing the conflict into clothes somehow offer a remedy to the pain? Does it trivialise the act of war? Despite being beautiful and moving in isolation, does this mean it’s okay to ignore the fact they purposefully staged a show in a deprived area, used it as a setting and the destitute as props?

When questioned by Sarah Mower, if this was “insensitive irony” or drawing attention to the issue, the designer responded “I feel everybody today talks about war, refugees. And I am like, yes, I know exactly what that means…This is about my life, but also it’s about everything you see on CNN, as well.” Gvasalia is welcome to draw upon his own history to illustrate a personal narrative but I think it is a stretch to say this collection is representative of ‘what you see on CNN’ and the current refugees crisis.

Vetements have never been shy of controversy and their nonchalant attitude isn’t likely to change anytime soon. Regardless of redundant and possibly offensive references to the refugee crisis, this collection has numerous pieces that will be snapped up by buyers across the globe. It is really only the consumers who have the final say about whether they condone this approach to design.