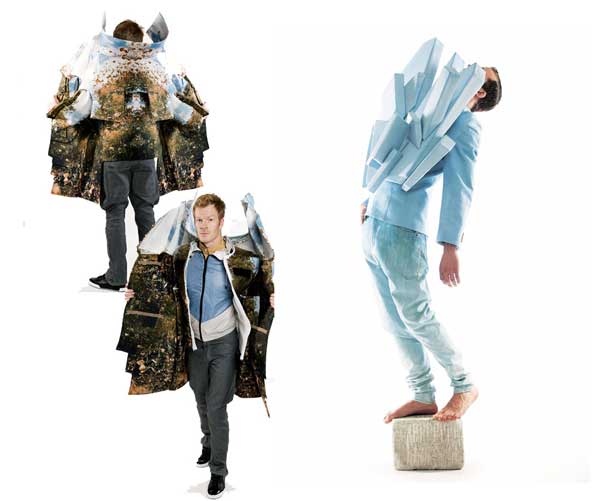 Michael Kampe, graduate of Royal Academy of Fine Arts, Antwerpen and winner of ITS#9 Awards 2010 will present a live installation based on pieces taken from ‘Exploded View’ Collection, on March 28th at Beton7 for the opening of 4FASHIONSHAKEDAYS

Michael Kampe started from being passionate for painting and inspired by Berlin’s Street art scene to turn himself into a radically upcoming new designer. Following his graduation from the prestigious Antwerp Royal Academy of Fine Arts Fashion School, his ‘Exploded Views’ Collection won the Trieste ITS#9 Diesel Award together with the attention of Diesel’s Renzo Rosso and Viktor&Rolf.

The paintings of Hieronymous Bosch and pieces by M.C. Escher, these games of color and perspective transformed into a challenge for Michael Kampe. He set as a goal to make 2D creations become alive in 3D. From loving the art of painting and having absolute no technical sewing knowledge he landed to the demanding and competitive filed of the highly exclusive Fashion School of Antwerp. Thanks to his hard work and to his talented teachers’ guidance he managed to acquire impressive fabric treatment techniques that would transform a painter’s imagination into wearable clothes-pieces of art. The idea behind Michael Kampe’s creations is a constant deconstruction and reconstruction; in his designs he re approaches and plays with a garment’s compositional elements: color, print, shape, textile. ‘My goal is to create a different point of view on clothes and the way they are composed. Especially in menswear there are so many rules that I respect but at the same time I want to innovate, to open people’s eyes to new alternatives in fashion, hopefully make them question their persistence with standards’.