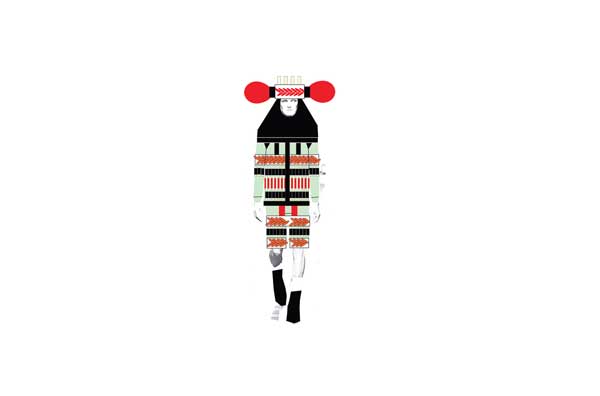 ATOPOS CVC, is a non-profit Cultural Organization founded in 2003 and based in Athens, Greece. Its aim is to implement innovative projects of contemporary visual culture, with particular emphasis on the human figure and costume.

Βritish designer, Craig Green (1986) recently graduated from Central Saint Martins, London. He has worked for important designers like Walter Van Beirendonck, Henrik Vibskov and James Long. Green generally designs his creations for a fantasy character, whilst still trying to introduce an almost sportswear element. Seeing fashion as a form of escapism, Green focuses on boyhood fantasy and adventure. Green recently won the New Era’s 90th anniversary invitation for experimentation on their most recognizable item, the baseball cap. Craig Green is also participating in ATOPOS’ upcoming publication titled NOT A TOY. Fashioning Radical Characters that will be published by PICTOPLASMA Publishing, Berlin in May 2011. Green is also one of the emerging fashion designers whose work will be presented at the ARRRGH! Monsters in Fashion exhibition organised by ATOPOS CVC at the Benaki Museum, Athens. (May 14-July 31, 2001).

Atopic Bodies is an ongoing project exploring the eccentric and the unregistered ways the human body re-invents itself today. Craig Green questions our perception of the boundaries between beauty and ugliness, fear and safety, presenting an interactive performance and an exhibition of his illustrations and sketchbooks. Scarecrows, Masks, Voodoo Dolls and Witchcraft will be presented in a live performance that will explore the transformation of the human body into a terrifying but yet attractive figure.