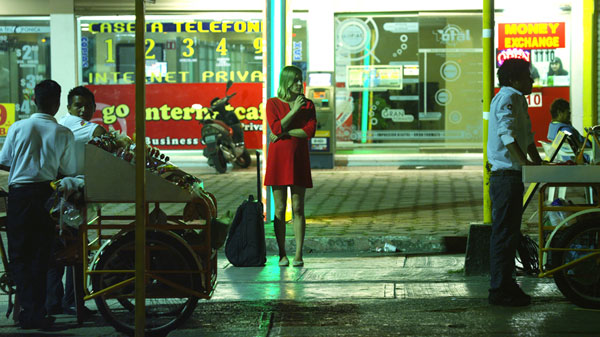 Thirty six nautical miles far from this city’s centre in an unusual but extremely impressing space, a story of those who forgot the essence of human interaction unravels, lost from the fast paces of modern life. This is BLACK MIRROR, the play of the American artist Doug Aitken hosted by Deste Foundation in Hydra. The play’s structure is the story of a nomad that is placed in an environment shaped by phone calls, electronic messages and virtual documents, a context product of the real contemporary world which gradually overlaps it.

The heroine played by Chloe Sevigny in Black Mirror, lives in a world where information eroded human life, where life itself is now rapid, nomadic and shadowy. Human relationships are superficial, impersonal and almost nonexistent.It is a play that likens life with a stream of light that runs in unimaginable speeds on the road’s cement, tackles with those who identify with the road that outstrip the substance and are restless.

Doug Aitken, known for his pioneering artistic creations, presents Black Mirror through an original erythematic project. In the old abattoirs, the exhibition space of Deste Foundation in Hydra, a multichannel video installation is set up specifically designed to turn the space into a kaleidoscope of Black Mirrors.

Simultaneously, a series of performances involving actors, gospel singers and the rock duo No Age, comes at a-again-designed barge that sails between Athens and Hydra.

The theatrical performance Black Mirror is a production of the Athens Festival in corporation with Deste Foundation. The exhibition will run from the 20th June until the 25th September 2011.
Image Source: artaz