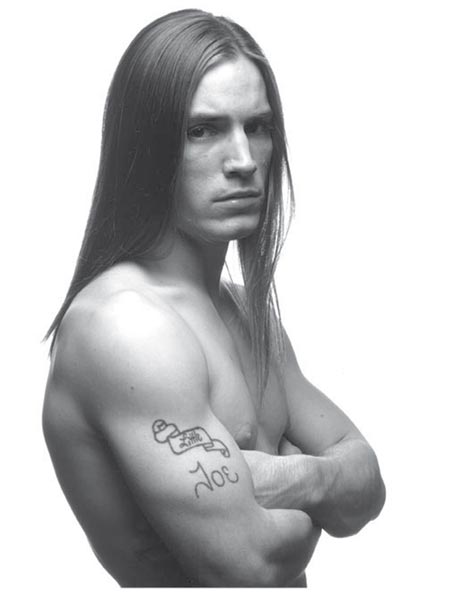 The photograph of Joe Dallesandro’s tight blue jeans and his bulging crotch taken by Andy Warhol still remains
one of the most iconic and cult denim images of all time. The famous photo graced the cover of the Rolling Stones album Sticky Fingers and has created a lot of controversy ever since. The zipper that Warhol designed for the particular pair of jeans and Dallesandro’s probable erection are two of the things that make it exceptional although Dallesandro later stated that the photo was just one out of a collection of junk pictures belonging to the Father of Pop Art. Nevertheless, it is one of the things that have established Little Joe as an underground sexual icon.

Joe Dallesandro was the son of two teenage Americans who proved unable to raise him and his brother, so the boys were placed to foster families. Young Joe was a trouble maker at school and a petty criminal. He travelled to Mexico, L.A. and soon realised that he could use his breathtaking looks to make money. One morning, in 1967, he accidentally walks into the shootings of Andy Warhol and Paul Morrissey’s The Loves of the Ondines and the two artists discover their muse. It was Morrissey’s widely acclaimed Trilogy that brought the underground to the cultural surface and established Dallesandro as the first eroticised male sex symbol on screen and as a modern Valentino representing a liberating icon for his female and gay fans. ‘Flesh’ (1968), ‘Trash’ (1970) and ‘Heat’ (1972) received smashing reviews and are still considered as cult masterpieces. Joe became undoubtedly a superstar at that time and continued to shoot Warhol and Morrissey’s films. In 1974 Dallesandro moved to Europe and took part in various feature films but most of them were unsuccessful and did not earn him the fame and popularity he had received back in New York. Nevertheless, during his European movie era Joe played in the film that was to become his most beloved, Serge Gainsbourg’s Je t’aime moi non plus (1975). In the 1980’s Joe returns to the United States where he holds minor roles in well-known movies like Cotton Club (1984), Cry Baby (1990) and The Limey (1999). Joe Dallesandro’s impact in film, art and even fashion industry remains intact up to today. An on line store sells ‘Little Joe’ T – Shirts emblazoned with an exact large image of his popular tattoo and they sell like hot cakes (littlejoe.bigcartel.com). Last June the National Portrait Gallery in London held a Gay Icons exhibition, where Dallesandro’s captures where among its prominent exhibits. Furthermore, last February Joe Dallesandro received the Teddy award in the 59th Berlinale Film Festival, a special award given to filmakers and artists that promote and contribute to the recognition of the LGBT lifestyle and culture. Michael Ferguson’s book ‘Little Joe, Superstar: The Films of Joe Dallesandro’ gives a detailed account of the actor’s life and career who originated as ‘a sweet, shy, deliriously sexy cipher’. Besides, in 2009 Nicole Haeusser’s documentary ‘Little Joe’ was released. The film attempts to shine plenty of light on the enigma called ‘Little Joe’ and along with Ferguson’s biography they constitute an additional proof that Joe Dallesandro was not just a star of the Warholian system but actually an authentic pop-art icon and a ‘wonderful actor who forever changed male sexuality on the screen’ as Johnny Waters stated.

Why is Liza Minnelli Selling All of Her Andy Warhol’s Paintings?