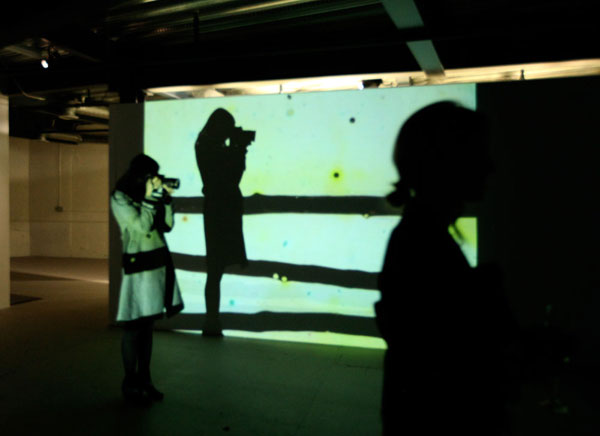 During the event, organised by Los Angeles Nomadic Division-a non-profit art organization committed to support and promote national and international artists, in Los Angeles and beyond- in collaboration with Calvin Klein Collection, a dynamic installation of three films, never before screened in Los Angeles, was presented by LAND artist Jennifer West. In a large open space, multiple spastic video projections pulled you in – colorful, intriguing, and apparently the perfect thing to make stunning shadows as people passed in front of them.

The Los Angeles-based West makes 16mm, 35mm and 70mm films by manipulating the film celluloid to a level of performance. The film emulsion might be doused with perfume, alcohol, mascara or pepper spray, skateboarded on, kissed, or dragged through  pits. West’s practice is characteristically influenced by urban mythology, folklore and popular culture, and often addresses issues of the body, of gender, and of self-presentation.