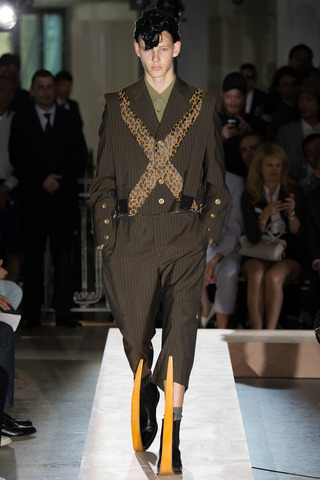 Rei Kawakubo has never clearly declared of doing politics through Comme des Garçons. This does not mean that she is not a thinker or that she can remain unmoved by the times. She is reacting to her incentives and they are imprinted on her creations. And lately, multiple cases of violence and human rights’ encrochment in Ukraine, Syria, the bloody attacks at US schools, the kidnapping of 276 Nigerian schoolgirls by Boko Haram extremists create a scenery “of war”, an extreme image, indicative of current reality, which resembles a minefield. At any time, a wrong step can energize a bomb. And the bomb will destroy everything around it, leading to a domino of successive changes.

Deconstruction was her means, for another time. Not sο much in the meaning of a visual art, but more as a conceptual process. She presented “Soldiers of Peace”, something literally impossible. For Kawakubo, though, it was the axis she chose to follow. She used war tools in order to fight against it. The military jackets, the shoes and their evolution, everything was a feature and a reference to a raging war, that has surrounded us. The individual parts work in such way, so as to evince and reproach themselves. By examining these parts, one can see the references. The animal prints and the nets -in more than one versions- are nothing more than the beast human can hide, and the cells where it should be prisoned. The purple suit in a not really perspicuous colout tone, but somehow “dirty” would talk about luxury, which is now superficial. In order to earn it, ine should defy and be idifferent to the rest -besides we live in an era, during which altruism and personal interest is exploited strategically and commercially, more than ever before.

Last, but not least, are the shoes. They are named Krakow (from 14th century’s capital of Poland). The poulette’s length varied, according to one’s social status, and during war -more precisely during the battle of Nicopolis in 1396-, the poulette would be removed, so as the soldiers would not be impeded from running. Not only Kawakubo did not remove it, but she elongated to such a degree, that it could touch the knee. It blocks running, even walking.

Slogans such as “Anything war can do, peace can do better”, on her closing jackets, clarify her intentions. Rei Kawakubo placed her protest-wondering on a narrow catwalk, which imposed physical contact between the models and the lightings created a polemic shadow theater. Her “peace makers” attributed a politic character to this Paris Fashion Week. She responded to her surrounding reality and proved that reality is finally, the actual inspiration source.