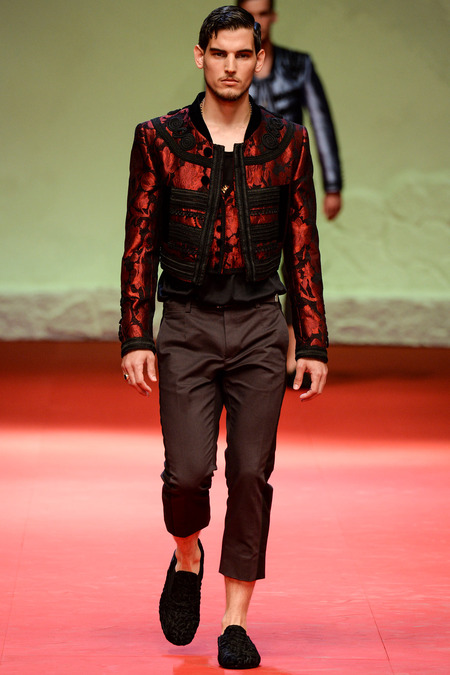 Sometimes judging a creator can be really difficult. What is this that you should judge? Their theoretical background, their result, their technique?

Dolce & Gabbana have been using Sicily, birthplace of the former one, as their inspiration, and they are creating a puzzle, a story, goal of which is not to project the island, but give rise to their audience in order to explore the island’s multiple sides on their own. And in such way, by slowly analyzing its history, they have come across the Spanish domination during the period 1516-1713. It’s an era, also known as the Sicilian Baroque. A period during which the island’s economy blossomed, while architecture evolved drifting simultaneously the rest of the arts. How matchy for the condition at the Dolce&Gabbana as a company right now!

However, when they had to move from the idea to the realisation, from theory and history to action and the reality of 2014, they got lost, as if they were influenced more than needed by the “conqueror”, as if they were designing, having in mind only the Spanish bullfighter. The short jackets, the printed bulls on T-shirts, the trousers -a little over the ankle-, everything relegated to  the arena, while the -indisputably really cute- dotted textures refered to flamengo dresses -despite the fact it is a cultural element that the Spanish never introduced to Sicily. And though their pursuit was to present the Iberian-influenced Sicelian, they did show something completely different, that could only be seen as a continuation of their past narrations, only after searching for it.

Questioning their sartorial training is somehow inappropriate. From embroidered details and sandals, up to three-piece suits, everything remained a true sample of their abilities, another proof that -despite all the commotion and legal issues they are facing-, Domenico Dolce and Stefano Gabbana still know how to create beautiful garments.

During the finale, the models wore red suits, projecting  that -like in many parts of their collections or the catwalk- the duo neglected something really important for their bullfighter. That he should never wear red. Would things be better if they did not insist in that? Probably not.