Thom Browne Spring/Summer 2015: A Not So Bright Future #PFW 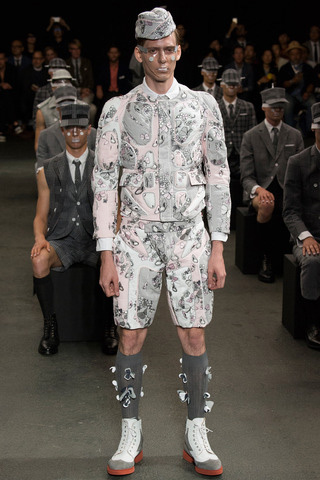 Thom Browne has created his own world, totally personal. It’s a universe, influenced by the past, the present, traveling though, towards the future. It’s never distinct whether one is part of it or just one of its external viewers. Neither if this universe belongs to a future based on past pursuits, or if it is the continuing we must expect. He gives small pieces as a bait, in order to explore it. And as long as one searches, the more they want to learn. It’s a world equally unique and addictive.

The setting with its futuristic references, could have been that of a 70s cult movie, which presents a fictitious future, an imaginary -by then- 2014. And now that this future has arrived, Browne either derides it or reproduces it as the future of 2014, this time. Like an oracle, that has not been confirmed so far, but it does not forbid its realisation. And bearing in mind that the soundtrack was borrowed by the sci-fi movie TRON, the second interpretation could stand. Maybe not, given the fact that Browne is a designer that doesn’t like easy solutions. He loves to pester and be pestered, inside his humor and irony.

And this time, he was pestered, since he had to solve the mystery of the relation garment-body. Which is the one that prevails over the other or even better, which is the one that doesn’t manage to prevail over the other? There was no clear answer, more of a narration of the two possibilities. On the one hand, square cuts, shaping the body and extending it up to where the future cloth(?) will be able to do so. And on the other hand, garments that accent the inlaid muscles of the models, like a child’s Halloween costume. It is maybe what Browne thinks of future super heroes. That they are a fraud and nothing more. That people can only count on their own body and spirit, and not on the false and superficial image of an abnormal effect.

The masks -inspired by 1976 “funny” horror movie Alice, Sweet Alice- make this impression even more intense and take it one step further. This abnormal effect makes as all the same. A feature that has already appeared, but Browne finds that this repetition not only won’t be over, but contrary, it will be augmented as a phenomenon. Certainly, futuristic movies of the past would talk about an army of identical people and -no matter that the reality of the self-same image is a fact- their predictions have not been verified. As long as there are people capable of thinking, maybe we are still far from this classification.

Maybe this is what Thom Browne’s collection lacked of. He did not present an alternative, as if he had lost  his faith to humanity. Sometimes there was the impression he is making fun or deriding it, that he is not acknowledging the failure of past prophecies, and that he is just postponing it. It’s not sure that he is right. We can however hope, than in 40 years from now, we will have earned a life extension for human thought.